I got up at 5:30am.  I was on the deck at 6:00 when land came into view.  We were getting closer and closer to Great Britain.  English warships and sail ships were in sight.  At 11:00am, two English steamships came closer to the Vaterland.  Our ship traveled slower.  The steamships finally connected to our ship.  One received the luggage, the other took on the passengers that were going on to South Hampton.

Our ship stayed in place until 2:00pm, then continued on with full steam.  Around 5:30, France came into view.  I could see the fortifications on the land.  Again two ships came.  At 7:30, we went on our way.  When it became dark, there was hearty dancing again on deck.  I went to bed at 11:00. 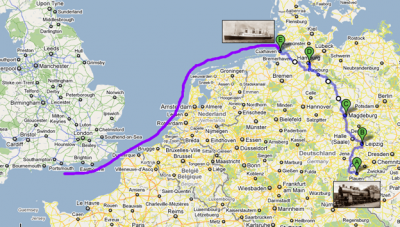 You can read my grandfather’s entire journal by clicking below. It’s quite interesting! Of course, I’m biased! 🙂

We woke up at 5:00am.  At 6:00, we all went to the train station [where his dad took the train back to Plauen].  The four of us got on the 6:45 train to Cuxhafen [60 miles NW of Hamburg].  We arrived at 9:00.  We were invited to board the ship “Vaterland” which stood ready.  [The Steamer Vaterland was built in Germany in 1914, this steamer service sailed from Cuxhaven, Germany to New York City and back. It was the largest liner in the world from 1914-1921. It was seized by United States authorities in 1917 and renamed USS Leviathan. ] We searched for our cabins.  There was a big crowd.  The band was playing.  More and more people gathered on shore.  We got off the ship and went to have lunch.  When the extra trains had arrived, we quickly went back on board.  We noticed that hundreds of people were waving their handkerchiefs and shouting farewell greetings to us.  We did the same.  The ship left shore exactly at noon.

When the ship was brought to the open sea, the ship’s propellers were set in motion with increasing speed.  The German homeland disappeared in the distance.  I looked the ship over a bit.  At 3:00 the call to coffee came.  After that, there was more activity on deck.  Music was made with an accordion, while some Bohemian country people were performing their dances.

Occasionally, a ship was visible in the distance.  The seagulls were following behind the ship.  When one looked at the waves created by the ships propellers, it was a wonderful spectacle.  It was 6:00 when, suddenly, a heavy rain began and it continued through the night.  At 7:00, the bells chimed for the evening meal.  It became stormier and the ship swayed a little.  Despite the disturbance, there was still dancing on the deck.  I added to the concert with my harmonica.  I went to bed at 11:00.

Click here to watch a video about the Steamer Vaterland complete with some incredible vintage videos and photographs.

I got up at 8:00am in order to go to the luggage drop-off place.  I went to the Hamburg harbor and, just then, a Z3 [zeppelin] was passing by in silence.  I continued to view the harbor and later the area of St. Pauli-Landungsbrücke.  After a three hour walk, I got to the receiving location and took care of the things I had to do.  Next, I went to the train station in order to pick up my dad.

I still had an hour and a half wait, so I went to the café Klosterecke.  Traveling on the same train with my dad, were Mrs Traeger, her female sleeping partner and Mr Steinbruder, [who also had passage to America].  We all went to “HAPAG” and then we started to search for a hotel.  [HAPAG stands for Hamburg Amerikanische Paketfahrt Aktien-Gesellschaft (Hamburg American Packet-shipping Joint-stock company) and was commonly called the Hamburg America Line. It was the largest German, shipping company, serving the market created by the German immigration to the United States and later immigration from Eastern Europe.] We spent a considerable time together.  We took a streetcar to St. Pauli, where my father stayed behind, and I took them on to the luggage reception area.  At 1:20 in the afternoon, we returned.  The three of them toured the city, while I stayed to be with my father.  Dad and I took a walking tour of the city and arrived at the hotel around 9:00pm.  We went to sleep right away.

After obtaining my passport and papers, I was on a train headed for Hamburg.  I went per express train from Plauen [A on map] at 6:02 in the morning to Leipzig [B].  There was a layover of two hours, so I visited the “Battle of the Nations” monument.  At 10:25am, I left per train thru Magdeburg [C] to Hamburg [D] arriving at 4:25pm.  I bought a ticket for the ship and after a lengthy search, I found the Hotel Minerva at the corner of Lolienstreet and the Repperbahn.  The price for overnight was 2,16 Mark per day.  [That’s about $35 today.]   I wandered around the city for awhile.  That evening at 8:30, I went to see a musical at the Varsity St. Pauli Singspielhalle until 10:45 and then I let myself be photographed.  At midnight, I was in my hotel room and fell asleep. 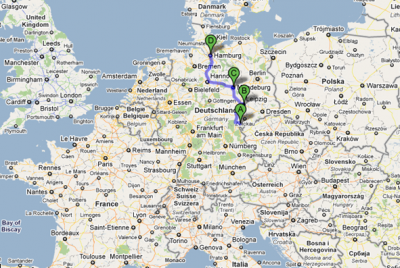