I created this short teaser video to introduce you to my Unisonic PONG Console that I played with when I was 7 years old. It still works great!

And if that short 4 minute teaser left you wanting more, then you’re in luck! You can also watch a 19 minute detailed walk-through version where I spend time giving the history of Pong clones and my teenagers also help me play all of the games on my Unisonic Tournament 2000!

Pong clone consoles were all the rage in the mid to late 1970’s. Mostly because several chip manufacturers started selling pong-on-a-chip micro-chips or integrated circuits.

My Unisonic Tournament 2000 model Pong clone console is not really all that rare. They were very popular in 1977 and gently used working models can be found and purchased pretty easily, even today.

I created this short teaser video to introduce you to my MERLIN handheld electronic game that I played with when I was 8 years old. It still works!

And if that short 1.5 minute teaser left you wanting more, then you’re in luck! You can also watch a 23 minute detailed walk-through version where I spend time explaining and playing each of the 6 games!

Here’s the classic Merlin commercial from 1978! If you were alive then, you will surely remember it! Good luck getting this ear-worm of a jingle out of your head!

“Merlin is a computer with personality! Plays 6 different games! Talks with 20 sounds!” I love the marketing creativity!

And here is commercial number 2 from 1980! They used the same ear-worm of a jingle with different lyrics.

Merlin was invented by former NASA employee Bob Doyle. I think he may have created this website called TheElectronicWizard.com which has an awesome interactive Merlin app which actually lets you play with Merlin right in your web browser! Incredible!

I created this 20 minute video to introduce you to my 2-XL toy robot that I played with when I was 8 years old.  It still works!

Here’s the website that I got the image of the internals of an 8-track tape from that I used in the video.

And here is a full resolution map of the 2-XL General Information user experience (click thumbnail): 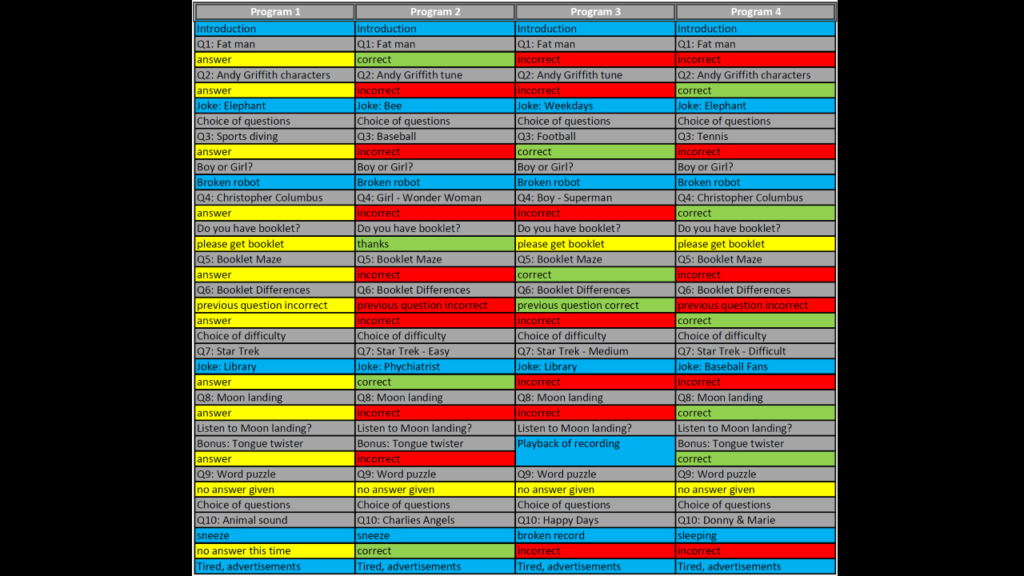 I love this 2-XL commercial!  “Can be used to play any 8-track cartridges!  Teenagers love it!”

If we type this simple 8 line Applesoft Basic program into my working Apple IIe computer, we will end up with a cool little text based arcade game!  Watch the video below to see the game in action!

This small Applesoft Basic program was published in one of my Beagle Bros Apple Software Catalogs from 1987 (volume 0, number 10).  This little program was credited as being submitted by Beagle Bros customer Tim Boehme, who received a box of Beagle Bros magnetic write protect tabs for his efforts!

Applesoft Basic is the programming language of all the early Apple computers and was provided in ROM (memory) to make it available to the user without the need for a startup disk or the need to load it into memory from a cassette tape.

Applesoft Basic was actually created by Microsoft for Apple.  Hence the name.  It is interpreted and not compiled, so it is not very fast.  And it can throw syntax errors at runtime if it’s unable to interpret a line of code.

If you don’t have a working Apple IIe of your own to try your Applesoft code on, you can first try it in a JavaScript implementation of Applesoft Basic.  There are some things that this emulator cannot do, though.  It’s just not terribly robust.

A very robust option is the standalone Apple II emulator program that you can install onto your Windows computer.  It’s called AppleWin.  Just scroll down to the bottom of the Github page and download the latest release.  It’s in a zip file, so just unzip it and run the executable.

Once it starts, just click on the floppy disk 1 icon and choose the master disk file that comes installed with the emulator.  Then reboot with the Apple button and it will boot to Applesoft Basic.  Or, you can download ROMs for various Apple games and programs from the Internet and boot those instead.  It emulates the speed of the processor, so it’s a very realistic emulation of the Apple IIe.  Including several monitor types to choose from.

I hope you found this post informative and/or entertaining!  Thanks for your interest!  And feel free to leave comments or questions below! 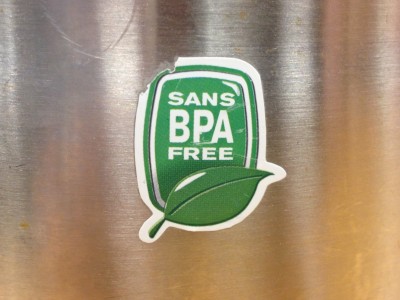 Typically when a label repeats a word in a different language, it it a smaller or italic font or is underneath the English version.  This is an odd choice, to me.  Plus, I think it’s safe to say that most Americans hear the word “sans” enough to know what it means and many people who see this label will not realize that the word “sans” in there for Spanish speaking readers.

I just thought this label layout was an odd choice.  Feel free to discuss below in the comments.