My grandfather wrote in his diary some of his thoughts about his first experience acting on stage back in October of 1916:

We opened with Sherlock Holmes. The director gave me my first opportunity to be an actor as a “John, one from the underworld.” I still feel my knees shaking today, as I went on stage with my English. I will never forget this performance. I had never seen so many people as there were in this first performance on Sunday evening. After the third act the curtain went up and down for ten minutes. The ladies of the company received many wonderful bouquets.

In November of 2001 I was on the on stage at the Cocoa Village Playhouse for my first show there and I can relate to grandpa’s nervousness and adrenaline.  I was “Drake the Butler” in Annie the Musical, and I will never forget that show and all the wonderful cast and crew that were involved.

My German immigrant grandfather in Peoria wrote the following account in his diary in the fall of 1918.  It’s sort of timely due to current health events going on around the world right now.

It’s been five weeks since I last wrote anything. There have been great changes in Peoria and the world. Since the beginning of October, in almost all the states of America, a terrible epidemic has broken out, called the “Spanish Influenza.” It was most notable in the barracks among the soldiers. It begins with a cold, then a fever and so on until pneumonia sets in, and most die. I was sick with it. I immediately went to the doctor and spent three days in bed. Since I did not have any real care at home, I suggested that I go to the hospital. After two days in the hospital, I felt much better. I was there for a week. All I needed was a good rest, which I received. I did not go back to work right away and the expenses cost me a lot of money. I had used up all my savings.

After reading up on the Spanish flu, I realized that he’s pretty lucky to have made it through alive. According to wikipedia, the 1918 flu pandemic which lasted January 1918 through December 1920 was an unusually deadly influenza pandemic. It infected 500 million people across the world and killed 50 to 100 million of them — three to five percent of the world’s population — making it one of the deadliest natural disasters in human history.  Wow.  Can you imagine losing 3 to 5 percent of everyone you know?  That’s a lot of friends and family to lose from this one flu. 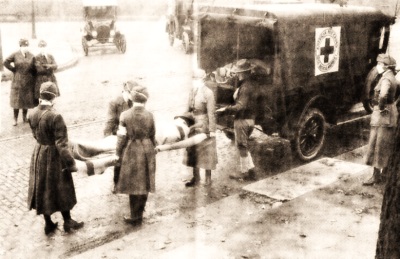 Most influenza outbreaks disproportionately kill juvenile, elderly, or already weakened patients.  But the 1918 pandemic killed predominantly healthy young adults. Modern research, using virus taken from the bodies of frozen victims, has concluded that the virus kills through an overreaction of the body’s immune system. The strong immune reactions of young adults ravaged their bodies, but the weaker immune systems of children and older adults resulted in fewer deaths among those groups.  Amazing.

Why was it called the Spanish flu?  To maintain morale, wartime censors minimized early reports of illness and mortality in Germany, Britain, France, and the United States, but papers were free to report the epidemic’s effects in neutral Spain creating a false impression of Spain as especially hard hit — thus the pandemic’s nickname Spanish flu.

My German immigrant grandfather wrote in his diary some of his thoughts and experiences during the first world war against Germany:

The Emperor’s days are numbered. Almost every day here, boys are leaving to get soldier training. I went to many farewell parties for my friends.

In March, I bought a war bond for $100 which I can redeem in 1928 for an additional four and a quarter percent interest. Big Freedom, Red Cross and many other parades are being held from time to time.

After July 1st all men in store positions, waiters, theater employees and so on must look for a spot in factories and women are taking their places. Five million men were sent to France in order to beat the Emperor. I hope the war will find an end soon.

I believe you feel sorry for me, but do not fear, all Americans treat me well. All German language was exterminated in the schools and even in the churches. The high schools have burned all German books. You can’t believe how everyone hates the Emperor, even I.

If what all the papers write is true, it must be horrible. Prisoners are being treated badly. Arms, ears and noses are cut off and they are being hanged. Belgian and French girls, women and children are murdered, burned alive and buried. The hospitals are bombed. In an American theater, a picture was shown entitled “The Emperor, Beast of Berlin” and a man in the audience was so angry that he shot at the screen in his rage. He made a big hole in the white curtain and said, “If I can’t get him there, I will get him here.” I could relate a thousand things of how hated the Emperor is, but soon they will get him and then it will be the end of the war.

This was a big day. All men from eighteen to forty-five have to register. In Peoria alone, 14,000 men had to go. When they are all deployed, it’s good night Germany. I wished I could go too. I am safe and sound despite the fact that, now, I don’t have much money. All my savings are being used up. Food and clothing are very expensive. I hope the war will be over soon.

My grandfather wrote in his diary in the summer of 1916 that he had worked for the Neptuna Carnival in Peoria.  My dad’s recent research into this Neptuna Carnival revealed the following article from The Peoria Transcript, Sunday July 2, 1916:

The Neptuna Carnival will open tonight with a concert program given by the famous Liberati band of fifty musicians and company of opera singers. This concert will be given from the Island Beautiful in the river directly in front of the grandstand. There are over 10,000 seats in the grandstand. at 25 cents each. The concert will begin at 8:00 and according to the advanced sale of seats will have a really remarkable attendance. The ballet, which is to present a marvelous spectacular ballet on the Island Beautiful on the night of the Fourth in honor of the coming of Neptuna.

The entrance of the Court of Honor, which has been erected on lower Main Street near Adams and on the parking lots of the river front, is a sight of majestic splendor and pure architecture, with its columns gleaming white. It frames a vista with the sparkling blue of the river and the green hills as a background. When the thousands of incandescent monster lights, which have been placed for the illumination, are at last alight, the Court will present a vision of beauty not soon to be forgotten.  The river front will present a decidedly festive and carnivalesque appearance with many booths and tents having sprung up during the day.

Ten thousand seats on the riverfront?!?!  Wow!  Sounds like a great time, doesn’t it?  I hope someone has photos of this 1916 spectacle that they can share on the Internet.

I realized that I was on the last ship to come over to America from Germany, for on August 1st World War I broke out in Europe.  I still had good fortune.  I didn’t know that there was a war going on, since I couldn’t read or understand English yet.

According to Wikipedia, the SS Vaterland had made only a few trips when she arrived at New York City in late July 1914 just as World War I broke out. A safe return to Germany was rendered virtually impossible by British dominance of the seas, so the ship was laid up at her Hoboken, NJ, terminal and remained immobile for nearly three years. She was seized by the United States Shipping Board in April 1917 and turned over to the custody of the U.S. Navy in June 1917.

As a direct descendant of Kurt, I can’t help but imagine how different my life would be if his trip to America had not occurred exactly when it did.

That’s all the journal entries from his initial introduction to America, but there’s a lot more to read.  He continued to journal for several years on topics such as living and working in Peoria, the war from the perspective of a German immigrant, the terrible winter of 1917-1918, getting the Spanish Flu, finding love in America, and much more.