I woke up at 7:30am this morning and had a banana smoothie on my front porch, sitting in my Adirondack chair, obviously.

I might as well show you this chair that I keep bragging about.  I built it myself and I made templates and plans so I could make more of them.  This particular chair is bare pine right now because I have not taken the time to prime and paint it yet.  That is on my list.  But I’m also thinking about making one out of red cedar and leaving it bare to the elements. 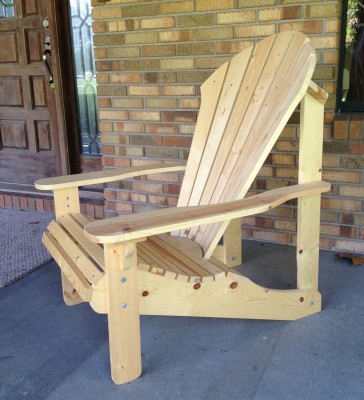 So after I finished admiring my chair for a while, I got busy.  I started by cleaning out my driveway drain which has been clogged with grass clippings for a while now.  Then I brought the garbage cans in from the road.  In my first 5 minutes working in my yard I probably got bit by about 5 mosquitoes, so I performed a little mosquito treatment around the property.  While I was in the mood to kill small biting creatures, I got out my fire ant treatment and treated a number of fire ant mounds that were in the yard.

Then I spent the next couple of hours pulling weeds in my landscaping.  I’ve really let it go for a while now, so it really needed to be done.  It was a lot of work too since it hadn’t been weeded in so long.  I got bit by two fire ants while pulling weeds … both times on two different knuckles.  Far from the best place to get bit.

Note to self: Don’t let the weeds get so out of control!  Sheesh!

After a snack and drink break, I spent probably another hour or so weeding the landscaping.  About this time my back and legs started telling me that it was time to stop or I was going to hurt myself.  So I stopped and took another break.  Then I decided to go inside and eat something for lunch.  No Burger King today.  Today’s lunch was relatively healthy.  It was a chicken wrap containing chicken breast, avocado slices, shredded mozzarella cheese, lettuce, and Italian salad dressing all rolled in a soft tortilla.

I got back to work, but decided to do less physical work indoors for the rest of the day.  I replaced all the doorknobs in all the bedrooms and also in the pantry.  The old doorknobs were the wrong style, plus there was a mix of keyed and non-keyed locks.  While I was at it, I installed some door stops where some have been missing for a while.  Then I installed a mirror on the back of our master bedroom door.  The mirror has been leaning against our bedroom wall for longer than I care to admit.  It was way way overdue for installing.  Then I fixed a broken soap dispenser and picked up the shop a bit and then it was time to eat dinner.  I did some packing in preparation for a Cub Scout campout and I also swept the garage.

My body was now telling me that I was completely pooped, so I sat down at the dining room table and opened up my new tiny little hobbyist computer that I got in the mail the other day.  It’s a Raspberry Pi single board computer running Linux.  It’s just a bare bones board and you have to add a case and all peripherals to it.  It’s about the size of a credit card but it’s surprisingly capable.  It has two built-in USB jacks and an Ethernet jack plus video and audio jacks and an I/O bus.  Out of the box, it has a Python IDE for programming it. 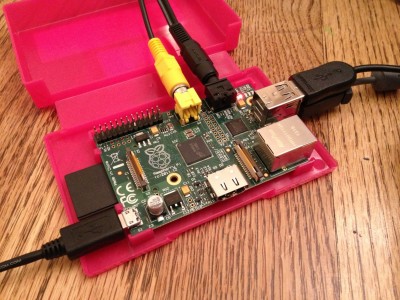 It has an RCA composite video output and also a HDMI video output, but I hooked up the composite output to an old small TV that I had laying around in the shop because it was quicker and easier than hooking it up to my big TV in the living room.  There was a glitch during the first startup and it apparently went to the HDMI output rather than to the composite video output so I was stuck with no video and I didn’t know what to do.  I hit a few keys on the keyboard and the activity light started flashing like crazy.  I have no idea what menu item I launched, but the activity never seemed to stop.  After several minutes I took a chance and power cycled it.  It picked up on the composite video this time, but came up with a corrupt file error.  Of course that’s because I power cycled the thing.  But it left me no choice.  This is a Linux operating system and these things have to be shut down properly or there is a decent chance you will corrupt the file system.  The file system is on an SD memory card, by the way.  No moving parts.  Cool, huh?

It was not difficult to grab a fresh copy of the operating system on the website, but it did take about a half hour or more of downloading and unpacking, though.  But now I’m back in business with my tiny little hobbyist computer.  The computer only costs $35, plus any peripherals that you will need, like a power adapter, SD card, etc. 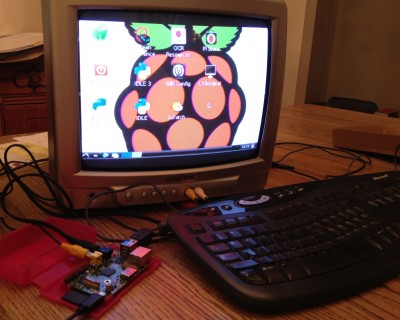 I have a number of projects in mind for this little computer.  But all I had time for this evening was to boot it up and look around the desktop icons a little bit.

So it was starting to get late, so I took a shower and now I’m writing this blog post.  That’s pretty much day three of my unplanned furlough slash vacation.

My to-do list had 38 items on it last night when I went to bed.  Tonight it now has 30 items on it. Now that’s some real progress!  Plus I had some time to play with my new tiny computer!  That makes today a complete success in my book!

What will tomorrow hold for this furloughed government employee? Stay tuned! 🙂