Today I slept in till 10am because I was up pretty late last night working on my computer.  After getting up, I caught up on my Facebook news feed and threw in a load of laundry.  Throughout the day today I put laundry either in or out of the washer and dryer in between other tasks I was working on.  At the end of the day I had washed and dried 4 separate loads of laundry.  Yay me!  🙂

I know I should exercise more often than just once a week, but this is all I’ve motivated myself to do so far.  Today I fast walked for just over three miles while listening to my Adam Ant station on Pandora on my phone.  It was a nice cool morning today and it feels like Fall is trying to make an appearance in Central Florida. 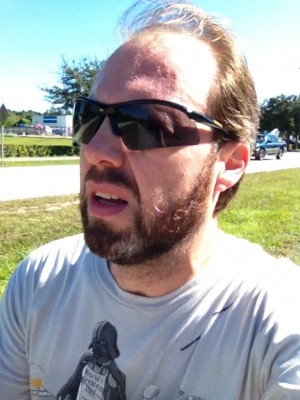 It’s weird that the Adam Ant station plays Duran Duran, but the Duran Duran station does NOT play Adam Ant.  What’s up with that, Pandora?  Are they similar to each other or not?

I want to thank my sister and her friend Missy and also my friend Mick for introducing me to Adam Ant along with lots of other great British music in the early 80s.  I was probably 12 or 13 years old which is probably too young for many of the lyrics in Adam Ant’s songs, but I was probably not understanding the lyrics anyways.  I think I turned out okay, regardless.  Now that I’m older and wiser and actually paying close attention, it seems to me that Adam Ant sang mostly about sex, but he also sang quite a bit about pirates and also a little bit about native american Indians.  Weird.

I tried to beat my fast walking time from last week, but I was not successful.  Trying to take my own self portrait while fast walking may have been a factor.  I’m not quite coordinated enough to work the camera on my phone without slowing down, I suppose.  After my little hike was over, I passed a yard sale walking back to my house, so I quickly checked it out.  There wasn’t anything there that I needed to have.  As a matter of fact, I noticed a pair of gently used men’s underwear and also some sexy women’s lingerie.  That’s real classy, people.   Real classy.

Then I sat in my Adirondack chair on my front porch for a while and enjoyed a banana and papaya smoothie.  I caught up on my email while I sat there and I also sent out some feelers for any potential TV or film background talent needs that might be currently active in Central Florida.  I’ve done some extra/background work in the past and I wouldn’t mind doing some now since it would not conflict with my NASA work schedule.  So if you know of any leads, please let me know.  Thanks.

After I pried myself up out of my comfortable Adirondack chair, I went into the shop and changed out my old mower blades with a brand new set.  I was not able to get them off the other day by hand, but I borrowed an air powered impact wrench the other day from a friend and it worked like a charm.  I have a convenient setup in my shop where I can lift up the front of the mower using a cable winch puller (a.k.a. come a long winch) inside the doorway between two rooms in my shop. 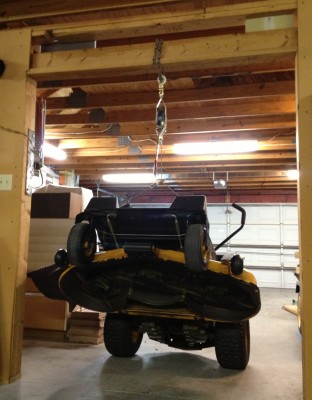 Notice that the winch is attached to the header in the doorway which is essentially a strong beam that is designed to support a load.  The rafters/trusses that you can see in the background of the photo (that the lights are attached to) are not designed specifically to support a heavy downward load applied at the lower horizontal members.  Those horizontal members are designed primarily for tension.  You could cause some structural damage if you applied heavy loads to those horizontal “beam” looking portions of the trusses.  So be careful.

There is a really simple diagram on this website that shows the forces on a typical truss.  Scroll down a page or two till you see the blue arrows.  (Some of the arrows should show compression and some should show tension, so it’s not perfectly accurate but you get the idea.)

After I put on the new mower blades, I took them for a test drive.  They worked beautifully.  They sounded great and they cut like butter.  It felt kinda like walking in a new pair of shoes.  You feel light on your feet and empowered to go places.  With my new mower blades I felt like I could take on the world … or at least a few large yards.  My yard doesn’t need cutting for several more days, though, so I put the mower away and went looking for my next task.

I realized that I was starting to get hungry, so I went inside and ate my leftover Mr. Submarine sub sandwich from yesterday.  Then I installed trim around the fireplace brick in my living room.  This has needed to be done for two years now … ever since we bought this house … but I’ve been busy and this was not one of my highest priorities.  Don’t judge me … it’s done now.   🙂

It wasn’t exactly a simple job.  Most trim is just nailed into the bottom wood plate of the wall.  But this fireplace trim had to be installed in the direction such that the tall dimension was laying against the brick and the thin dimension was laying against the drywall.  That left me no place to nail the trim to, so I had to glue it.  I used Liquid Nails Indoor Projects adhesive and then I nailed some finish nails into the drywall to hold the trim tightly against the brick while the adhesive dried.  After I remove the finish nails from the drywall, I will have tiny little holes right along the new trim to patch and paint.  Oh well.

This odd installation direction is partially because the gap between the drywall and the brick is too large for the thin dimension to cover, but partially because it looks pretty good this way.  After I got my tools put away, I sat down and did some planning for going out in my canoe tomorrow.  The plan is to go out bright and early in the morning, unless it’s real windy.  It’s no fun rowing a canoe against a stiff wind.

Then I ate dinner which was popcorn shrimp wrap … popcorn shrimp, mozzarella cheese, lettuce, Italian dressing all rolled in a soft flour tortilla.  After dinner I spent an hour or so pulling stuff together for canoeing in the morning … including strapping the canoe to the top of the SUV.  Then I showered and now I’m writing this blog post.  That’s pretty much day eight of my unplanned furlough slash vacation.

What will tomorrow hold for this furloughed government employee? Stay tuned! 🙂