Wow.  I don’t recall actually watching this 2 hour television spectacle when I was 8 years old.  But maybe my subconscious blocked it from my memory.  It had good reason.  This was probably the worst television variety show that was ever made.

And that’s saying a lot because there were a lot of really bad variety shows made in the 70’s.

It’s like watching a train wreck.  It’s so horrible.  And yet you cannot look away.

Try it yourself.  This YouTube version is just over an hour and a half long because all the commercials have been removed.  There is some copyrighted content in this version so if it gets taken down, just search the Internet for another version.

George Lucas isn’t really to blame for this travesty.  He did not produce it.  He did not direct it.  He did not write it.  He didn’t even consult on it.  He was starting to work on his follow-on to Star Wars, The Empire Strikes Back.  He did greenlight the Holiday Special, though.  And that started this big ugly snowball rolling downhill.

The special was broadcast only once on Friday November 17, 1978 which was the week before Thanksgiving. It aired on the CBS television network from 8pm to 10pm, which pre-empted both Wonder Woman and The Incredible Hulk.

And then everyone promptly tried to forget it ever happened.

In case you don’t have the stomach to watch a recording of the entire special, I’ll summarize.  The main characters from the Star Wars film were in the television special.  Reluctantly.  In several scenes it appears their hearts were not really in it, though.

Most variety shows had been filmed in front of a live studio audience or at least had a post-production laugh track added.  This special had neither.  So every time an actor tried to say or do something funny, the viewer got an uncomfortable feeling like something odd just happened.  It’s like when you tell a joke to a room full of people and all you hear are crickets chirping.

The plot, if you can call it that, is very very boring and pointless and only serves to tie together several musical numbers and some attempts at humorous skits.  I’m not even going to try to summarize the plot here because it is so long and boring.  It centers around Chewbacca’s family on his home planet, though.  The main characters in the show are Chewie’s wife, son, and father. 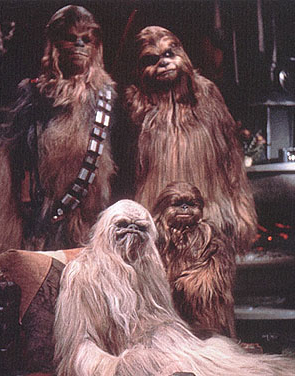 The best part of the show is an animated cartoon that features the debut of a new character named Boba Fett.  You may have heard of him.

If you suffer through all the way to the end, you will get a special treat.  The final musical number sung by Carrie Fisher as Princess Leia.  She’s not a terrible singer.  But the whole scene is just as uncomfortable as the rest of the show.  And the finale isn’t at all inspiring, as it intends to be.

Thanks to Josh and Chuck of the Stuff You Should Know podcast for bringing this production back up from the annals of my subconscious and forgotten memories.

And thank you for reading this!

One thought on “The Star Wars Holiday Special (1978). What has been seen cannot be unseen.”