I just returned from a trip to Krakow, Poland last week where I was speaking at a software developer conference.  I posted details of that experience here.  This post, however, is dedicated to the sightseeing I was able to squeeze in while I was there.  I only had my iPhone 5S on this trip, so I will apologize in advance for the quality of  some of these photos. 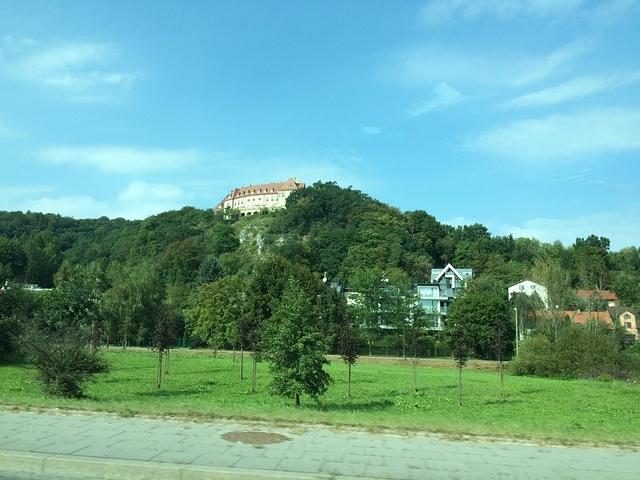 The Wawel Castle and the Vistula River are both important landmarks of Krakow.  The river is the longest and largest river in the whole country and it snakes through the entire city.  The castle sits prominently on top of Wawel Hill and is one of the most historically and culturally important sites in all of Poland. 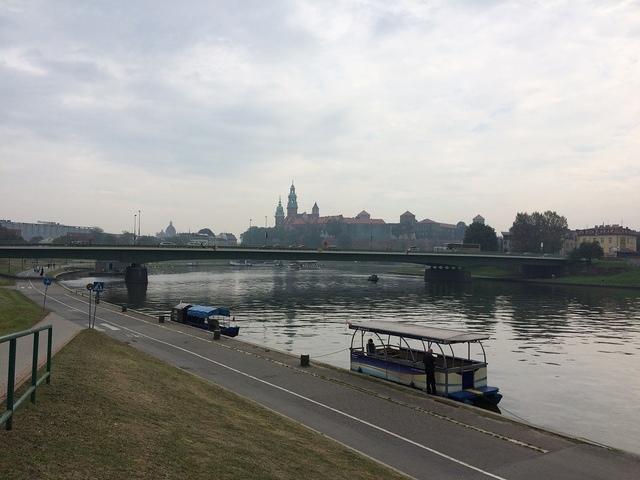 Here’s a close up photo of Wawel Castle at night. 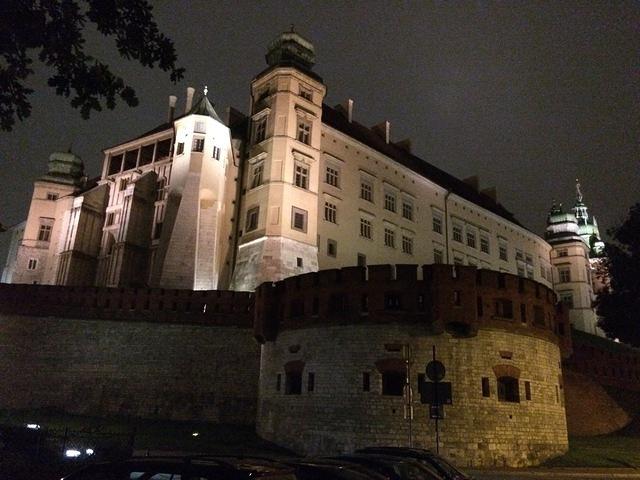 And here is another photo at night, but from across the river. 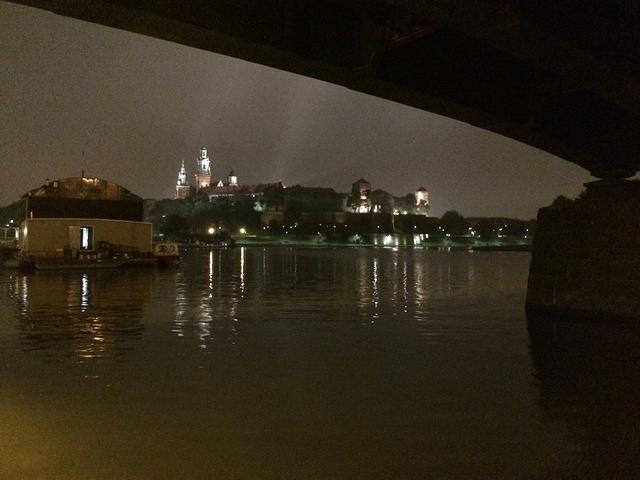 In the center of Krakow city is Rynek Glówny, which means “main market” or “main square”.  It’s a large medieval town square, dating back to the 13th century, surrounded by palaces & churches.  It’s a wonderful area of town and it’s a huge draw for locals and for tourists both during the day and at night.

Here is a photo of Wieza Ratuszowa, or “town hall tower”, which is a renovated Gothic tower that used to be just one part of the town hall, but is now a museum.  I regret that I did not have time to visit any of the museums in town while I was there. 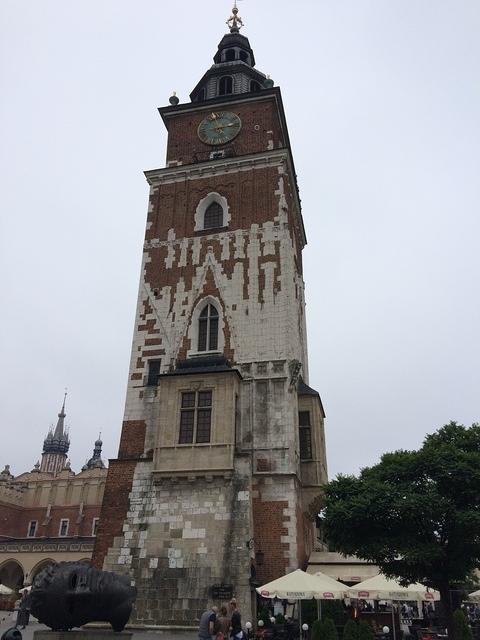 This building, also in the middle of the town square is The Cloth Hall which is a Renaissance-style market hall lined the entire length with stalls of locals selling goods.  It also contains a museum. 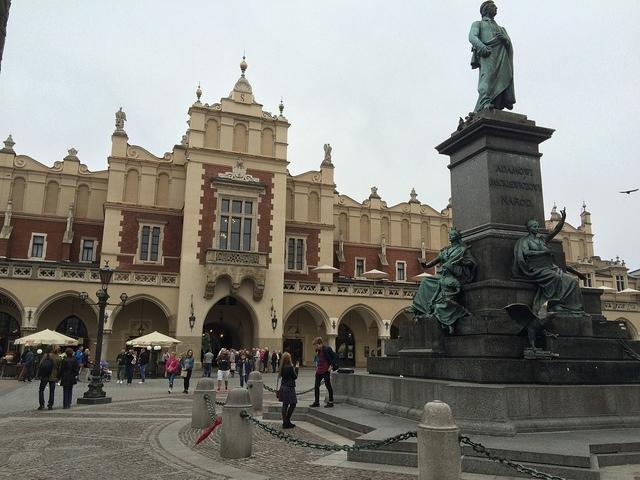 The main visual Gothic standout of the town square, though, is St. Mary’s Basilica, which is a huge Catholic church with 2 tall asymmetrical towers.  Every hour, a trumpet signal is played from the top of the taller of the two towers. The tune breaks off in mid-stream, to commemorate the famous 13th century trumpeter, who was shot in the throat while sounding the alarm before the Mongol attack on the city. 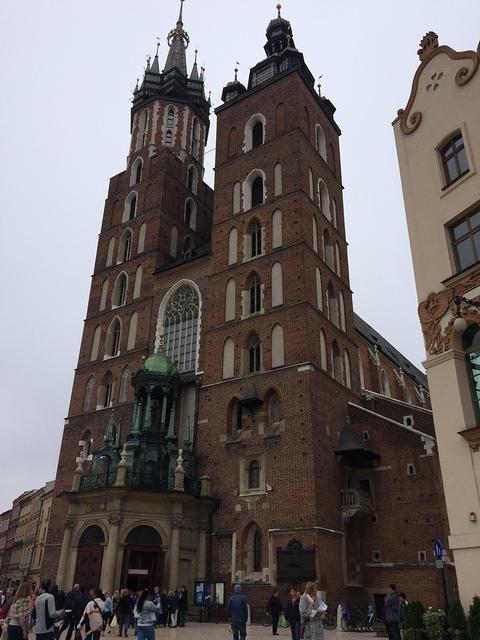 This photo fails to show the size of these huge doors since no-one is in the photo for scale. 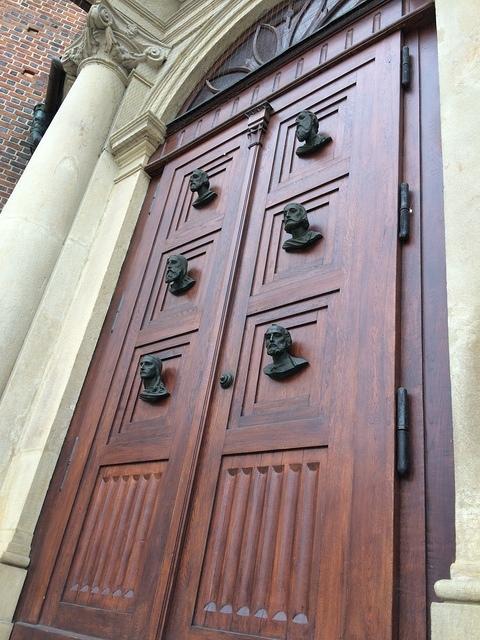 The entire perimeter of the town square is lined with outdoor seating for the various restaurants and bars that make up the majority of the storefronts. 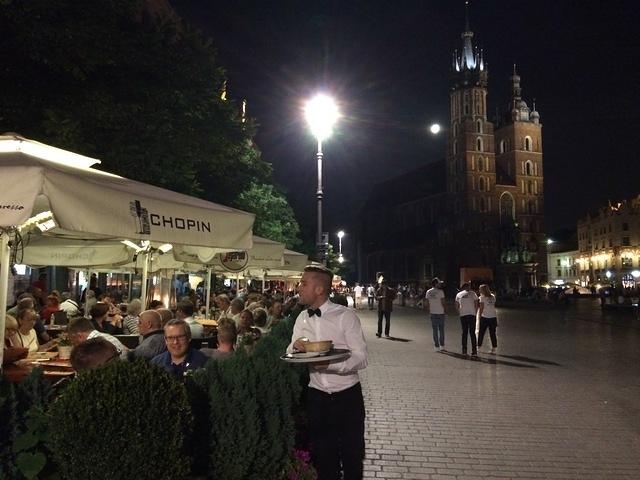 Street performers sprinkle the town square.  All day and all night. 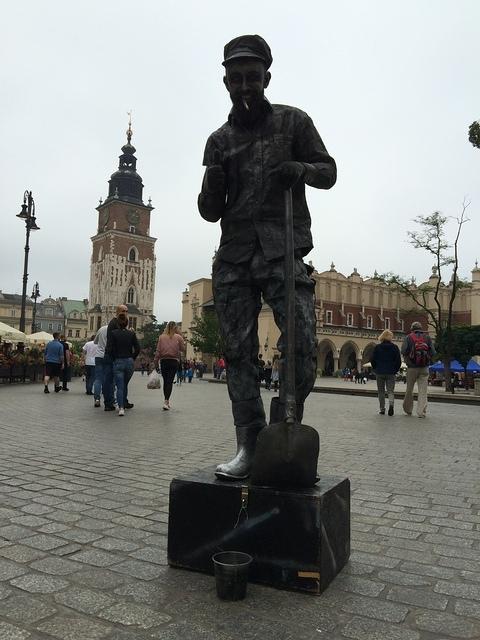 And also the side streets leading to and from the town square. 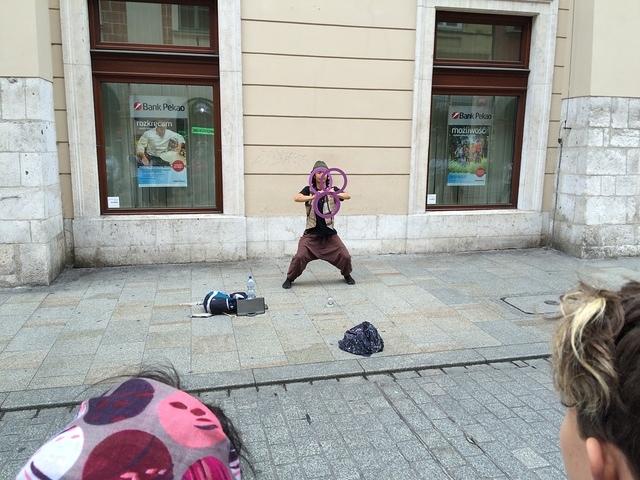 This is sort of random.  Meet Polish banjo playing Abe Lincoln talking on his smart phone! 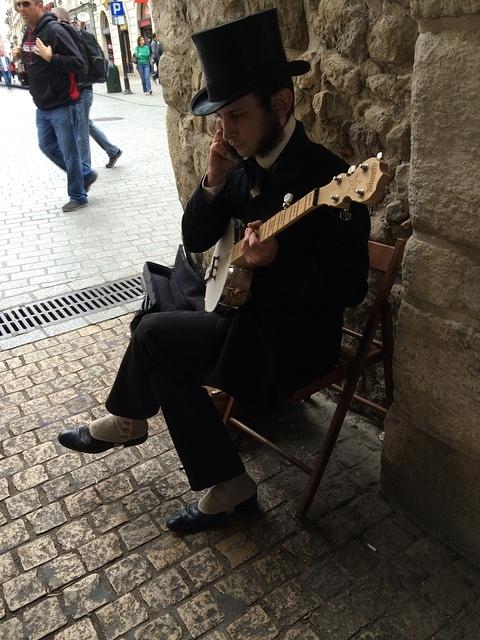 I’d like to see what’s under the hood of this street performer’s act.  She just sat there motionless.  What exactly is holding her up?  She looked very stable with no noticeable wobble.  It’s a great trick. 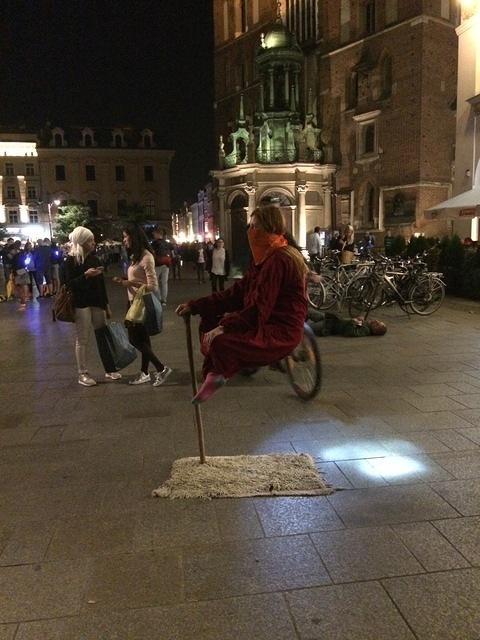 Musicians were by far the most popular choice of street performers.  Both groups and soloists. 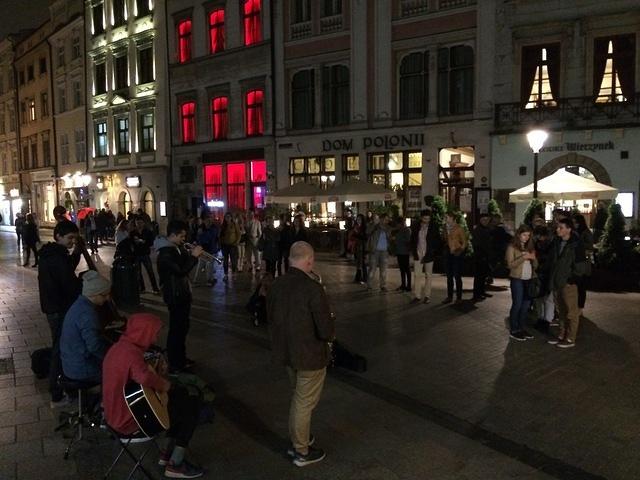 There were lots and lots of horse drawn carriage rides to choose from in the town square. 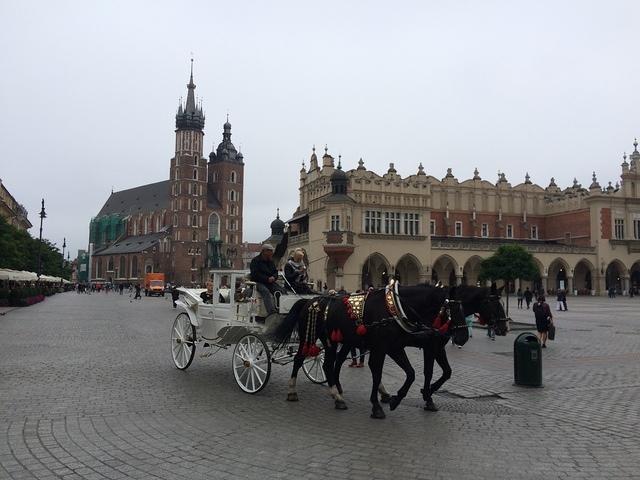 Here is what the inside of The Cloth Hall looked like.  Lots of trinkets and jewelry for sale. 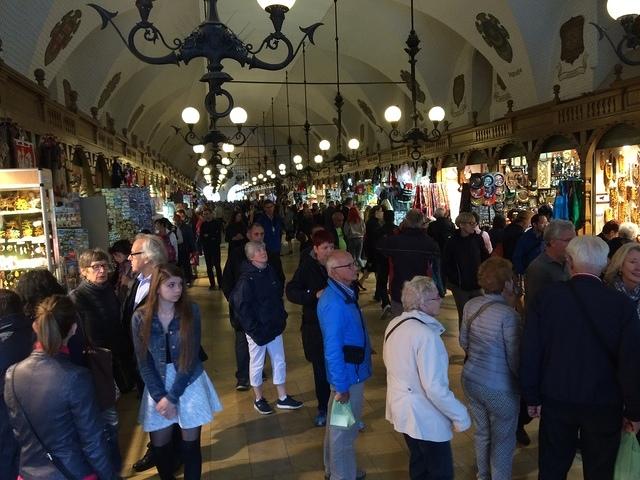 The streets of Krakow were very interesting.  Lots of 2 or 3 story buildings of various architecture styles.  Lots of narrow streets.  Lots of odd angles and irregular streets. 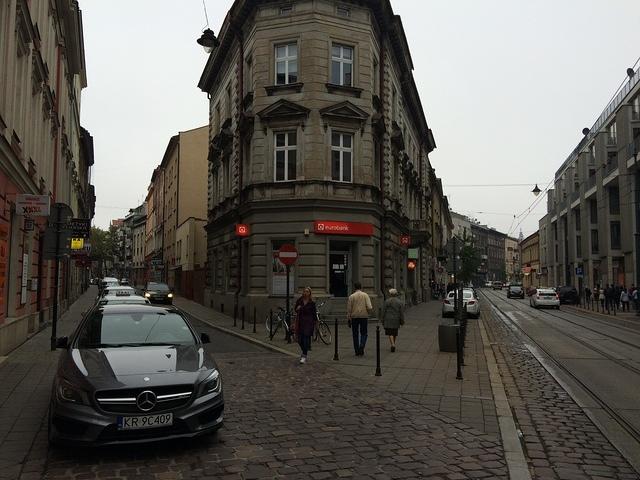 Some buildings are quite colorful.  In this photo you can see the wires that are used to power the street cars, which were sort of a cross between a bus and a train.  They looked a lot like a bus.  But they ran on a train track in the middle of the road. 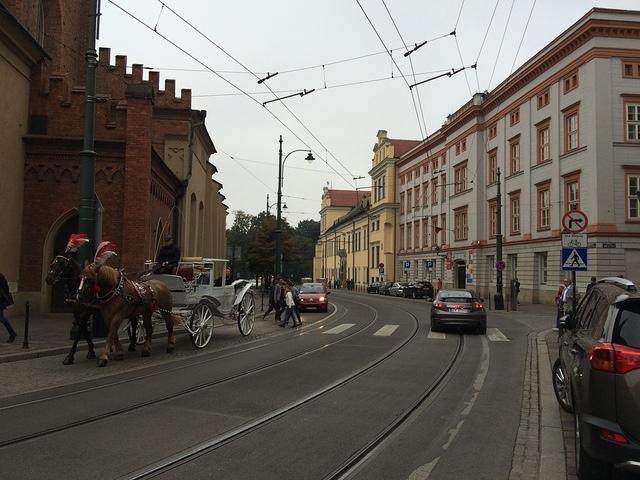 This photo shows a typical street leading towards the town square.  St Mary’s is in the distance.  The streets leading to the square were full of tourist shops selling trinkets, jewelry, food, etc. 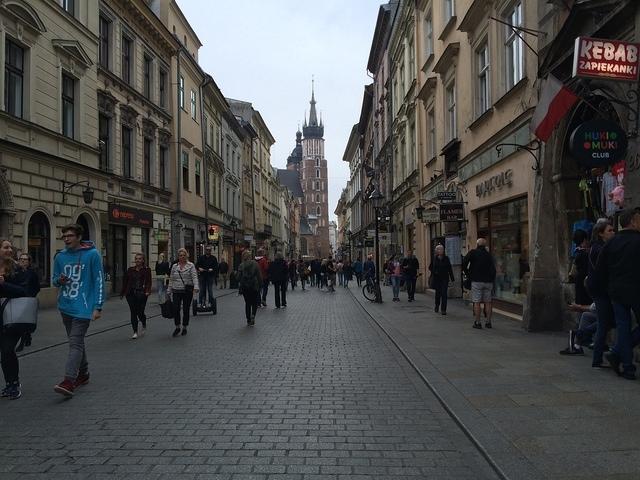 There were a few 3-dimensional bronze maps like this in the notable historical areas.  Very cool.   Wawel Castle is on the far end and the Vistula river is on the other side of it.  In the middle you can see St Mary’s and The Cloth Hall and the Town Hall Tower. 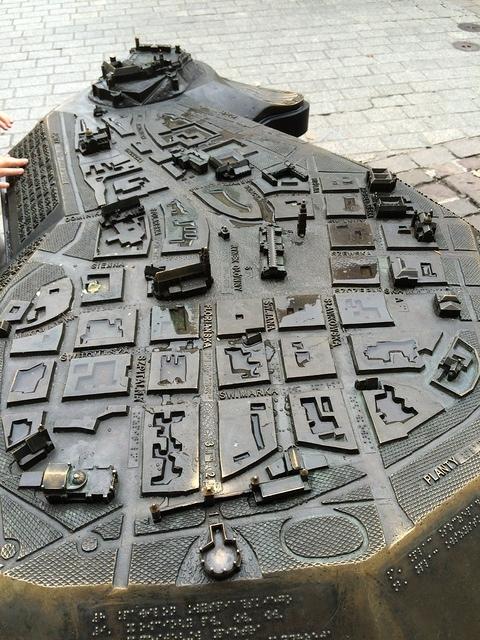 We took a short 30 minute trip down the road to tour the Wieliczka Salt Mine.  It is really cool.  It took about 3 hours to tour it and they told us we had only seen about 1 percent of the whole mine.  It’s huge!  And it’s all hundreds of meters below the surface!

When it stopped production of salt in 2007 it was one of the world’s oldest salt mines in production.  Within the mine there are lots and lots of statues that are carved out of rock salt and also many rooms and even chapels.  Here is a photo of a room with large logs holding up the ceiling. 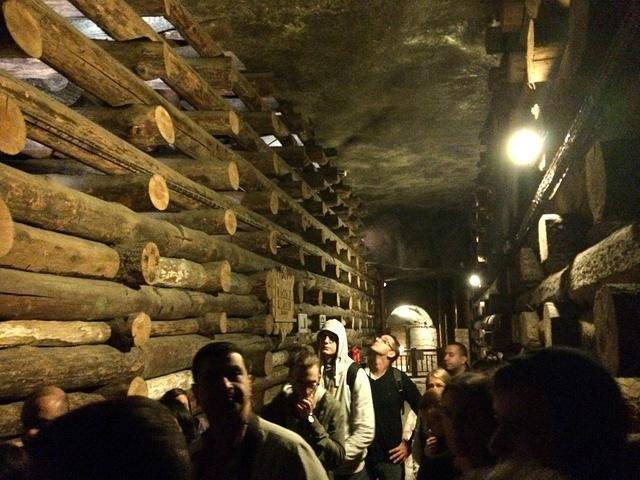 This photo shows a long mine with a railway in the middle for hauling out the salt. 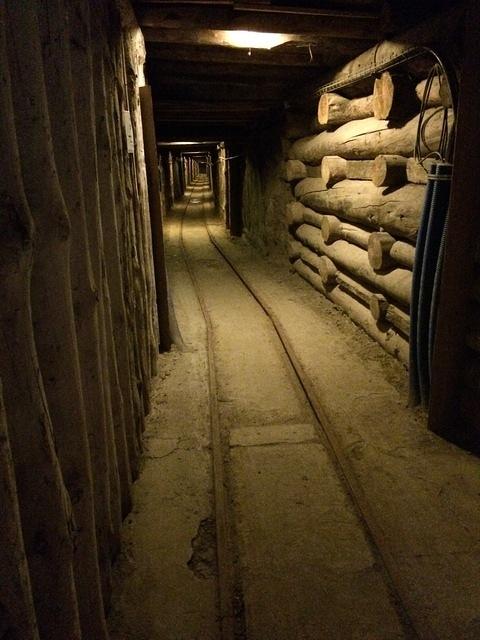 The walls and ceiling and floor of the mine are all rock salt.  The salt looks and feels like stone or marble.  It’s very hard stuff.  You can make out its crystalline structure in this photo.  The salt is far from pure when it’s mined.  It requires processing into table salt.  I don’t recall the details, though. 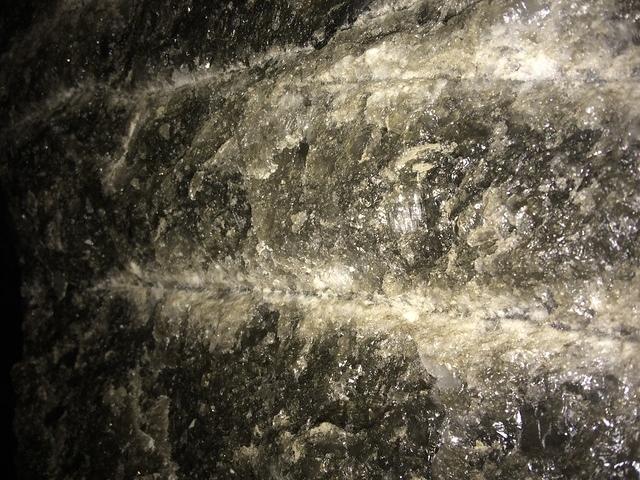 This is one of many many statues on display inside the mine that are actually carved out of rock salt.  Remember, it’s very hard … like marble. 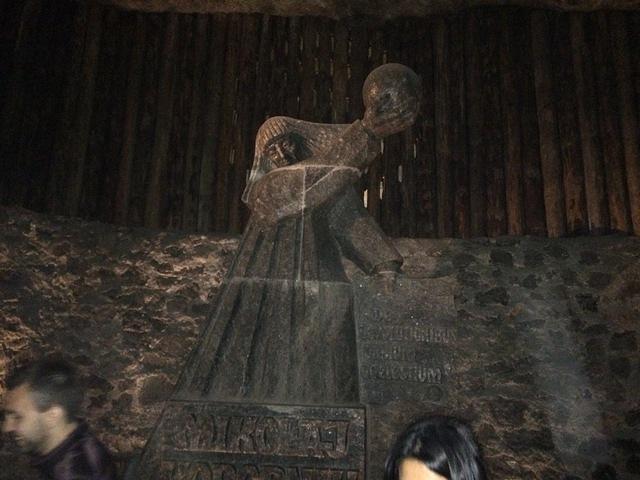 This is pretty crazy.  It’s a huge chapel.  Underground.  Carved in the rock salt.  Walls, ceiling, floor are all rock salt.  And the stairs!  People pay tens of thousands of US dollars to have weddings in here! 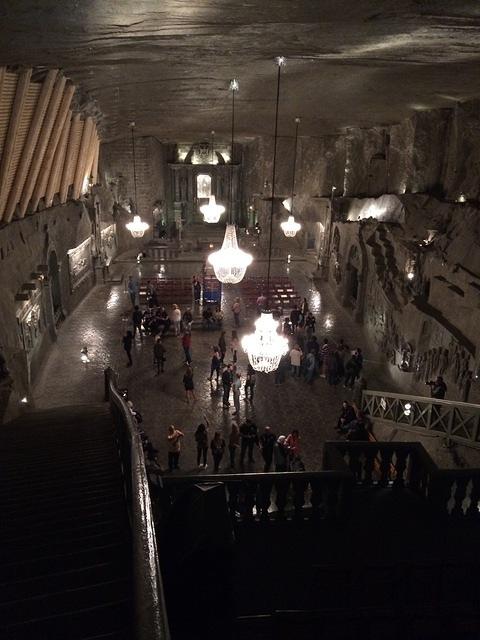 Another photo of the chapel with alter detail.  Everything is rock salt! 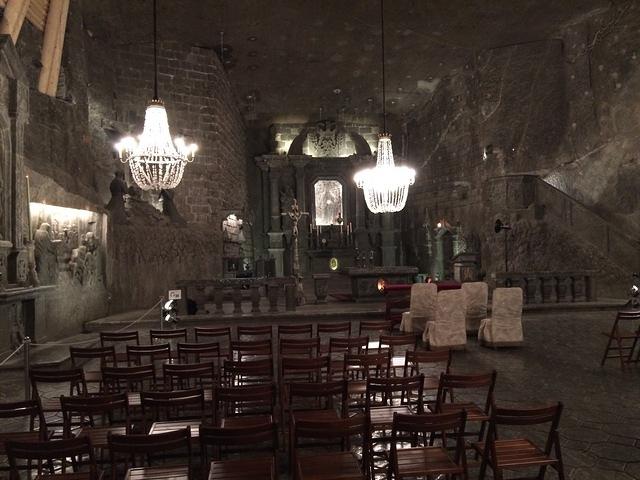 The most pure rock salt is actually clear.  Crystal clear.  So they carved these chandelier crystals out of that pure salt. 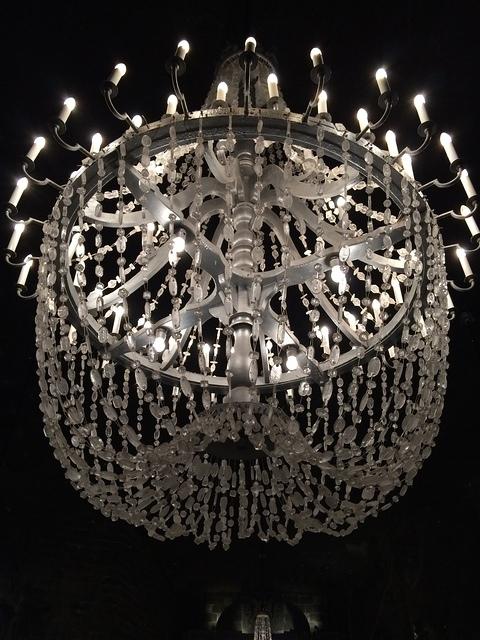 Here is a close up photo of some of the relief sculptures carved into the walls of the cathedral.  This photo was probably a couple feet high. 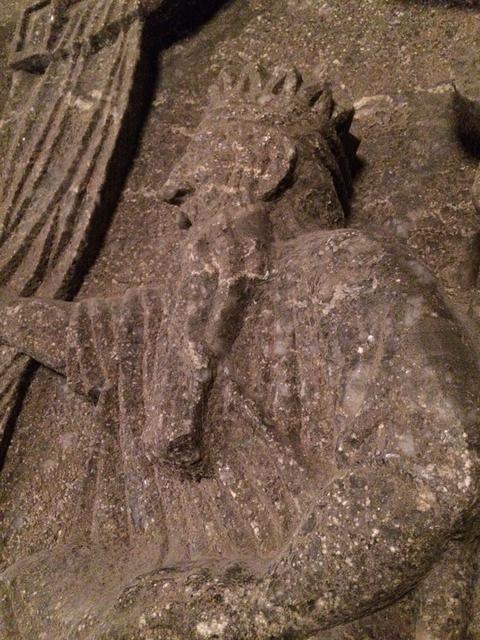 Occasional statues like this one of Mary are carved out of pure salt which is clear and looks really cool with lights inside. 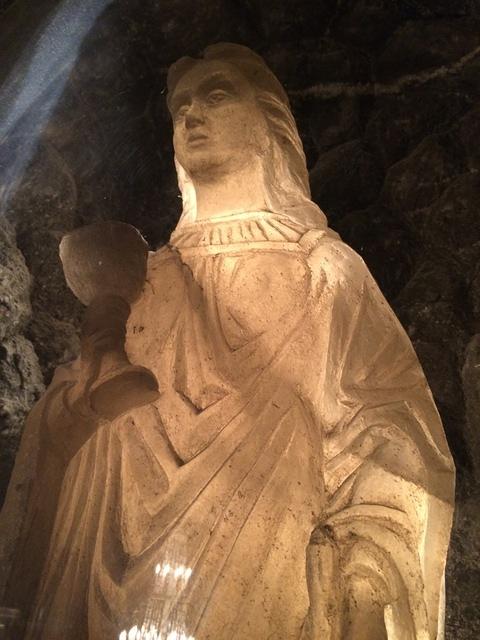 There are a few underground rivers and lakes inside the mine that are completely saturated with salt. 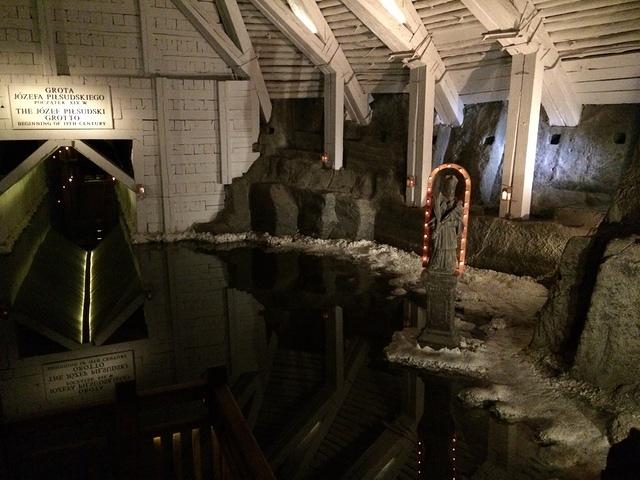 I have a lot more photos, but I wanted to try to minimize the selection and try to not overload my readers.  Tomorrow I’ll publish a blog post about all the wonderful food that I was able to experience during my short time in Krakow, Poland.

One thought on “My Trip to Krakow, Poland: The Sights”