SpaceX and Blue Origin and Boeing!

All these rocket and spacecraft companies have been in the news so much lately!  It’s difficult to understand what exactly is going on!  Who is developing what?  And why?  And when will they launch!  Who is winning this new and modern space race?  This article is my attempt to summarize and organize what I see going on in the space business right now.

Disclaimer: I may work for NASA but that does NOT make me an official spokesperson for the agency.  Everything I say here on my personal blog is either information that I found publicly on the Internet or it is my personal opinion.  There are NO government or space company secrets here!  It’s even possible that some of what I say here might actually be incorrect!

Let’s start with the rocket business!  There’s so much going on lately with rocket development that it’s a little hard to keep track!

Space Launch System, or SLS, is the big rocket that NASA is funding to send astronauts and payloads to exploration missions beyond low earth orbit.  Deep space is the phrase that NASA likes to use.  This SLS rocket is likely to send humans to Mars someday!  I just hope NASA comes up with a better name than SLS by then! 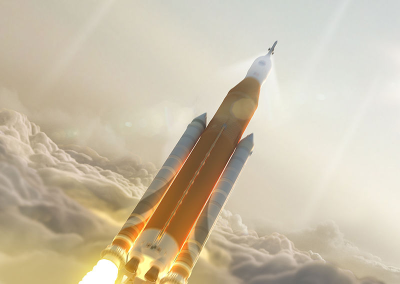 The Falcon 9 rocket is an operational rocket that was completely designed, and is currently being used, by SpaceX.  SpaceX is a company founded and run by billionaire, Elon Musk, and he is shaking up the rocket business with his unconventional ideas and methods.  He is charging customers way less than his competitors and seems to be stealing at least some business away from those other companies.

The Falcon 9 rocket design includes a first stage that can actively fly back to the launch site and land vertically under rocket power, just the same way it launched.  This reuse is expected to reduce total launch costs.  The Falcon 9 rocket has more than 30 flights under its belt, so it’s been making a big splash (that’s a bad rocket pun, by the way!) in the rocket business lately.

The Falcon 9 is currently carrying only cargo and satellites to space, but it is on track to soon be certified to carry humans. 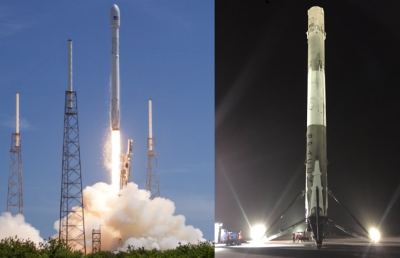 The Falcon Heavy is a big rocket that SpaceX is working on developing right now.  They are basically strapping three Falcon 9 rockets or boosters together and launching the entire stack.  It’s gonna be crazy.

The first test flight of a Falcon Heavy is scheduled for the summer of 2017, which is basically any time now.   They are working hard right now and are planning to launch very soon.  Their plan is to recover and reuse all three of the core stage rockets.  The outer two boosters will fly back and land on dry ground, while the core center booster will continue on and then fly down and land on a floating barge in the ocean.

The Falcon Heavy is planned to launch both crew and cargo into space for deep space exploration missions.

The Delta IV (4) is a heavy launcher workhorse for commercial and government customers.  This rocket comes in 5 different versions for customer flexibility and has been in operation since 2002.  Boeing makes most of the major components for this rocket, although they have combined forces with Lockheed Martin in the joint venture called United Launch Alliance (ULA).

The Delta IV is a completely expendable launch vehicle as no components were designed for reuse.

This rocket is not planned to ever be certified to carry human crews. 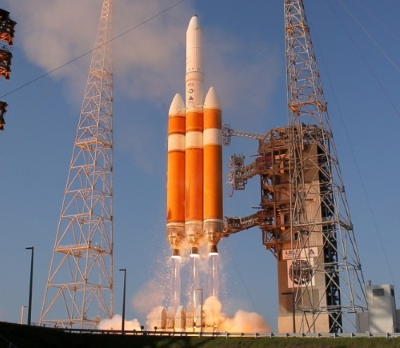 The Atlas V (5) is a medium sized launcher workhorse for commercial and government customers.  The rocket has 2 different payload diameter (fairing) sizes to choose from and anywhere from zero to 5 solid fuel boosters can be attached for additional power.  Like the Delta IV, the Atlas V also came online and first launched in 2002.  Lockheed Martin designed and created this rocket, although they have combined forces with Boeing in the joint venture called United Launch Alliance (ULA).

The Atlas V is a completely expendable launch vehicle as no components were designed for reuse.

The Atlas V is currently carrying only cargo and satellites to space, but it is on track to soon be certified to carry humans. 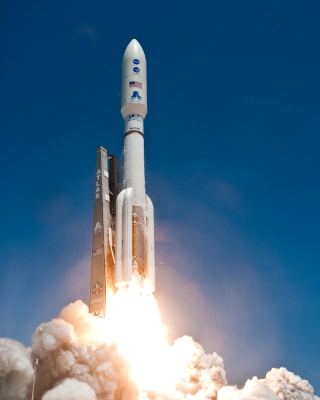 The New Shepard booster is a new rocket built by Blue Origin that is currently undergoing unmanned test flights.  It’s not a very big rocket as it is specifically designed to carry a few paying customers to the edge of space and back … a suborbital flight.

The New Shepard booster is designed to fly back to the launch pad and land vertically under rocket power and to be launched again, similar to SpaceX’s Falcon 9.

Blue Origin is owned by Amazon.com founder and billionaire, Jeff Bezos.  In 2017, Blue Origin began construction of a rocket factory right outside the gates of NASA’s Kennedy Space Center, becoming the first rocket company to build their rockets directly at the launch site. 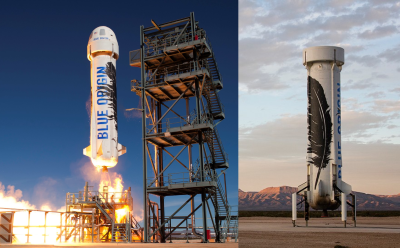 ULA is working on a new large rocket called the Vulcan which is intended to replace both the Delta IV and the Atlas V.  It is planned to start test flights in 2019, although construction has not yet begun.

Blue Origin is planning a medium sized orbital rocket they are calling New Glenn.  It is planned to start test flights in 2020, although construction has not yet begun.

SpaceX has announced plans to eventually develop a super-heavy-lift rocket they are calling the Interplanetary Transport System, or ITS.  They were previously calling it the BFR, which stood for Big Freaking Rocket.  That’s the rated-G version of the name, anyways!  The first stage of ITS is planned to be powered by 42 engines!  It’s advertised to be able to haul more than twice the payload capacity of NASA’s SLS rocket to low earth orbit.  Elon’s plans for this huge rocket are basically Mars Colonization and he expects to be operational sometime in the 2020’s, although it’s too early to really give a date.

Now let’s talk about the spacecraft business!  This is also a very busy season right now and it’s easy to get lost in it all!

The Cargo Dragon capsule is an operational spacecraft that was completely designed, and is currently being used, by SpaceX.  It is being used to ferry cargo to the International Space Station (ISS).   The Cargo Dragon is currently launched into space on top of the SpaceX Falcon 9 rocket, but could also be launched on top of the future Falcon Heavy rocket.   It is not certified to carry humans into space.

During its first 5 years of ISS operations, the Cargo Dragon has successfully flown to the space station 11 times, with lots more flights on the schedule.

The Orion capsule is also called the Multi-Purpose Crew Vehicle, or MCPV.  NASA loves their acronyms!  Orion is a NASA funded space capsule designed to take 4 astronauts out of low earth orbit into deep space missions.  Possibly to the moon.  Possibly even to Mars someday.  The Orion capsule is being developed by Lockheed Martin for NASA. 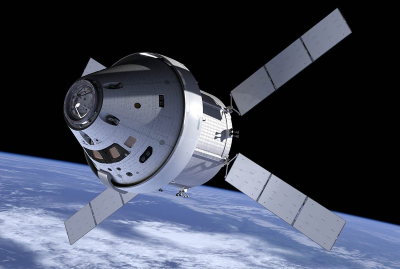 The Crew Dragon capsule, otherwise known as the Dragon 2 or Dragon V2 is designed and built by SpaceX and is planned to take 7 astronauts to the space station and return them home safely.

The Crew Dragon capsule is planned to launch on top of either the Falcon 9 or the Falcon Heavy rockets.  Upon returning to earth, the Crew Dragon capsule is expected to land vertically on dry ground under rocket power.  It is designed to be reusable.  This will be the first time that this type of capsule soft landing system has been attempted but it is expected to reduce both turnaround time and refurbishment costs. 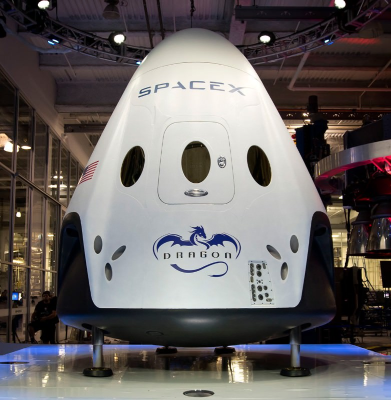 The Starliner capsule is designed to return to earth under parachute control but will also have an airbag system that deploys to cushion the landing and allow it to land on dry ground rather than in the ocean which is expected to shorten turnaround time and reduce refurbishment costs.  It is designed to be reusable.  The first unmanned test flight is scheduled for 2018 and the first manned flight is also scheduled for that same year.

The New Shepard Crew Capsule is being designed and built by Blue Origin for the purpose of space tourism.  It will be capable of carrying 6 tourists to the edge of space and back.  The capsule will launch on top of the New Shepard booster in a 10 minute long suborbital or ballistic flight pattern.  It is designed to be reusable.

Blue Origin claims that there is no ground control and that all control is automated and onboard.  The capsule returns to earth under parachute control and lands on dry ground near the launch site. 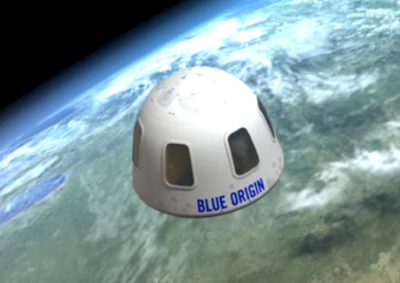 I can’t seem to find any references online that say when the Dream Chaser is planned to start test flights or operational flights.

Okay.  As much as I tried to summarize and simplify things, that was still quite a bit of information to digest.  So here are a couple of short summary tables that I threw together that should help put everything into perspective at a glance: 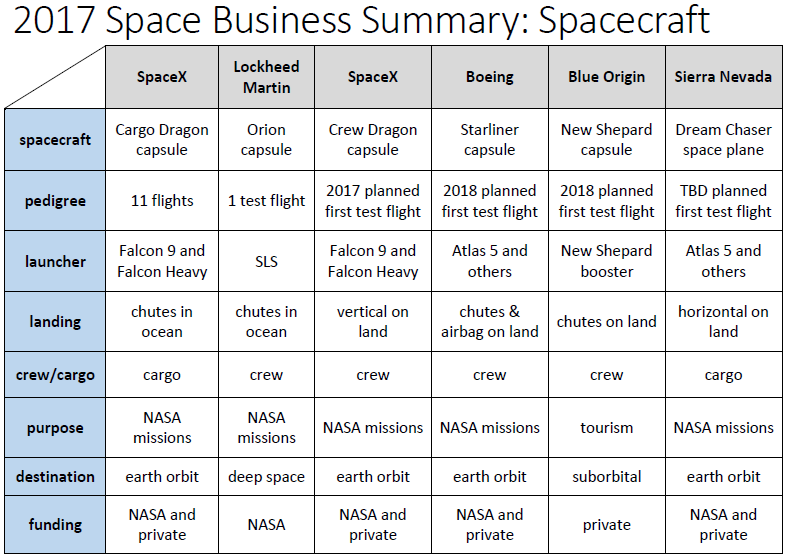 Okay, that should do it.  You are now armed with enough information to talk to your friends and family intelligently about what is going on in the space business right now!  Congrats!  Now go forth and distribute this new-found knowledge in any way that you find useful!

But remember that things change pretty quickly these days, so check back later for updates!  And if you see anything wrong in my article, please let me know!  I welcome all corrections and comments!

Disclaimer: I may work for NASA but that does NOT make me an official spokesperson for the agency.  Everything I say here on my personal blog is either information that I found publicly on the Internet or it is my personal opinion.  There are NO government or space company secrets here!  It’s even possible that some of what I say here might actually be incorrect!