Flying long distances is never all that fun.  Our trip to Malmo Sweden took us to Reykjavik Iceland on the first leg, and then to Copenhagen Denmark on the last leg.  Iceland seems like a strange stopover location, but we flew on IcelandAir, so that’s their hub. 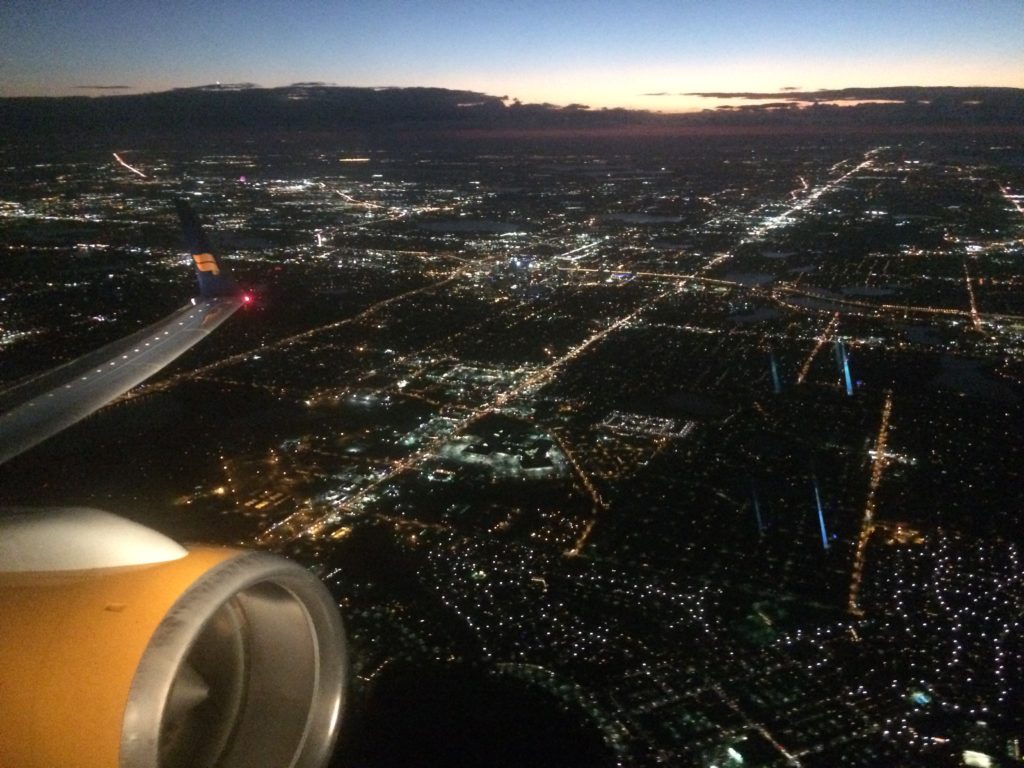 The photo above is Orlando at sunset right after we took off on our trip.  It was an overnight flight, which means that everyone is supposed to sleep during the flight.  Easier said than done for some people.

We were dead tired when we landed in Iceland.  Our layover was supposed to be an hour and a half.  But even before our plane left Orlando, we were told that our Iceland to Denmark flight was delayed several hours.  When we got to Iceland we were told that storms the previous day caused a backup of an entire’s day worth of flights and so our flight would get delayed 8 or 9 hours.

Here is what the radar looked like an hour after we landed in Reykjavik Iceland.  The storm from the previous day was still on the radar moving to the east. 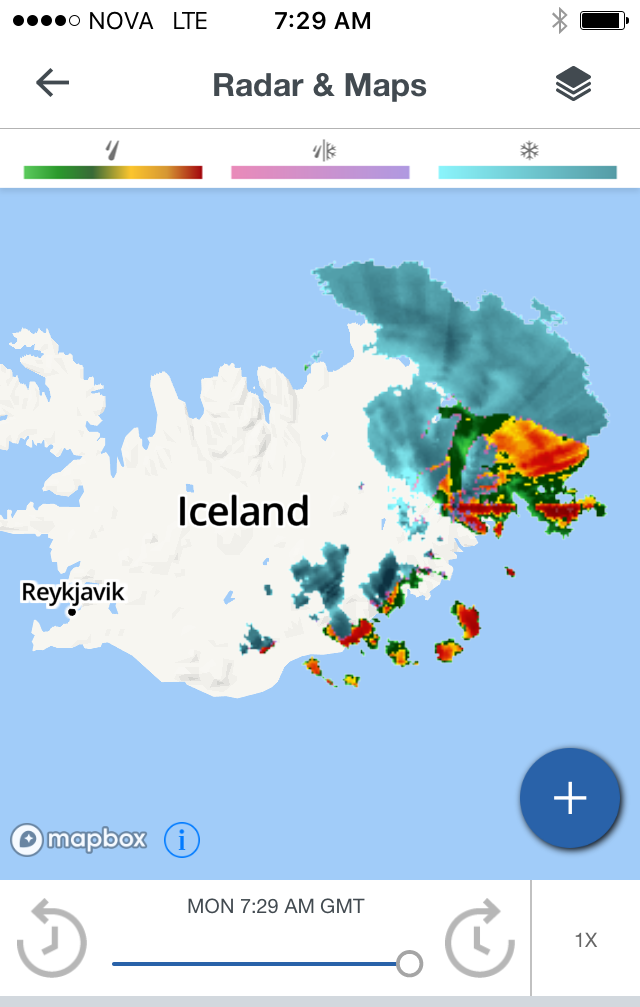 We inquired about what there was to do in Reykjavik Iceland, and the only activity that was presented to us was a popular local hot spring called Blue Lagoon.  It looks pretty neat and really beautiful, but we didn’t really feel like doing a hot spring with all our luggage and without swim suits.

So after taking long naps on chairs in a quiet corner of the Iceland airport, we made ourselves comfortable for the day.  We found some nice lounge chairs that we could stretch out in and chill.  I watched a movie on my iPhone. 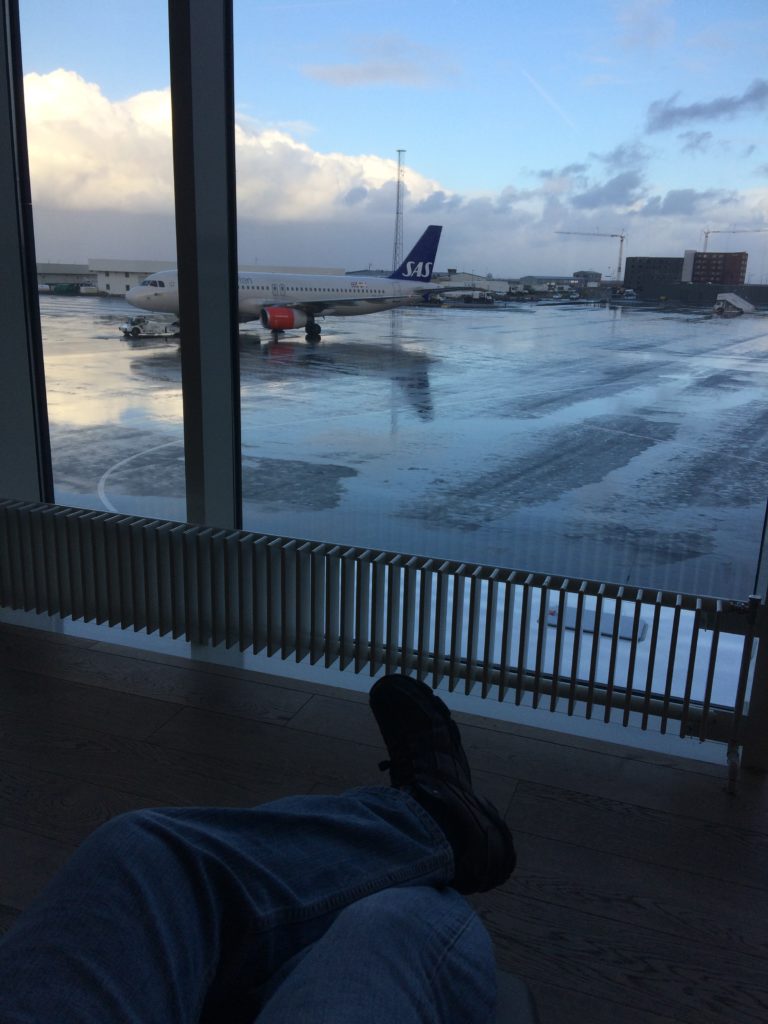 And my wife did some “teacher homework”.  Grading papers or filling out teacher paperwork or something of that nature. 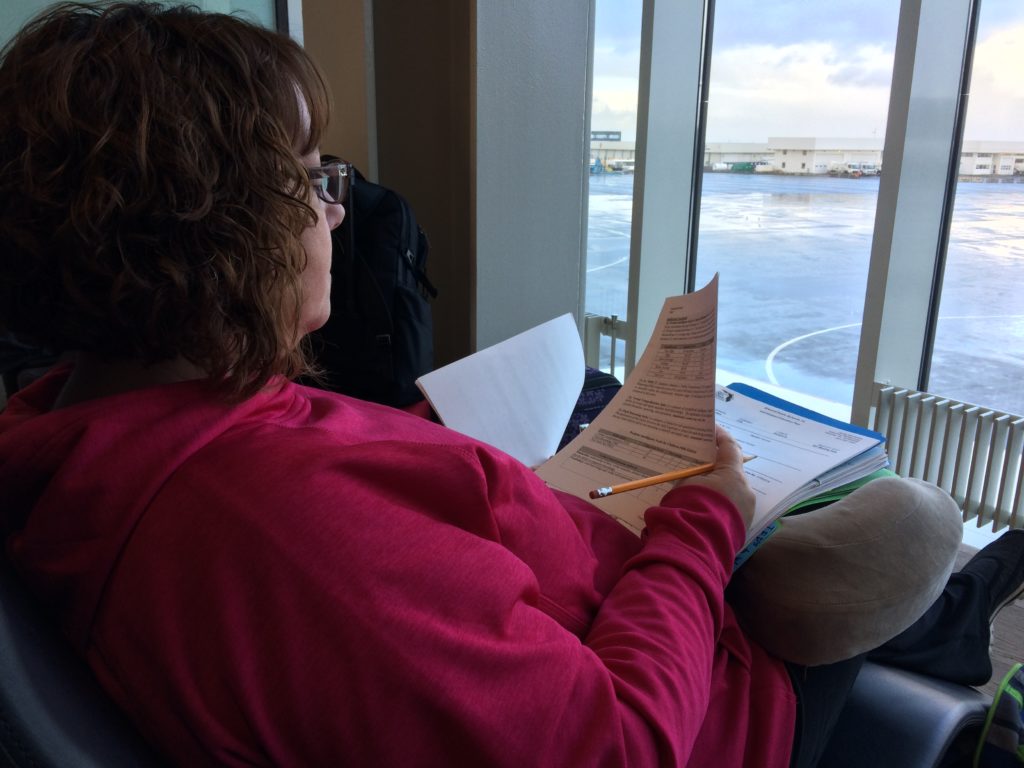 Eventually we got on a plane for Copenhagen Denmark and arrived there close to 10pm local time rather than our planned noon arrival time.

In Denmark they speak Danish and in Sweden they speak Swedish.  And I know nothing about either of these languages.  Luckily, most locals also speak fluent English.  Once they realize that you’re not from around there.  And luckily most signage that we encountered had English subtitles.

But there were a few times that I needed a quick real-time translator.  Google Translate mobile app to the rescue!  It’s an awesome app!  It uses augmented reality to show you the translated text over the top of the actual text using your phone’s live camera feed.

Here is a photo of a sign in Danish that was on the wall in the Copenhagen airport. 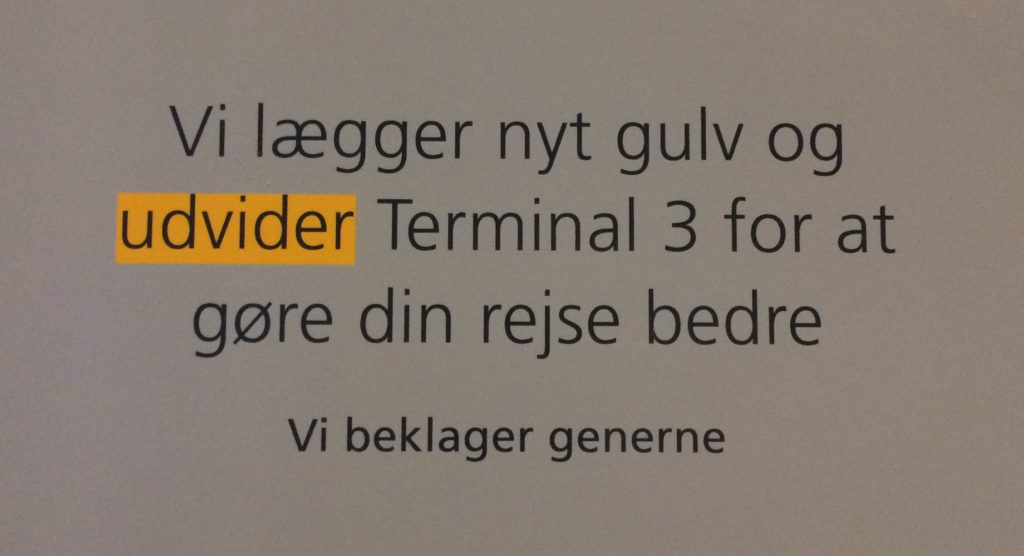 And here is a screen grab of what that sign looked like in the Google Translate mobile app.  It overlays the translated text over the original text in a similar font and color in order to replace the text in real time within your live camera feed.  It’s really cool.  Not perfect, but super cool! 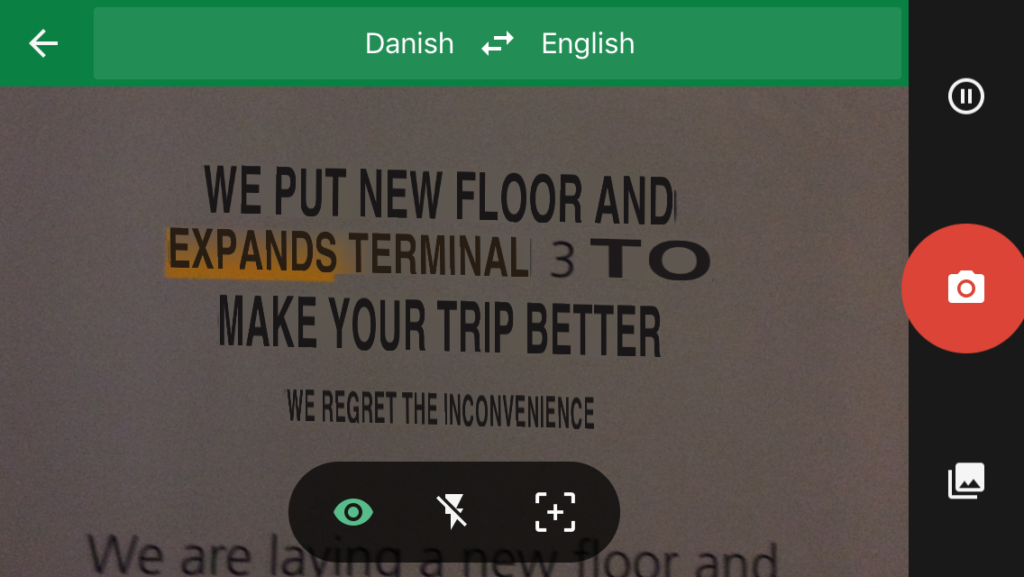 To get from Copenhagen Airport to Malmo Sweden, we had to buy a train ticket inside the airport and then wait for the train.   The signs were a little confusing because we needed to go to the Malmo Central train station, but the trains mostly showed their final destination.  So we nearly missed our train because Malmo was in very small print on the sign.  We noticed it just in time, though.  Thankfully.  It was cold waiting for the train, and I didn’t want to sit there for another 20 minutes waiting for the next train!

The train from Copenhagen to Malmo goes both over and under the strait thanks to the awesome Øresund Bridge.  It’s a pretty awesome trip, although we couldn’t see anything when we arrived since it was quite late in the evening.

It was midnight before we actually got settled into our hotel.  Our hotel (Comfort Hotel) in Malmo Sweden was an interesting combination of classic 19th-century architecture and modern and trendy decor.  It was decorated with a rock and roll vibe.  Check out the stacks of amplifiers and speakers in the lobby!  (This photo was NOT taken at midnight when we arrived after our long trip to Malmo!) 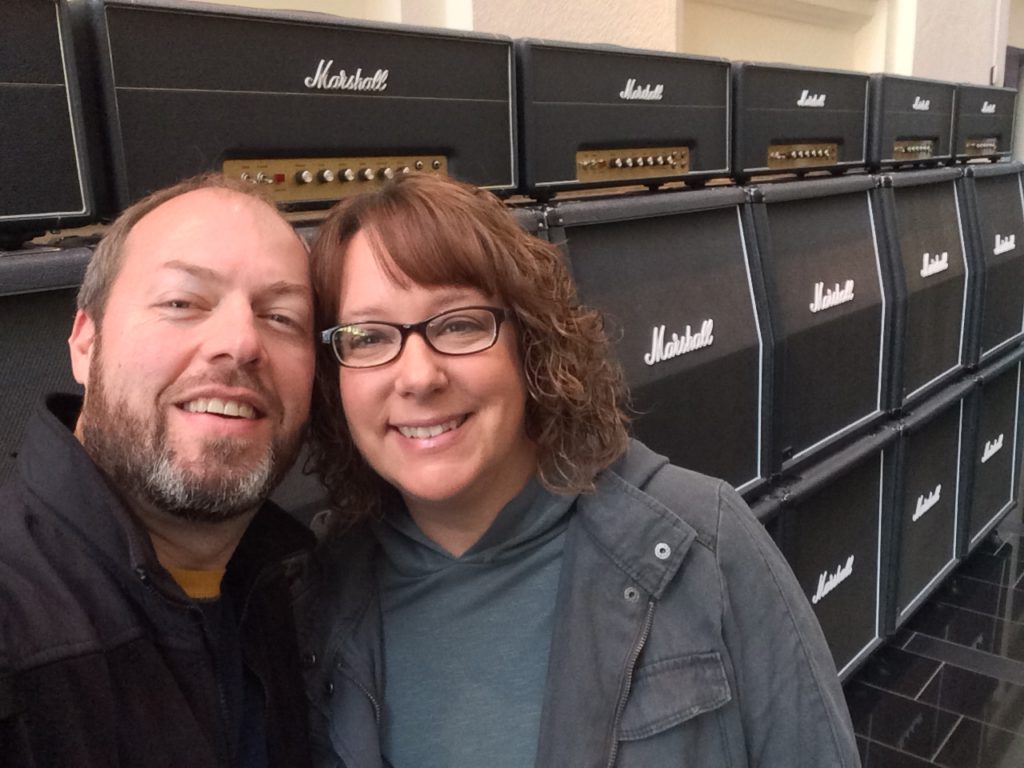 I didn’t get a picture of it, but our room had a giant mural of lips singing into a giant microphone.  It covered one entire wall!  Very rock and roll!

Although I didn’t end up using it during our stay, the gym in the hotel was pretty awesome! 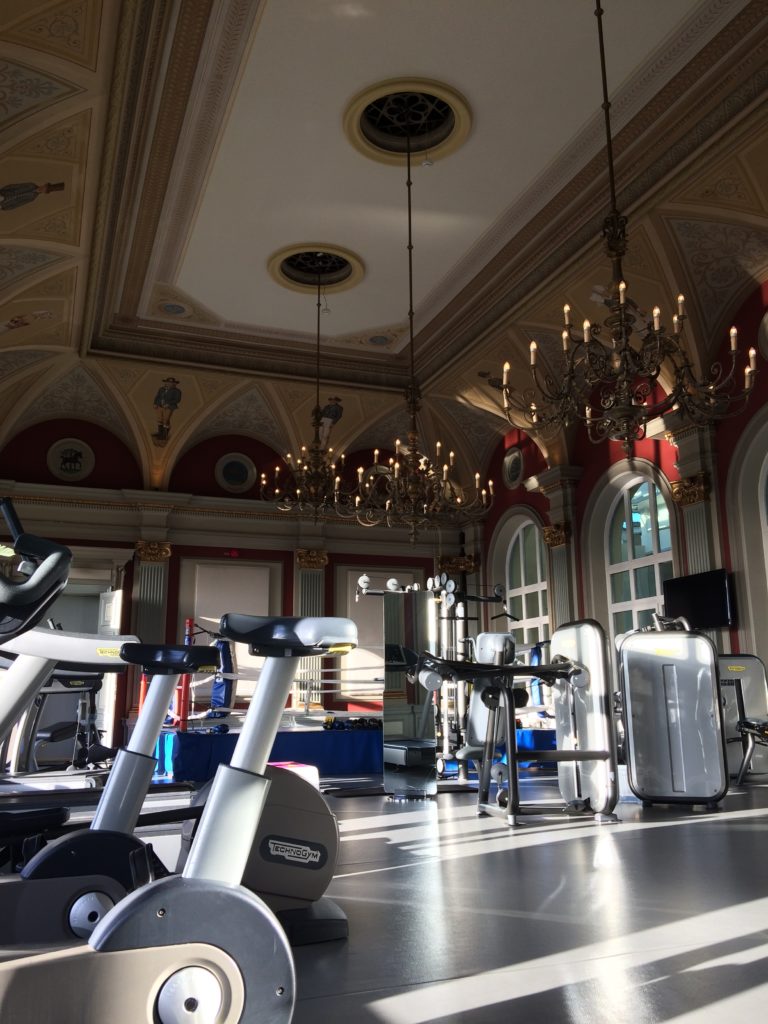 The equipment all looked brand new and the gym even had a boxing ring! 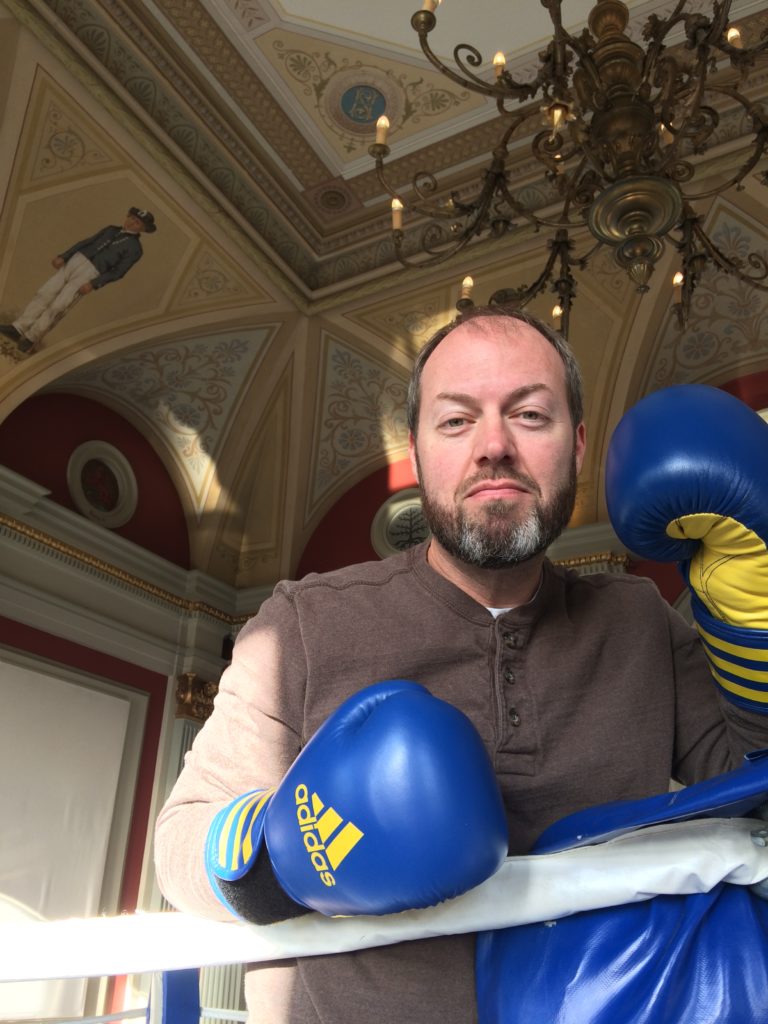 Our flights back home at the end of our stay were fairly uneventful.  This is a photo of Copenhagen Denmark right after we took off. 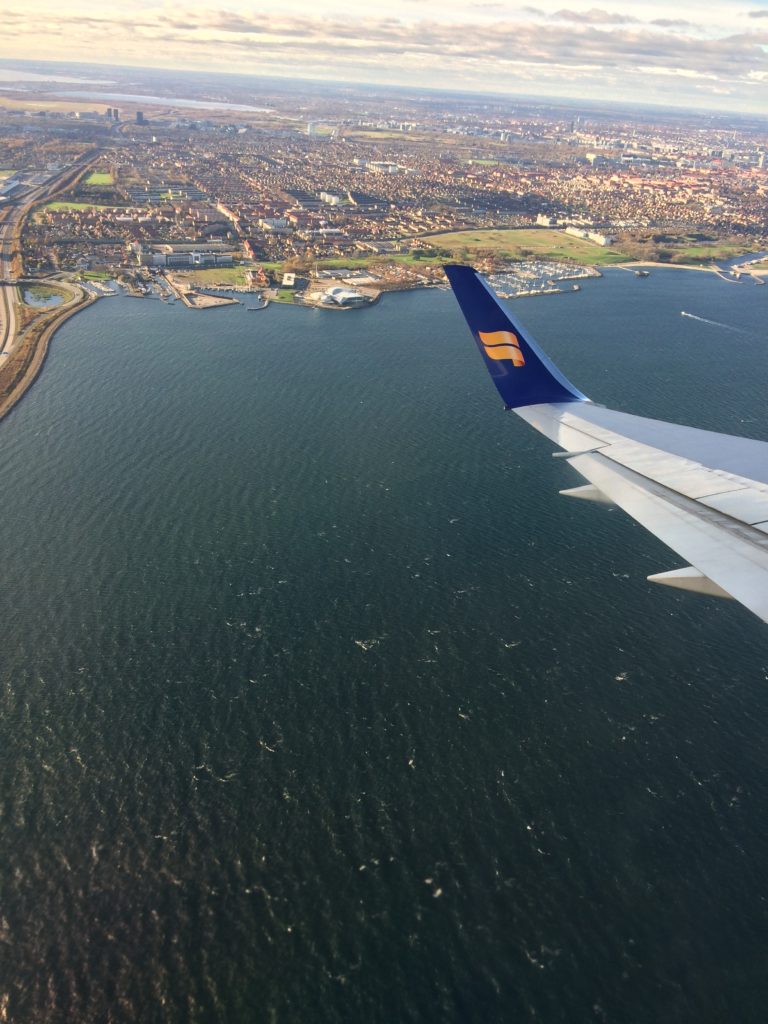 And this photo is also of Copenhagen a couple minutes later. 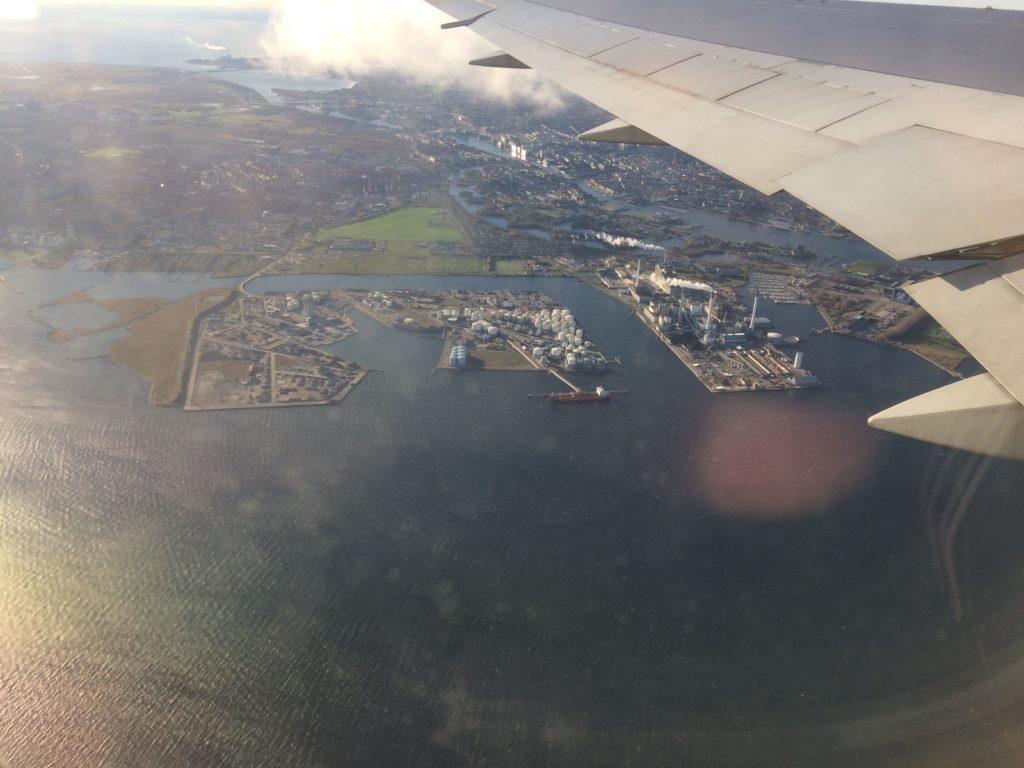 One thing that I did note on the flight back.  When we took off from Iceland on our second and final leg, the sun was just going down.  And since we were flying west for about the first half of that flight, it actually took about 3 or 4 hours for the sun to actually go down!  Pretty cool!