A couple weeks ago after speaking at a software developer conference in Berlin Germany, I had the opportunity to take several personal days while there and I got to see some of the countryside!  It was pretty great!

I rented a car and then drove south out of Berlin.  Sort of towards Munich but only about half that far.  My destination was a tiny little village called Zaulsdorf that is tucked into a tiny little valley of beautiful rolling hillsides.  This is where my grandfather, Kurt William Leucht, was born and where he lived till about the age of 4.  I grew up in a very rural area of Central Illinois, so seeing rural Germany was really fun for me.

Here’s a photo that I took of Zaulsdorf from above.

It’s a very small farming community.  There are probably only 20 houses in total.  Zaulsdorf reminds me of the small unincorporated community of Allentown, Illinois that I grew up in.

The beautiful yellow flowering fields seen in this photo are very common in Germany and are growing rapeseed which is the 3rd largest source of vegetable oil in the world.

Zaulsdorf is just a couple miles off the nearest highway but is only accessible via a one lane road that is both steep and winding. 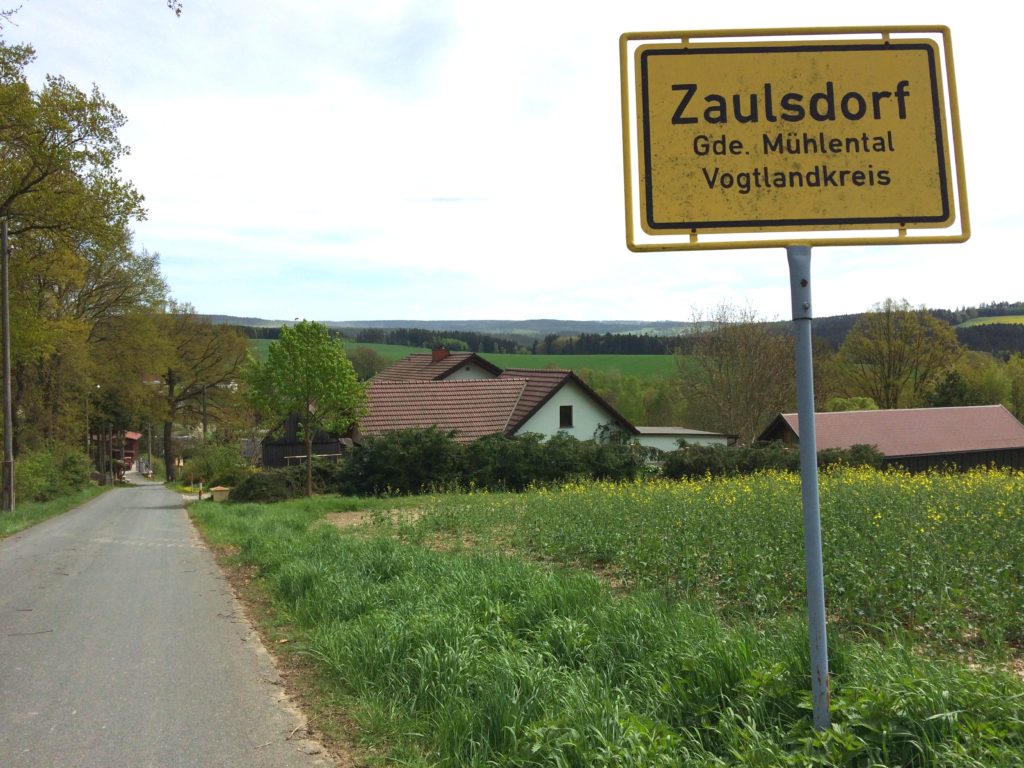 This photo shows the large rural land plots within the village and also some of the farmland on the hills in the distance.

There are only a couple of small one lane roads in Zaulsdorf.  I parked my rental car along the playground near the center of the village and walked around for a bit. 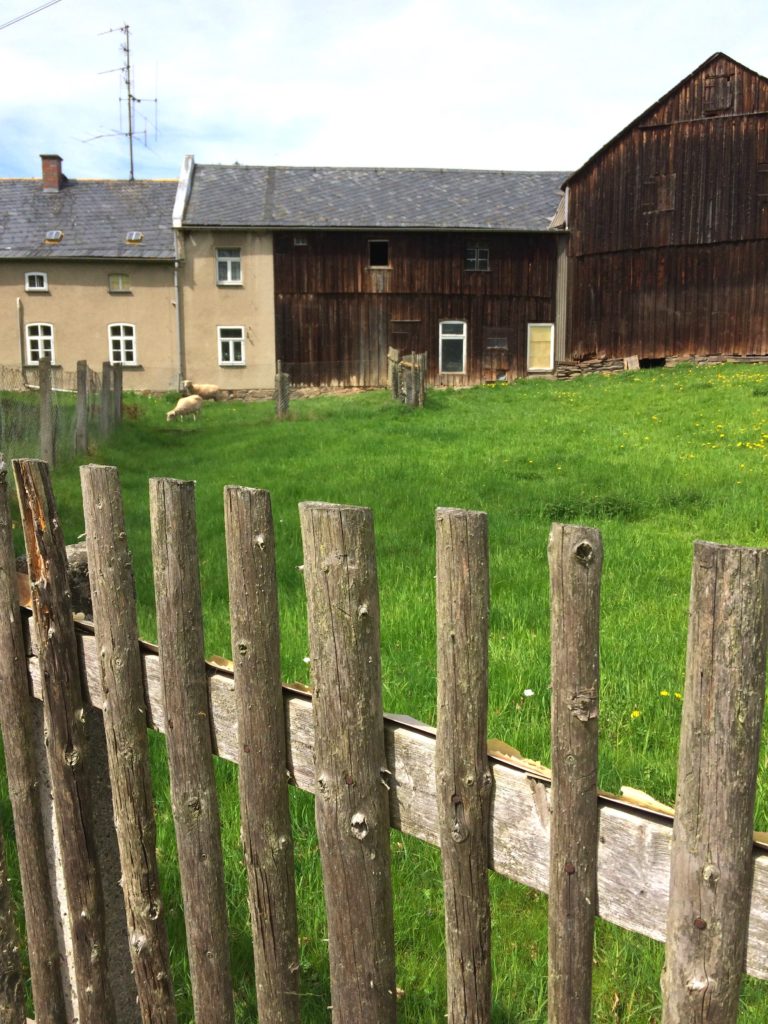 I was mainly looking for old structures and old houses that were likely in place back in 1900 when my grandfather was a pre-school child there in the village.  Like this old house. 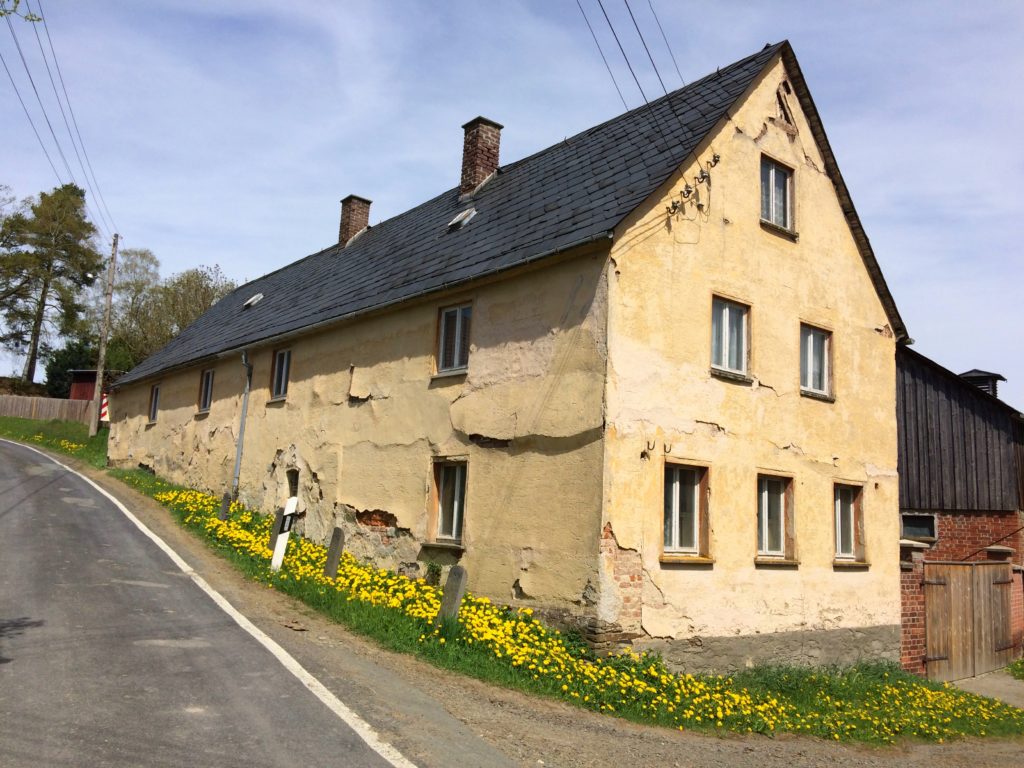 This old barn was probably also there in 1900.  Look at that architecture!  They don’t make ’em like this anymore!  It’s a real work of art! 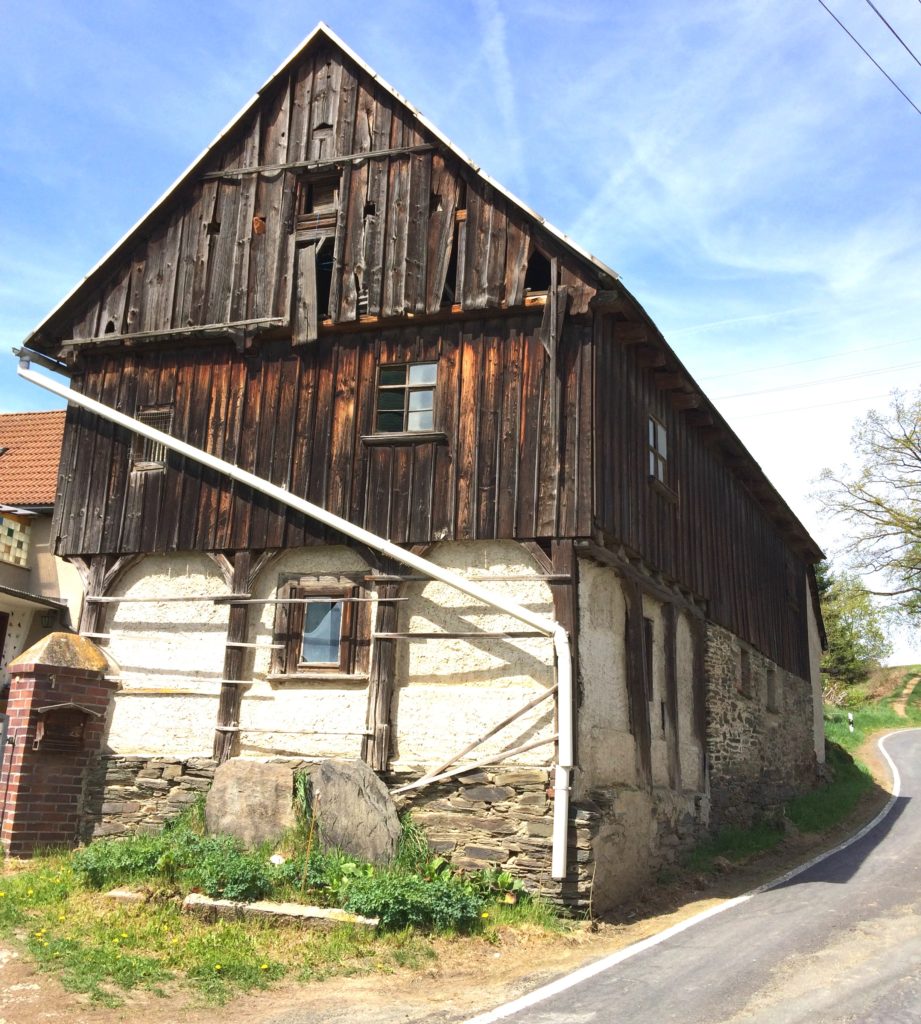 Here’s a close up view of the slate stone wall foundation.  Amazing. 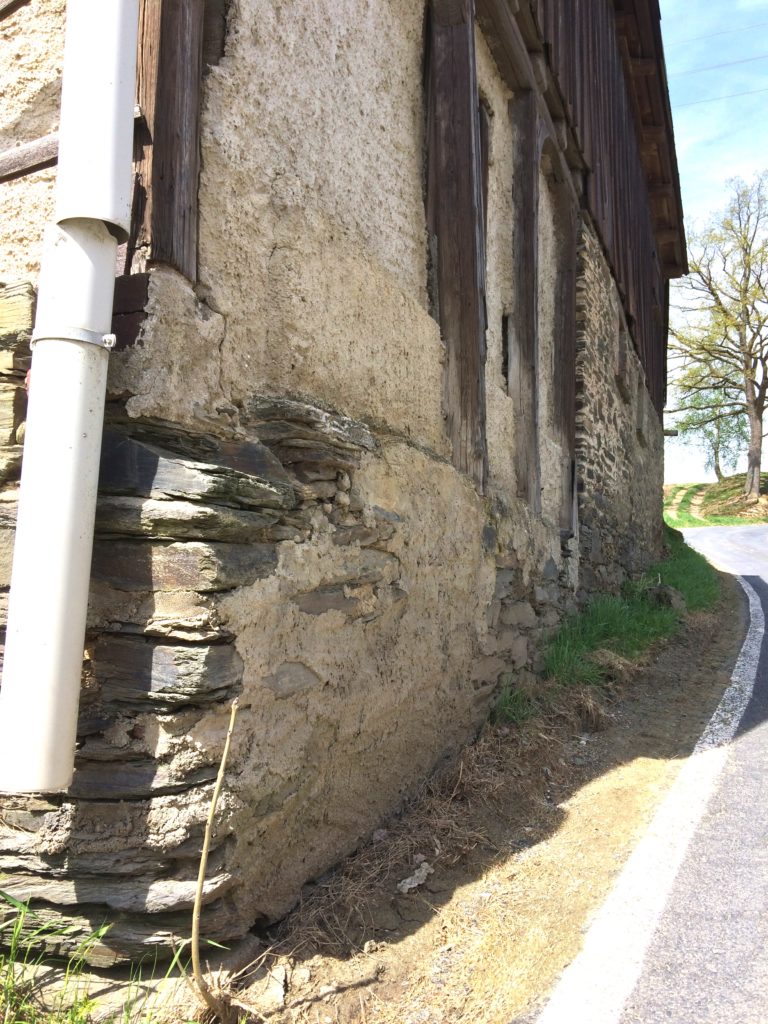 This little stream was at the bottom of the valley, in a park or playground.  While looking at this stream it was easy to imagine my 4 year old grandfather playing in it back in 1900.  At least I know I would have played in it as a 4 year old! 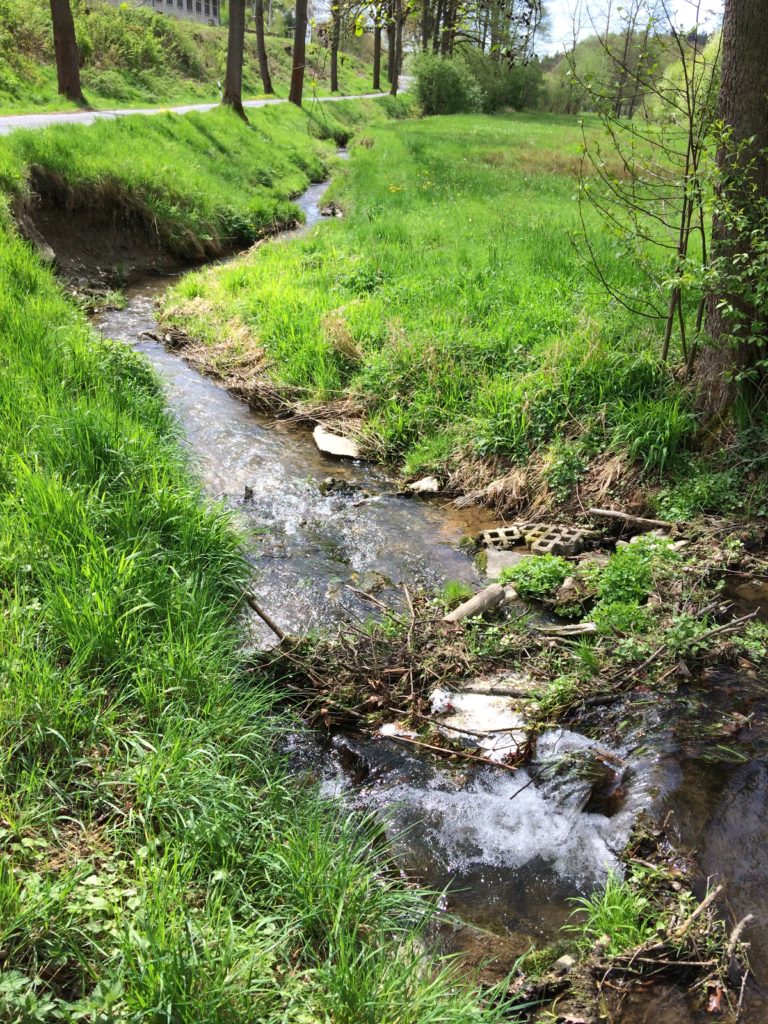 This photo shows some of the properties and houses from the bottom of the valley looking up.  Some of the houses were cute little cottages, while some were larger modern looking structures. 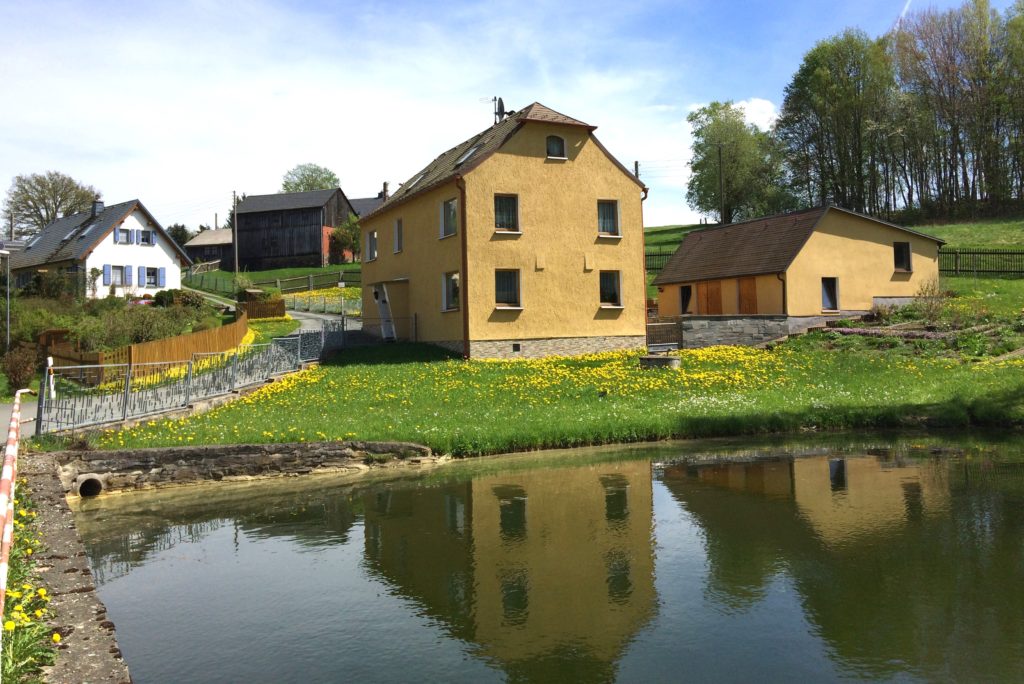 This old barn has an old slate rock roof.  It’s beautiful.  These types of roofs can last for 200 years!

For many generations in Zaulsdorf, my grandfather’s family owned the village mill, which was a central focus of Zaulsdorf.  In 1902, they sold the mill to the Halbauer family.  The mill was a working centerpiece of Zaulsdorf until about 1986, when it was shut down and the mill building was turned into apartments or a duplex of sorts.

The white building in this photo is the old Zaulsdorf mill. 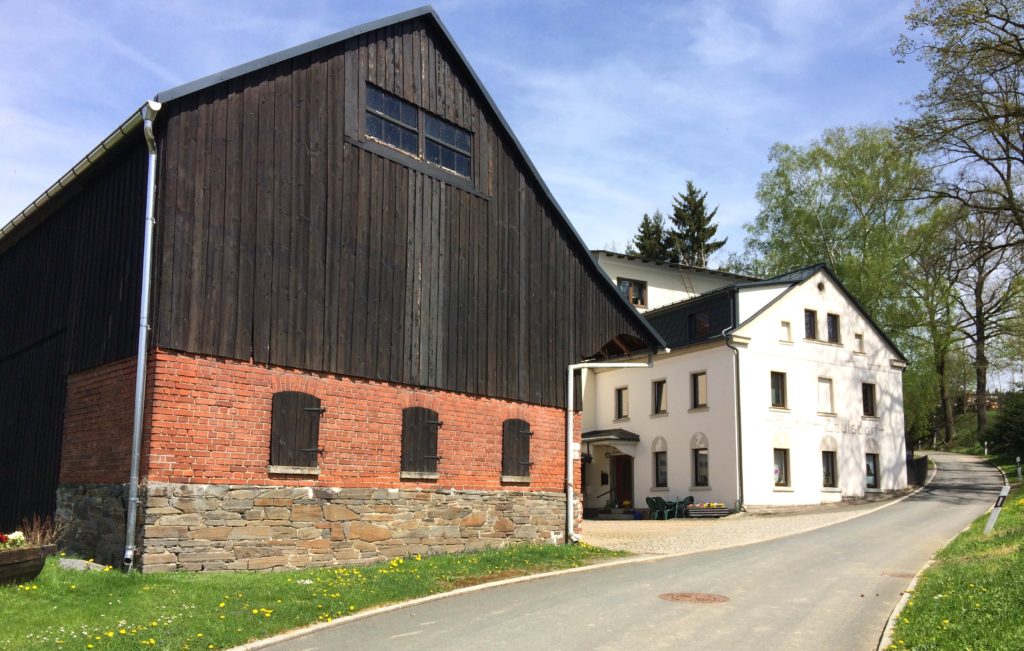 The old Zaulsdorf mill used water from a brook or stream on top of the hill which was guided in a pipeline to the mill. Inside the mill building, the water flowed through a turbine and then exited the building into the brook again.  So the entire mill drive ran inside the building and wasn’t visible from the outside at all.

Inside the mill, people ground grain into flour. There used to be a lot of mills like this in Germany because the farmers had only small pieces of land and couldn’t easily transport their grain across long distances.  But they are becoming more and more rare.

Here is a closer photo of the mill.  It was mid-morning on a weekday when I was there exploring the village.  Part of me wanted to walk up and knock on all the doors and ask if I could explore inside the old mill building.  But I don’t speak German at all.  And it looked like nobody was home anyways.  So I chickened out. 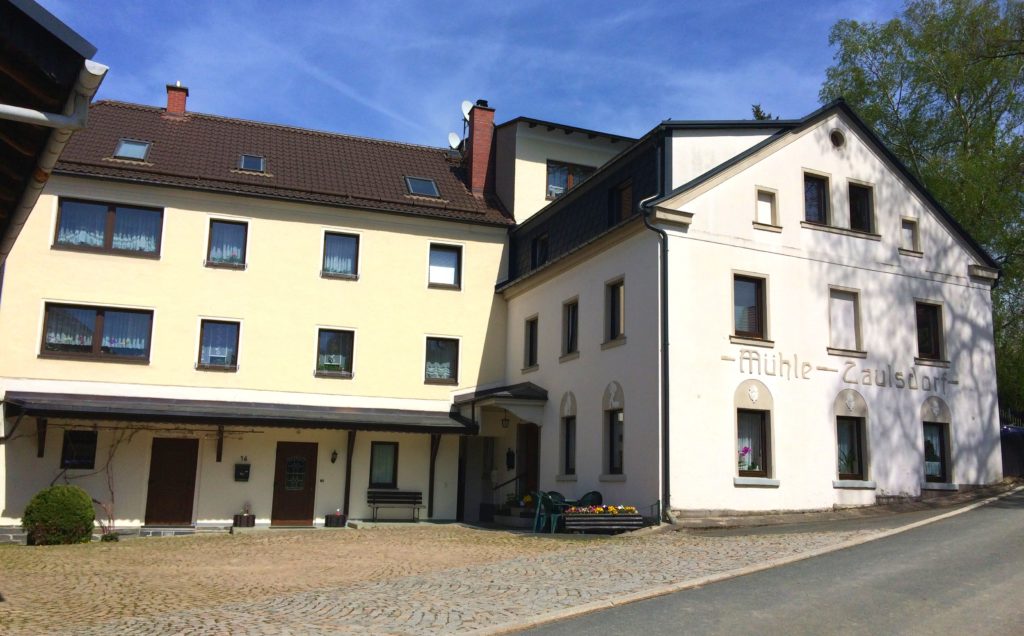 This large old barn next to the mill building looks like a fun place for a 4 year old to play in 1900.  I think it would be cool to explore inside today, just to see what my grandfather experienced back in 1900.  But it didn’t seem like anyone was around.  So I just imagined what it’s like inside.

What are the odds that there is something of my grandfather’s actually up in the attic of this old mill barn right now?  Like an old toy or an old book?  With his name scratched on it or written in it?  Wouldn’t that be cool to find! 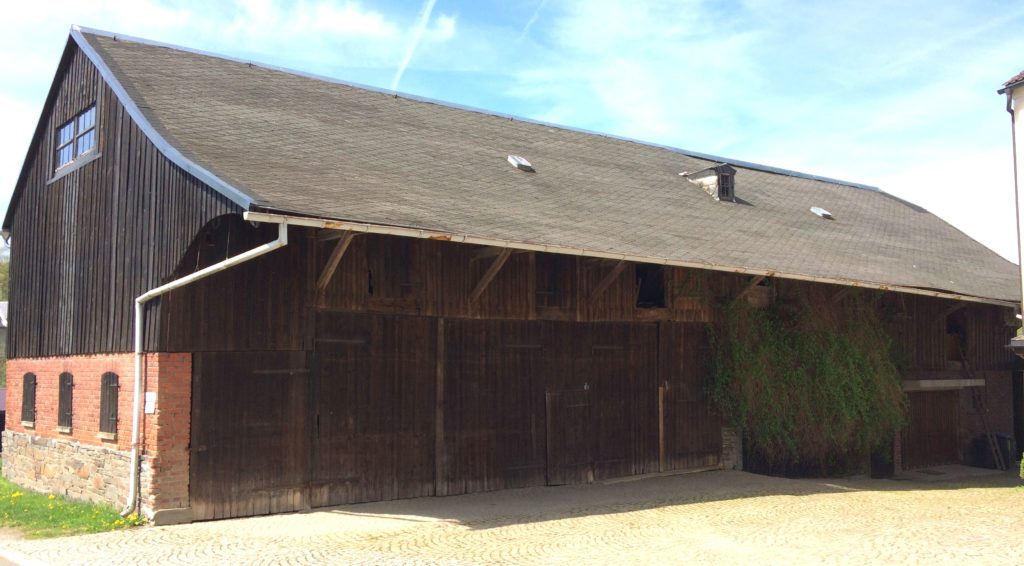 Here is a close up of the old barn next to the mill building.  The sign says “at the mill”.  I’m assuming this barn was part of the mill property based on its location and also based on that sign. 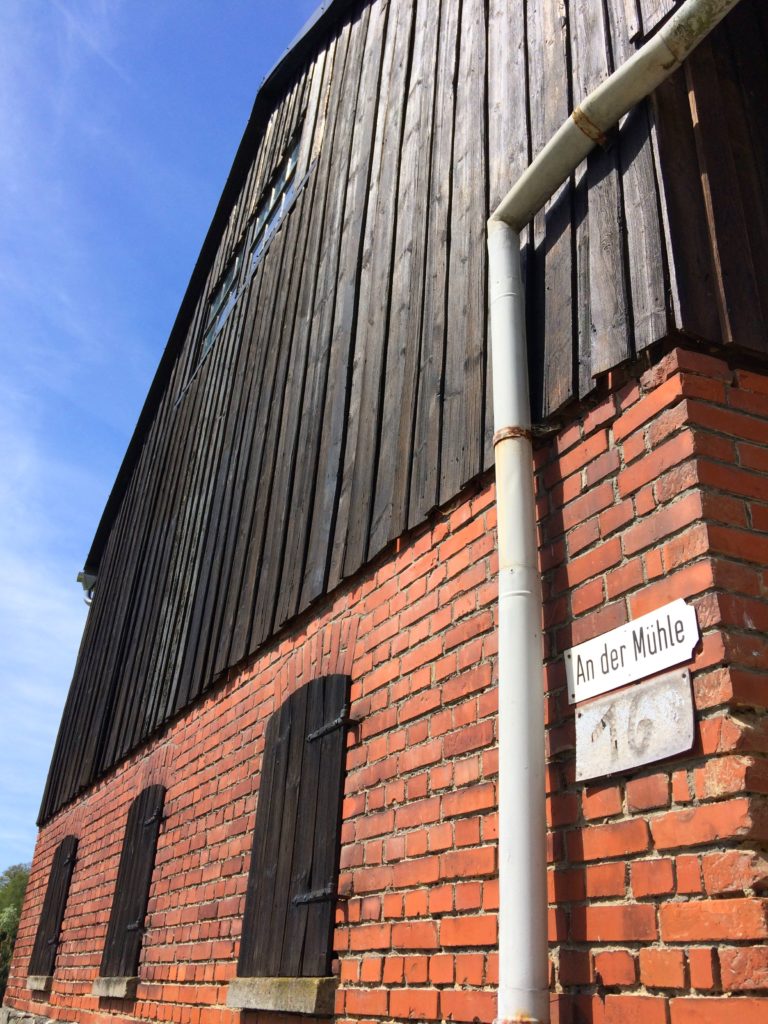 I almost missed it, but in the small park or playground in the middle of the village was this memorial from World War I.  It’s about chest high and it’s towards the back of the property. 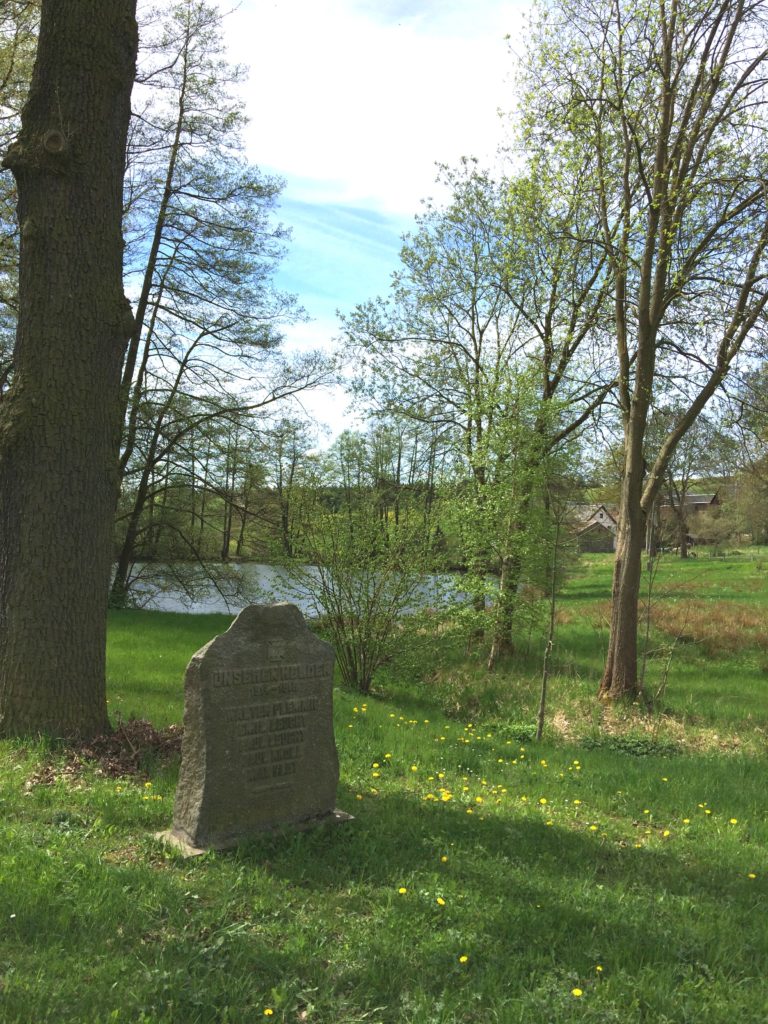 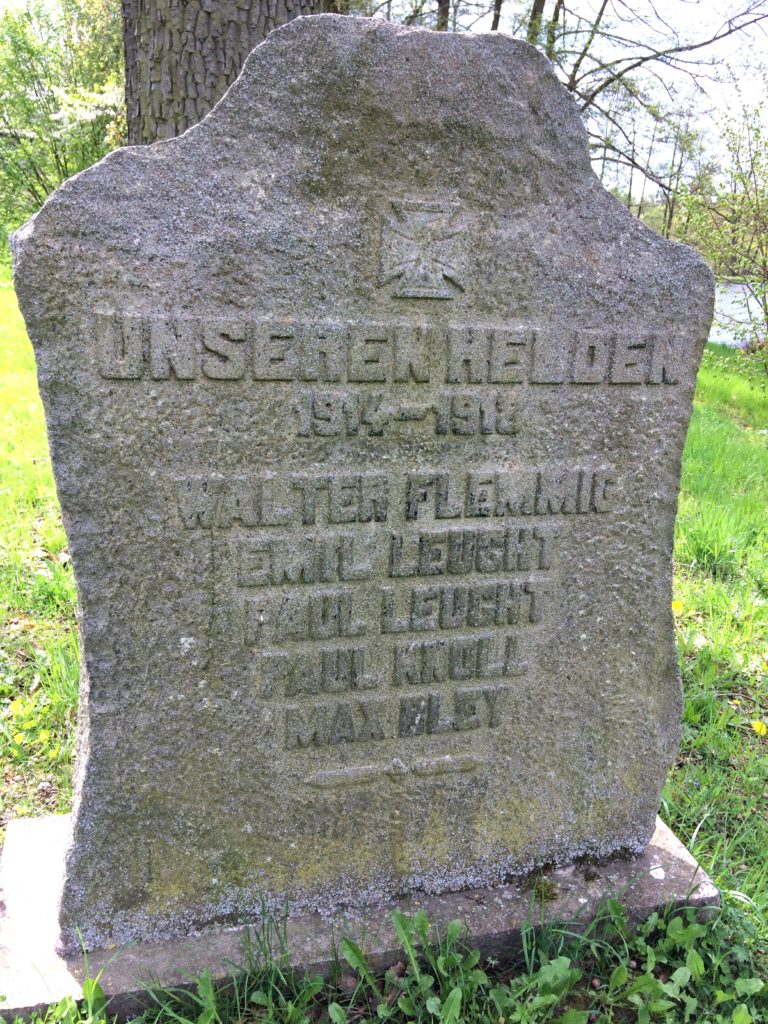 So who are these two Leucht guys who were from Zaulsdorf and died in WWI?  I’m not sure.  My immediate relatives moved out of Zaulsdorf in 1900, but maybe there were other Leucht families living there.  Leucht was a fairly common name in the area.

I popped into Leipzig quickly, which was about midway on my trip to Zaulsdorf.  The reason I wanted to get a look at Leipzig was that my grandfather stopped there when he was 18 years old and travelling to the northern coast of Germany for his overseas trip to America.  He wrote in his journal that he had a couple hour train layover in Leipzig and that he saw the Battle of the Nations Monument.

First I explored this big cemetery that was right next to the Battle of the Nations Monument.  It was pretty cool. 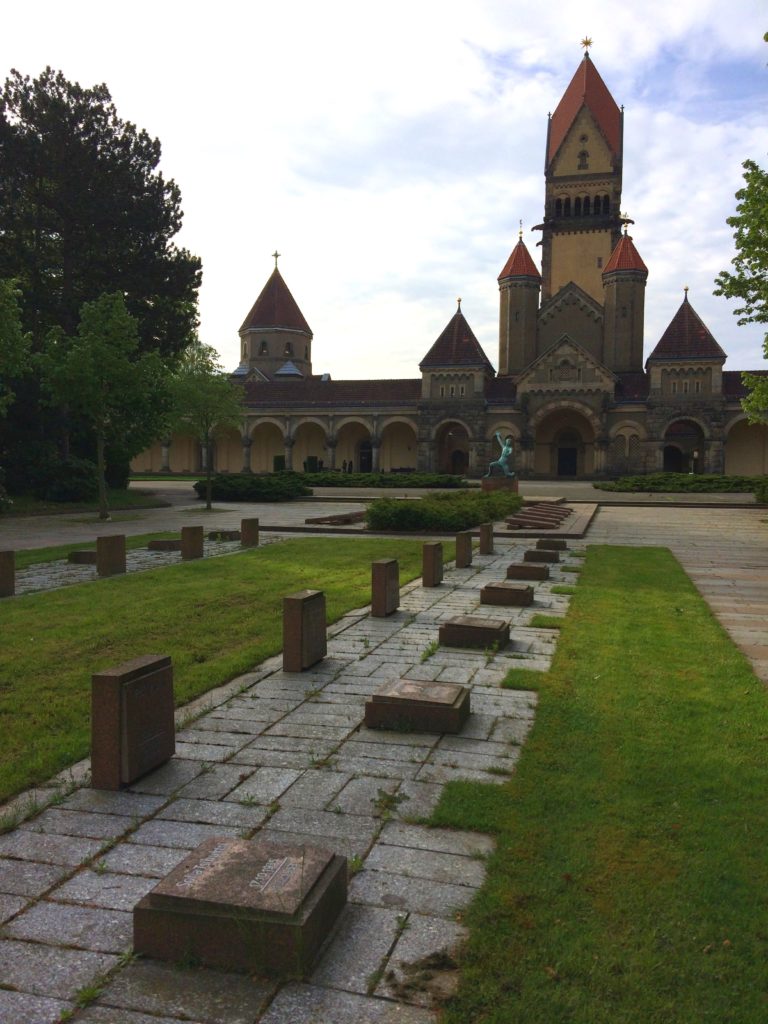 This photo is still inside the cemetery, but you can see the massive Battle of the Nations Monument in the background. 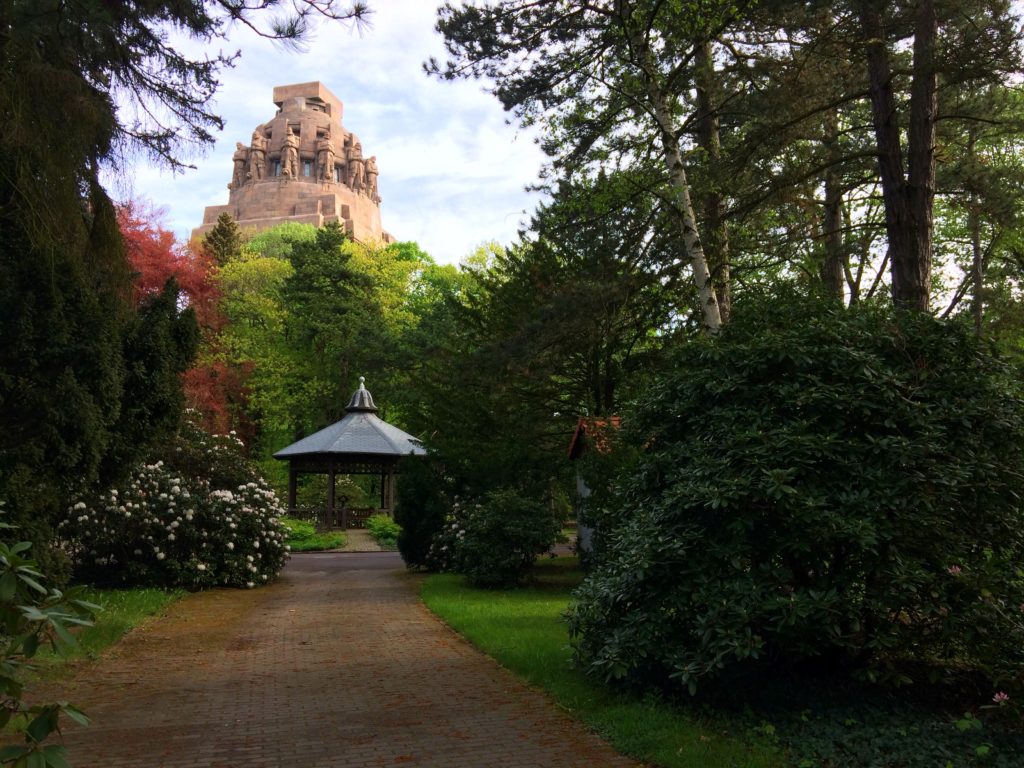 This huge monument was built in 1913 and my grandfather saw it in 1914.  If you look closely you can see two people at the base of the monument, which gives you a better feel for the size of this thing.  It’s really big! 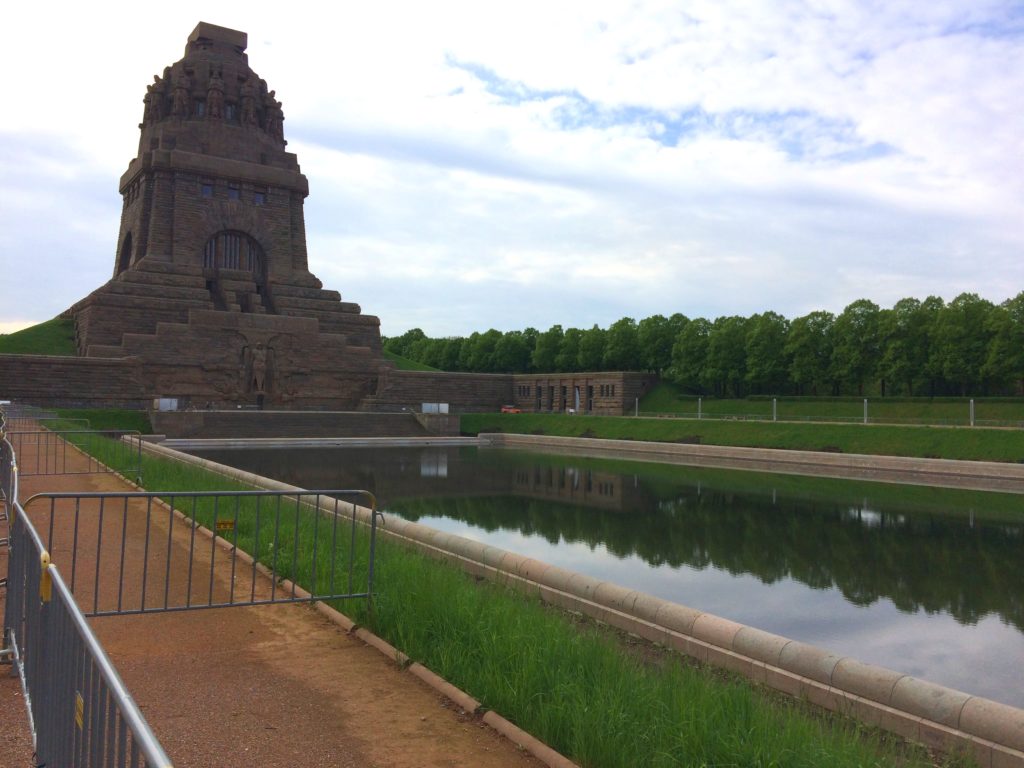 Photos don’t quite do it justice.  This monument is immense.  It’s 300 feet tall!  The monument commemorates Napoleon’s defeat at Leipzig.  It is claimed to stand on the spot of some of the bloodiest fighting, from where Napoleon ordered the retreat of his army. 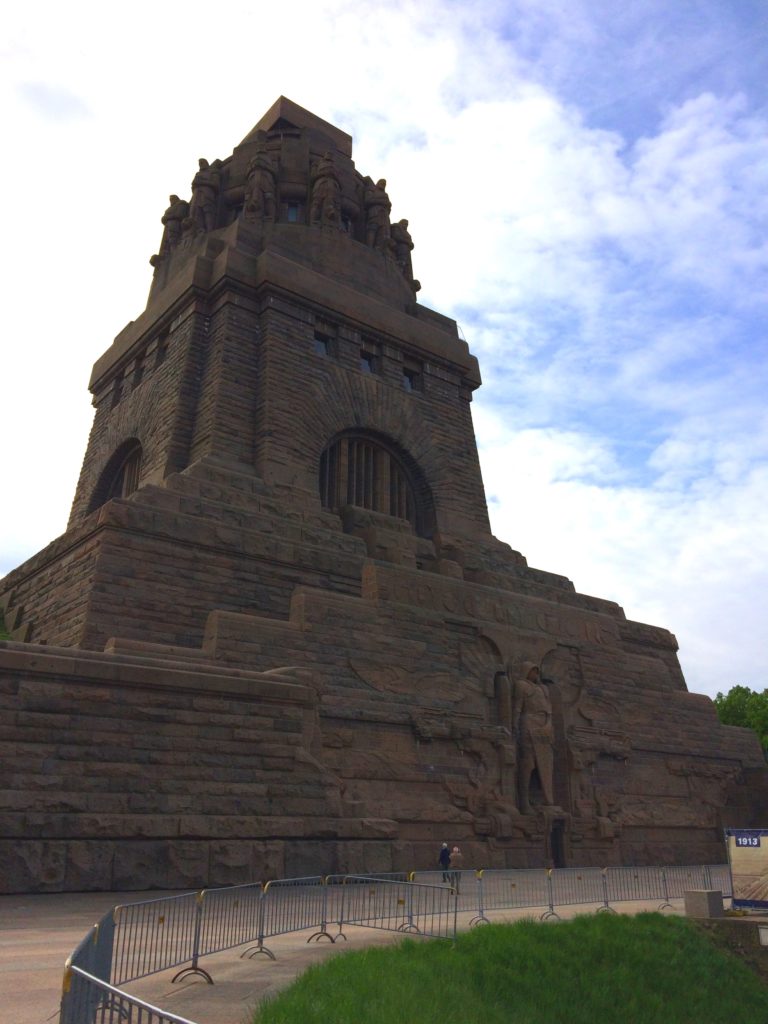 I didn’t have a lot of time in Leipzig, so I didn’t actually tour the monument or the museum or anything.  I just walked around it, took some photos, was amazed, and then got back on the road.

This is just some random stuff related to my travels through the countryside.

Here is the rental car that I got in Germany.  It’s an Opel Adam.  It’s just a bit bigger than a Mini Cooper.  And more streamlined.  I liked it.  It had all the bells and whistles.  And it ran great.  I ran at 105 mph (170 km/h) on the Autobahn for a while and this car didn’t even blink.  By the way, at that speed people were still zooming past me like I was standing still! 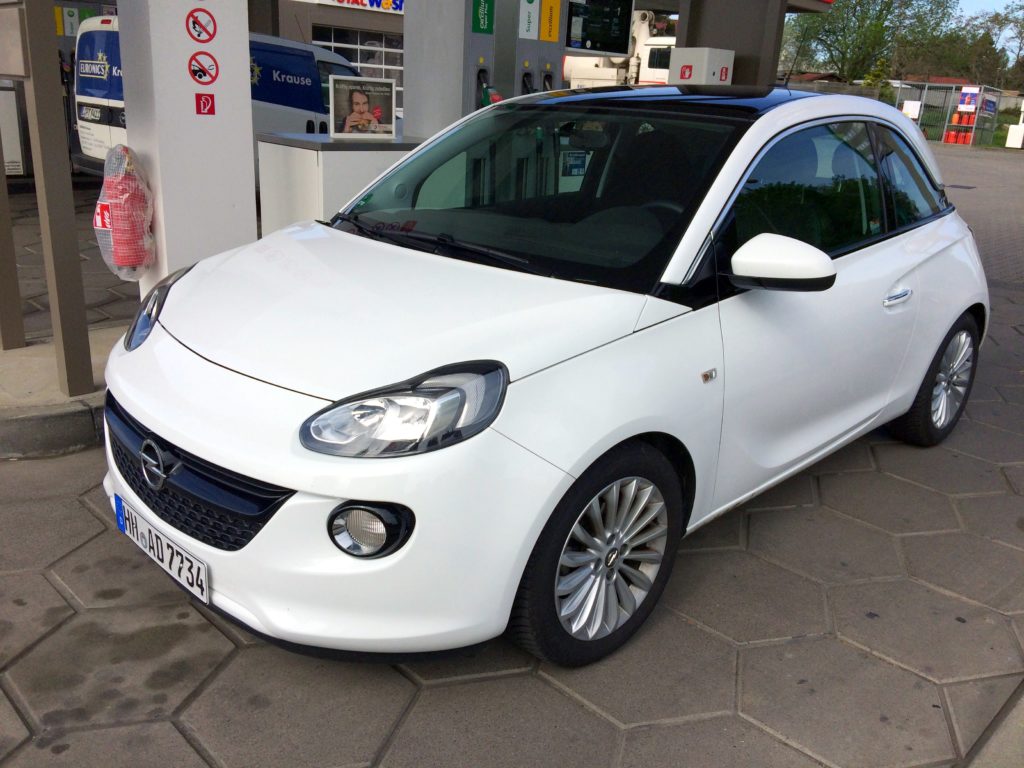 On my way out of Zaulsdorf, I thought it might be interesting to visit a couple of local country cemeteries.  Here is one of them.  It was very small, less than one city block.  I wondered if any of my ancient relatives were buried in any of these small town cemeteries in this area. 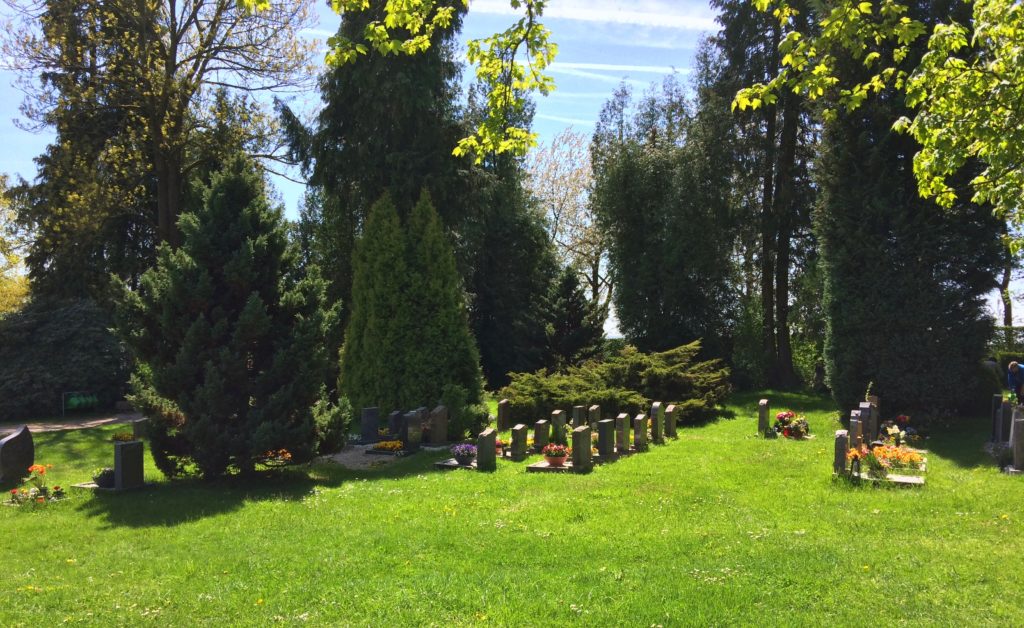 I did find a Leucht couple buried at one of the cemeteries that I visited.  But I don’t think they are from my family.  At least not a part of the family tree that we have found and documented. 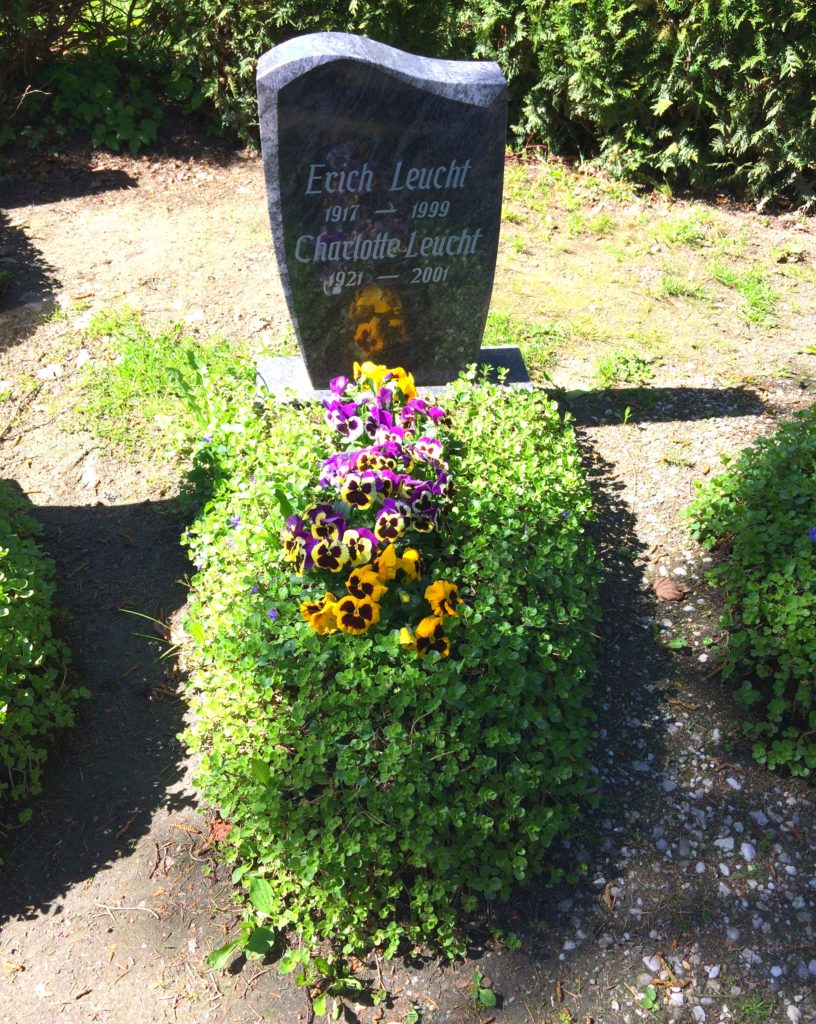 While driving from one small town cemetery to another, I passed by this building with Leucht painted real big on the side.  Obviously, I stopped to check it out!  It says: Curtains, Albert Leucht, Weaving 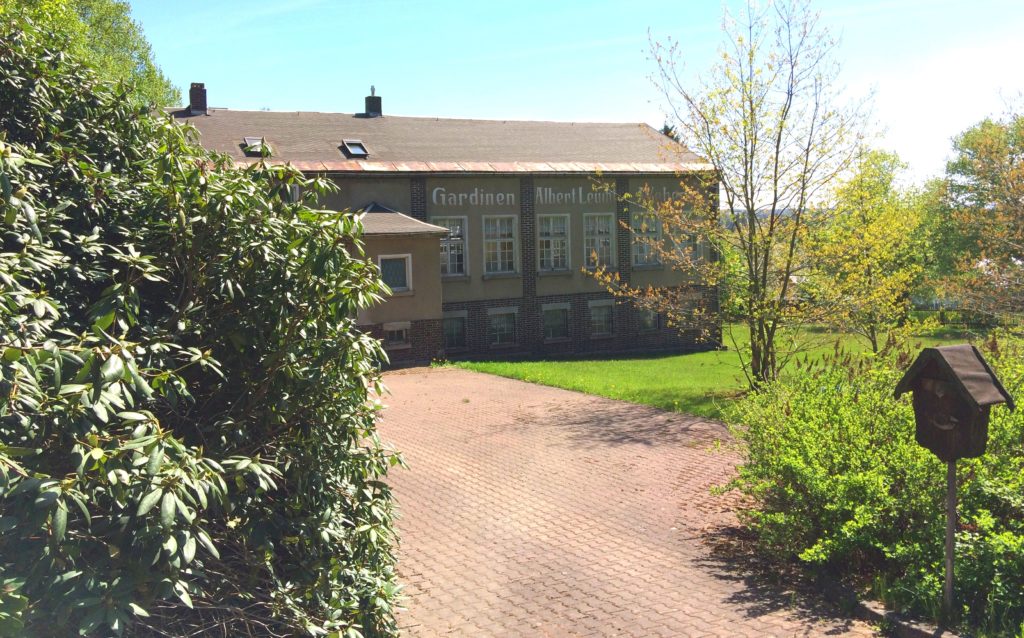 Neptune is the eighth and outermost planet in the solar system, with an average distance of 4.5 billion kilometers (equivalent to about 25.8 kilometers in this model).  It was discovered in 1846 on the basis of Uranus orbit interferences.  With a diameter of almost 50,000 kilometers (here about 28 cm), just four times the diameter of the earth, it is the fourth largest planet in our solar system.  Together with Uranus, Neptune forms the subgroup of the “ice giants”.  Neptune dominates by its size the outer zone of the planetary system.  Neptune currently has 14 known moons.  The gas planet is named after Neptune, the Roman god of the sea and the flowing waters.

Initiators Andreas Krauß – Olaf Graf
Planetary Trails Vogtland
A total of 8 paths lead from landmark points to the center – the observatory Rodewisch.  The lines between the starting points and the dome of the planetarium of the school observatory symbolize the distances between the planets of our solar system. Walk along the marked paths and experience a piece of wonderful (hiking) Vogtland.

Very cool.  I like that.  I wonder how many public schools shuttle their students all around the county to see all of these displays.  That’s a pretty cool learning experience.  Although it might make for a long day.

My next stop was Plauen, where my grandfather lived from age 4 to age 18, when he came to America!  Next time I’ll publish some details and photos from that part of my trip!