I normally don’t shave my beard unless I’m in a show that requires it, but you may have noticed me sporting a clean and smooth young looking face recently.  Well, this time I did it for science. 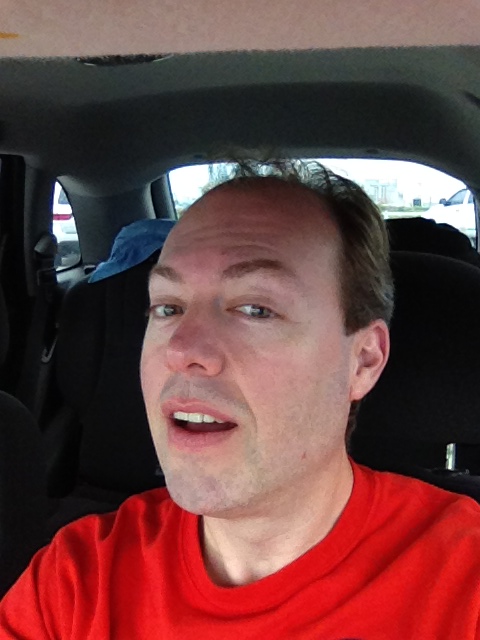 I recently volunteered to be a test subject for the medical research folks at NASA/KSC.  They have invented a new cryogenic or liquid air breathing pack which has been bench-top tested using a mechanical breathing machine and now they need to test it out on real live breathing machines, or human test subjects.

The reason I needed to be clean shaven is that the folks running the test needed really good data, including mask pressure, so the respirator needed to make a good tight seal around my nose and mouth. 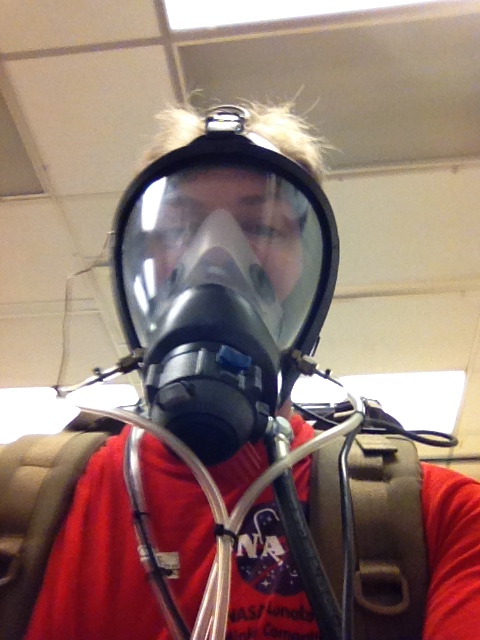 It was a very long 2 hour physical test regimen, and I performed the test regimen three separate times.  The photo below was taken early enough in one of the test sessions that I still had a smile on my face!   🙂 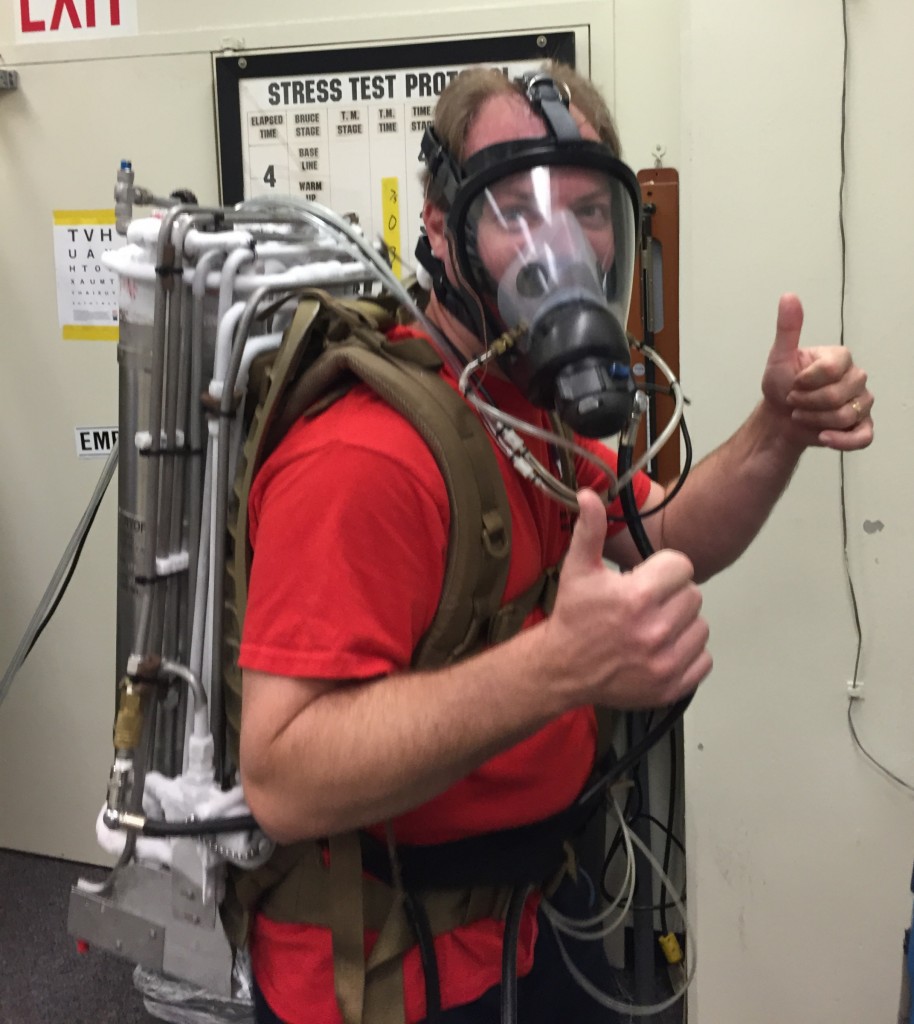 This breathing pack needed to be tested in several different situations, including crawling on the ground, laying on either side, laying on the back, walking and running on the treadmill, lifting a weight off the ground using a pulley, etc. 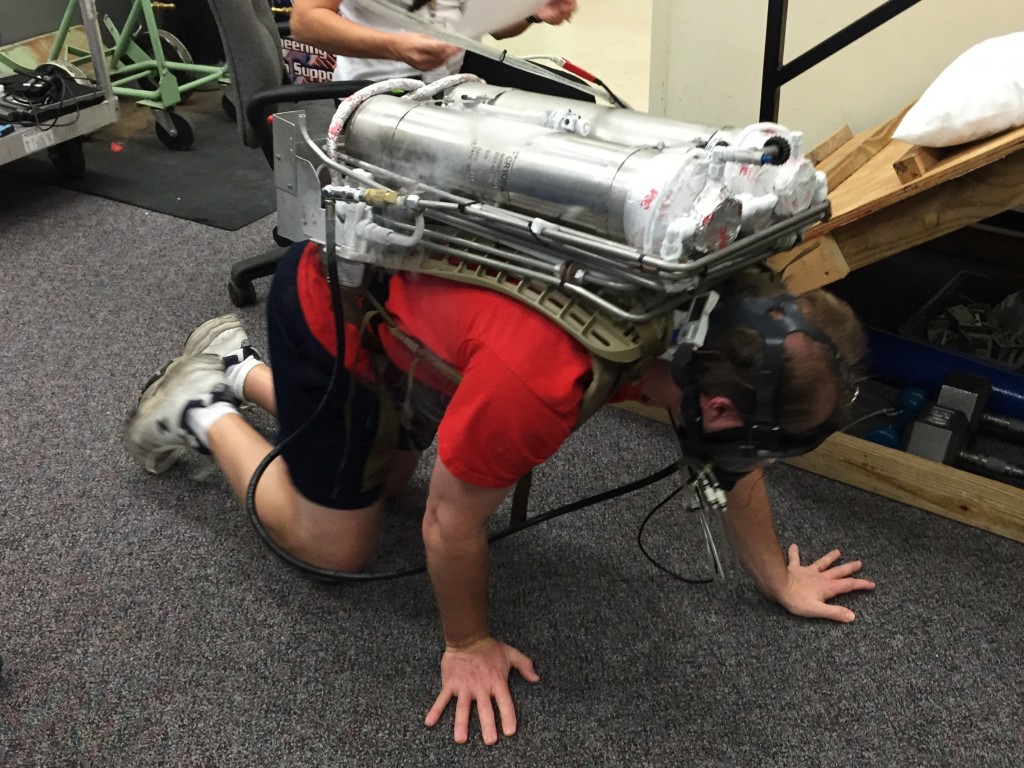 One of the sessions even involved carrying an extra 50 pounds up a steep incline and back down several times.  The breathing pack already weighed about 40 pounds, so this was pretty tiring. 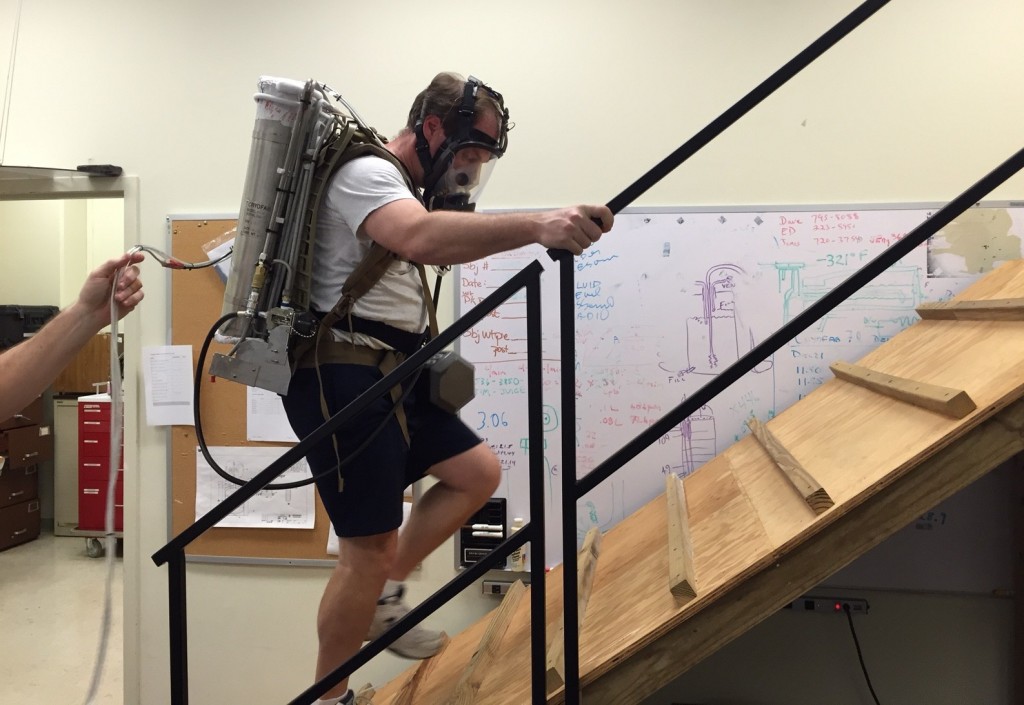 After this breathing pack is tested by several different test subjects, it could be qualified for use someday by mine workers, firefighters, rescue workers, etc.  That’s NASA technology at work for you!  After all, we’re about more than just launching rockets here at NASA!

I recently volunteered to be a test subject in a NASA/KSC study on motion sickness. I call it the “spinning chair of death” study for fun, but it’s really not too bad. Today was my turn in the chair and it was actually a breeze and I never even felt queezy. I guess I’m not very prone to motion sickness because I can count on one hand the total number of times I’ve ever felt motion sick.

Here are some details of the study:

The chair is actually a racing seat mounted on a wooden box. The wooden box holds all kinds of electronic gear (biological sensors) and a laptop PC powered by a car battery and an inverter. The wooden box is connected to a gearbox and a motor that spins it at 15 RPM’s or about 4 seconds per revolution. It’s not real fast. The whole contraption is also tilted from vertical 15 degrees. It’s this tilt combined with the rotation that gives your inner ear a real workout and causes most people to get motion sick. 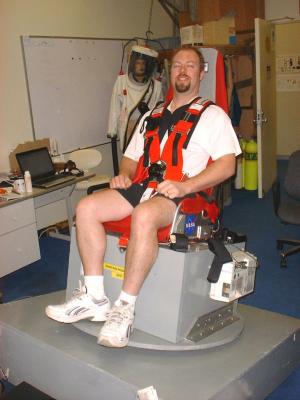 .
Photo of me in the chair after my test was
complete and all the sensors were removed.

After filling out about 5 pages of medical history paperwork, the doc weighed me and then put 2 sets of EKG pads on my chest and side. One set was for local recording on the laptop PC that spun around along with the chair, and the other set was for wirelessly transmitting across the room so that the doctor could track my health during the test and stop the test if things went south. Then they sat me in the racing chair and strapped me in fairly snugly. It’s a pretty comfortable chair.

Then they hooked a constant blood pressure cuff on my left middle finger. This little cuff measures your blood pressure every single time your heart beats. It’s pretty cool. It inflates just like the standard cuffs do, but it pressure pulsates with your heartbeat and somehow the thing uses an infared beam or something to look at your blood flowing in your finger. I really don’t know how the thing works, but it’s a cool little device.

The last thing they hooked up to me was even cooler than the constant blood pressure cuff. It was a doppler blood flow sensor that was mounted against my right temple on my forehead. It’s just like the sonogram device a doctor uses to find the heartbeat of a fetus in the womb. And it sounds exactly like that, because they turned the sound up when they were installing the thing. They put this little helmet thing on my forehead and tightened it down snugly. Then they played around with the position of the doppler sensor on my temple until they found just the right artery and just the right position on that artery. The doctors and technicians were all crowded around the laptop watching the realtime plot waves while the sensor was being positioned. This sensor was difficult for them to get just right, but when they got it, it was rock solid … even when I moved my head around.

Then the doc gave me final instructions on the hand signals that I would be using during the test. Every minute during the test, the doc would ask me to rate my motion sickness symptoms on a scale from 1 to 5. With 1 being no symptoms, to 5 being “I think I’m gonna be sick so stop the test right now!”. Then they started the test with a 5 minute waiting baseline. I breathed deeply and tried to relax for the baseline measurements. 5 minutes is a long time when you’re waiting for it to pass in silence. They wanted all subjects to perform the rotating part with their eyes closed, so I closed mine for the baseline also.

Then the rotation started. It was to last 15 minutes or until I felt sick. Every minute the doc asked me to hold up fingers for my symptoms. For the first couple of minutes I felt like I was moving exactly as I knew I was moving. During the rotation, my body and head were being forced by gravity forward, to one side, backward, and then to the other side.

But then my brain kind of switched things around and it didn’t feel like I was spinning anymore. My head and body were still being pushed forward, to one side, backward, and then to the other side, but my brain made me feel like this motion was because I was being translated around on an air table and always facing the same direction. Imagine your hand on a hockey puck on an air table or on an ice rink. Now move (translate) the puck around in a large circle without rotating the actual puck. This is what I felt like I was doing now and it didn’t feel bad at all. As a matter of fact, I probably could have fallen asleep doing this if given another 15 minutes or so. After a while it was actually soothing. If my brain hadn’t switched me from feeling like I was rotating to feeling like I was just translating, I don’t know if I’d have made it.

After the 15 minutes were up, I had given them 15 motion sickness symptom scores of 1 with my hand signals and had no symptoms at all anywhere. No dizziness or anything going on in my stomach. During the last cycle, the chair slowed down and then finally stopped in the same position it started in. When it finally stopped completely, I felt my brain for just a couple of seconds continue to want to rotate and I’ll bet my head even twitched a couple of times towards the direction of rotation. But that passed after just a couple seconds and then I felt perfectly normal. They had another 5 minute period of waiting and then the test was complete.

The test was fun and I would do it again if given the opportunity. If I wasn’t having so much fun in my current organization, this department would actually be a pretty cool place to work. My buddy Dave works in this department and actually built the “rotating chair of death” and put together all the electronics that go with it.
Kurt