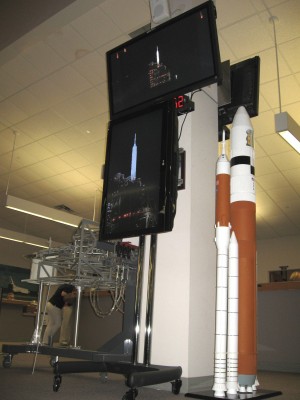 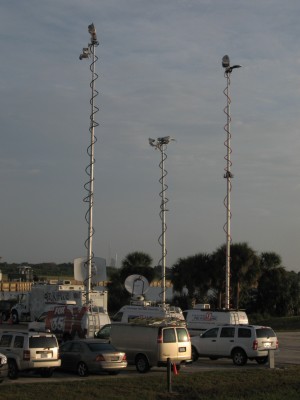 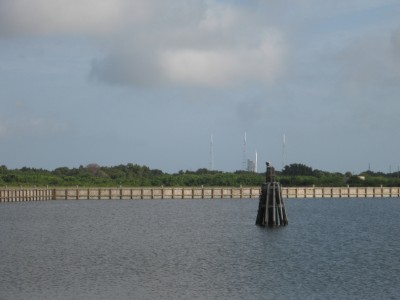 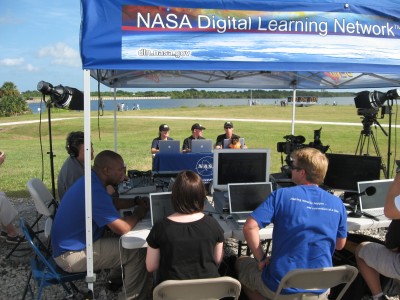 History was made tonight and I was there. It was pretty cool to witness the rollout of the Ares I-X test flight rocket first hand. Ares I is designed to replace the Shuttle for getting astronauts into orbit. Enough talk … here are the photos that I took and also a short edited video (click for larger versions of the photos):

This is the employee signature banner for Ares I-X.  Each flight gets a banner that is displayed along with the vehicle and these banners are signed by KSC employees who have worked on that mission.  I worked on the ground control system for the Ares I-X mission, so I made sure I signed this banner.  I wonder if you can find my signature…

Can you find my signature now?

The Ares I-X rocket doesn’t look terribly huge inside the massive Vehicle Assembly Building, but it’s nearly as tall as the Saturn V rockets that we used to go to the moon during the Apollo program.

Excitement is in the air as the new big rocket emerges from the VAB.

Isn’t she big and beautiful!

Not symmetrical by design.  We’re re-using a Shuttle mobile launcher platform for this flight, which has two holes for solid rocket booster exhaust.  So we mounted the Ares I-X rocket over one of the two SRB holes in the platform.

Glowing in the spotlights.

The spotlights were very bat-symbol-like.  I didn’t get a good photo of it, but there was enough moisture in the air to clearly see the rocket’s silouette projected big and bold up into the sky.  It was quite impressive.

Obligatory photo of me standing in front of the rocket for the scrapbook.

Here is the video:

Or you can watch the video directly on YouTube here:  http://www.youtube.com/watch?v=OHEla1t0byQ