I don’t travel all that much in general, and this is my first time outside of the United States, so I may have been surprised or excited about things that are very common and everyday in Europe or other parts of the world.  So please take that into consideration while reading this.

Here is a photo of the big Lufthansa 747 jumbo jet that took me across the pond.  It was about an 8 hour flight from Orlando to Frankfurt and then another couple hours from Frankfurt to Krakow.  The 8 hour flight started at about 8pm Florida time, so it was an overnight flight. 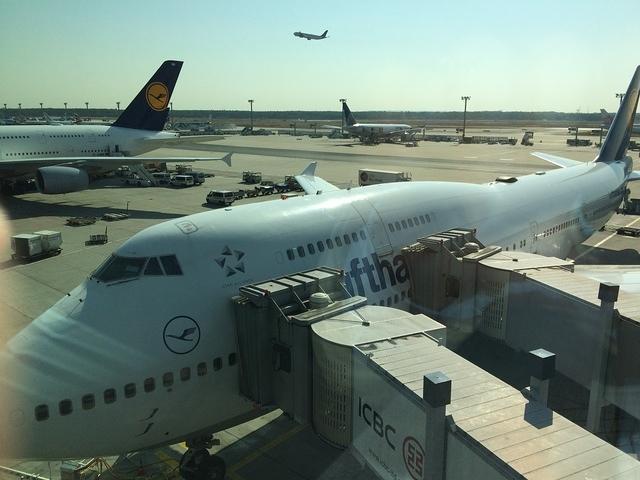 I chose a window seat towards the very back of the plane.  The Economy class seats were 10 across. 3 seats, aisle, 4 seats, aisle and then 3 seats.  But in the very back where the tail of the airplane starts to get thinner, there were only 8 seats across.  2, 4, 2.  So I chose a window seat where there were only 2 seats to choose from.  My thinking was that the likelihood of another single passenger to take that single seat next to me was less likely than a couple who would take an available 2 seats next to me.  And I was right.  Nobody sat next to me in the aisle seat.

Each seat had a complimentary entertainment system mounted in the forward seat’s headrest.  The system had lots of music, TV shows, and feature films to choose from.  It also included a live animation of the flight as it progressed, which I thought was pretty cool.  Since this was an overnight flight, I didn’t use the entertainment system very much.  I tried to sleep instead.  Poland is 6 hours ahead of Florida, so I tried to go to sleep earlier than normal in order to get used to Poland time. 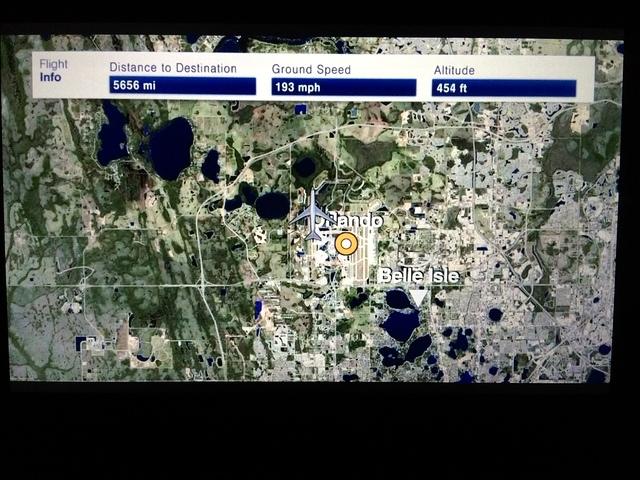 As I mentioned, there was nobody sitting in the aisle seat next to me, so I tried to lay down across both seats and get some sleep.  I usually don’t have much trouble getting to sleep.  But two seats is just not enough room.  Not even for me.  Not even when curled up into the fetal position.  I tried.  I really tried.  I tried on my back.  On one side.  On the other side.  It just didn’t work.  So I sat upright and slept like pretty much everyone else on the plane.  I ended up getting about 4 to 5 hours of sleep.  Not bad considering the conditions.

Here is a photo of Germany about 30 minutes before we landed in Frankfurt.  You can see quite a few of those giant modern wind turbines down there. 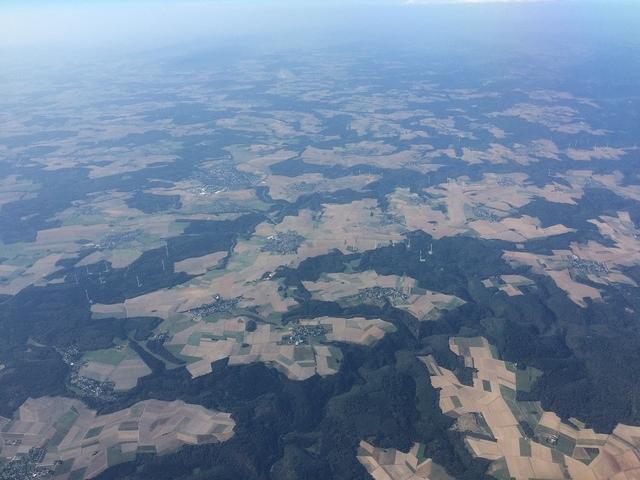 I snapped this photo out the window of what turned out to be Oberwesel, Germany which looks like a cute little village with a cute little port there on a dogleg of the Rhine River.  Click here to explore this area using Google Maps. 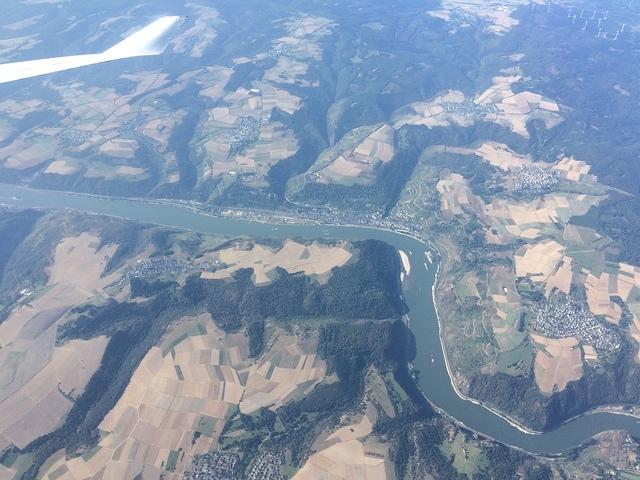 We got basically a pilot’s view of the approach on the entertainment system as we came in for a landing in Frankfort. 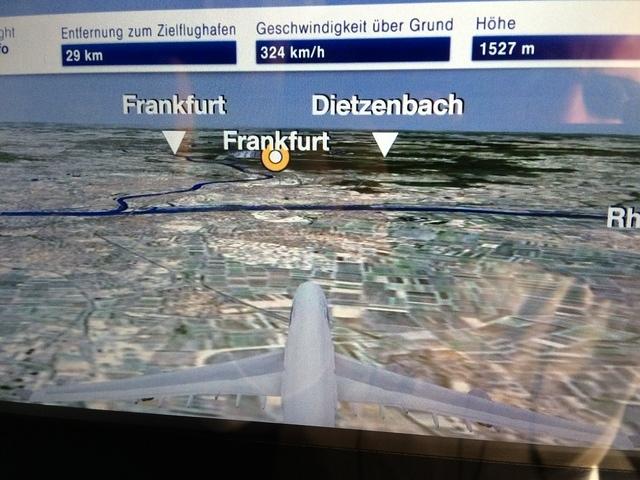 Once we landed at Frankfort, I had to walk quite a ways around the airport to get to my gate for my flight to Krakow.  And I had to go through immigration, which had quite a long line.  I also had to go through the x-ray scanners again.

Speaking of the x-ray scanners.  I don’t travel much, so forgive me if this is common.  But both Frankfort and Krakow had a nice automated system for getting the plastic bins back to the start of the line after those bins were used to carry bags and purses through the x-ray scanner.  At Orlando, workers have to manually stack up these plastic bins and haul them back around to the start of the line.  A completely manual and highly labor intensive process.

Once I got to my gate in Frankfort for my short flight to Krakow, the gate was automated.  Each passenger just scanned their boarding pass and a little gate opened up for you to walk through.  Pretty cool.  I love automation.  When it works.

So I thought I was walking down a ramp to board my plane to Krakow at this point.  But I was wrong.  I was walking down stairs to a ground level garage of sorts where there were several busses waiting for us to climb aboard.  These busses took us to our planes which were parked way out on the tarmac away from the terminal.  I guess this is necessary if your terminal cannot handle all the planes and flights.  But I thought it was dangerous.  I had already scanned my boarding pass and there was no way to make sure passengers didn’t get on the wrong bus or the wrong plane at this point.  I got on the right bus and the right plane, but there was nothing stopping me from doing otherwise.

Once I arrived in Krakow, there was a car and driver waiting for me holding a sign with my name on it.  That was pretty cool.  He drove me about 20 minutes to the hotel in Krakow and I gave him 2 US dollars as a tip.  He said that was highly uncommon but he was very excited to get it, though.

Checking into the Novotel Hotel Centrum was quick and easy.  Everyone in Poland speaks pretty good English.

When I got on the elevator, I noticed that the lobby floor was labeled floor zero.  This was the only elevator I used during my entire trip, so I don’t know if this was common or not. 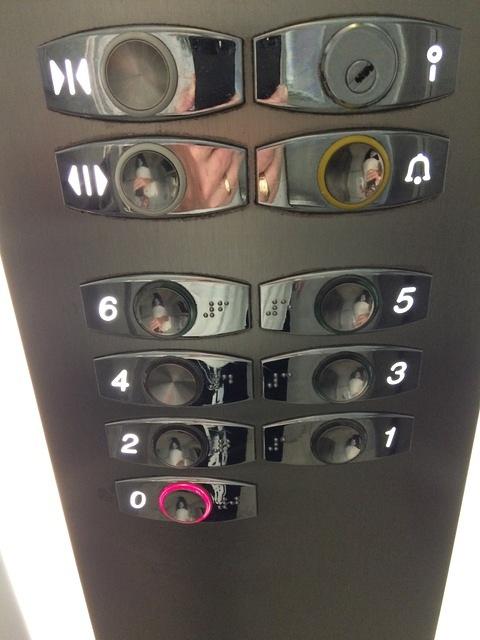 I loved the design of the hotel bathroom.  It was very simple and clean.  I loved the fact that the toilet didn’t actually touch the floor.  I’m thinking that this is a more sanitary situation than a toilet that goes down into the floor.

During my 5 day stay in Poland, I noticed that none of the toilets actually touched the floor.  I also noticed that all of the toilets used the water efficient two-button system of flushing.  A small button for number 1 and a large button for number 2.  In theory, this conserves water.  But in practice, I noticed that the light number 1 flush was seriously powerful and used quite a bit of water.  And the number 2 flush was just crazy.  Stand back, people!

I will admit that when I got into my hotel room I had to go to the bathroom in the dark because I could not for the life of me figure out how to turn the lights on. Afterwards, after the pressure was off, I figured out that this little electronic thingy mounted on the wall just inside my hotel room door labeled “Hotelcard” was for me to stick my room key into.  And magically it allowed all the lights, and apparently also the air conditioning, to work!  Genius! 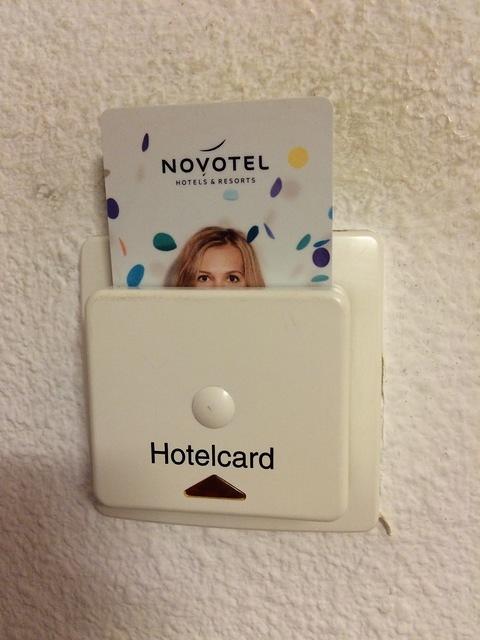 While experiencing Krakow, Poland for nearly a week, this historical dude riding a fake horse kept coming up.  Literally several times each day.  Apparently it’s a Krakow tradition called Lajkonik.  There are several stories and explanations, so I’ll let you read them on your own. 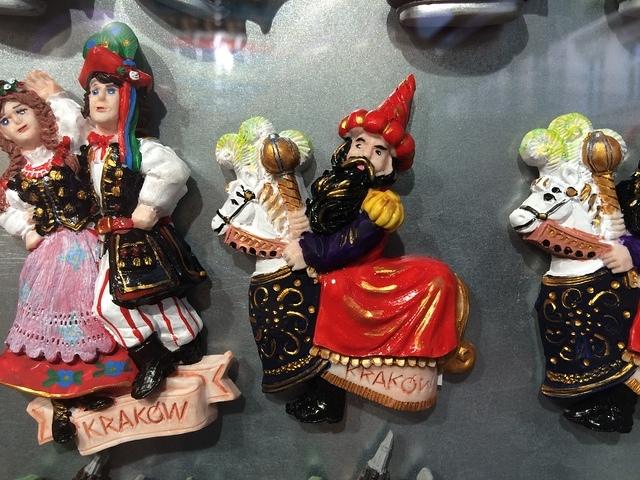 Here is a flight of stairs combined with a ramp for cyclists.  Very cool. 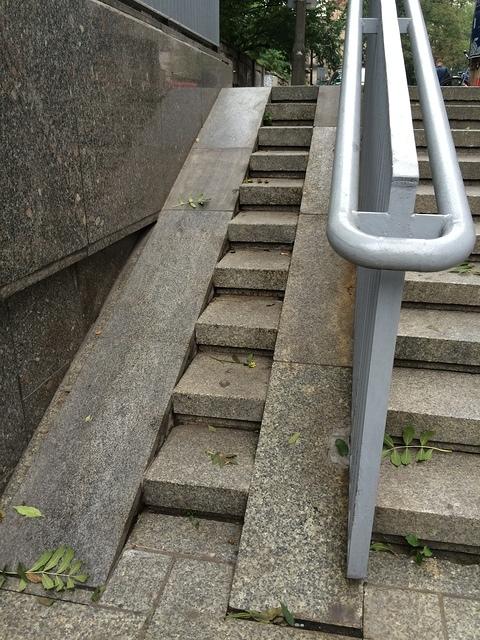 Almost all the streets I encountered while in Krakow are cobblestone.  Some were even quite decorative and beautiful. 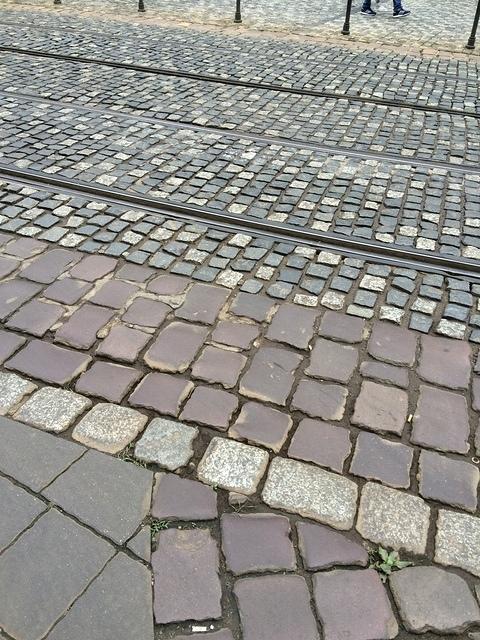 One thing I noticed right away when walking around Krakow is that people only cross at marked crosswalks.  I also noticed that there were very few crossing signals for pedestrians.  Like in the photo below.  Pedestrians just wait for a clearing and they go.  And if cars happen upon pedestrians crossing in these marked zones, they always stop.  I get the feeling that if you try to cross outside one of these marked crosswalks, the cars would just run you over, though. 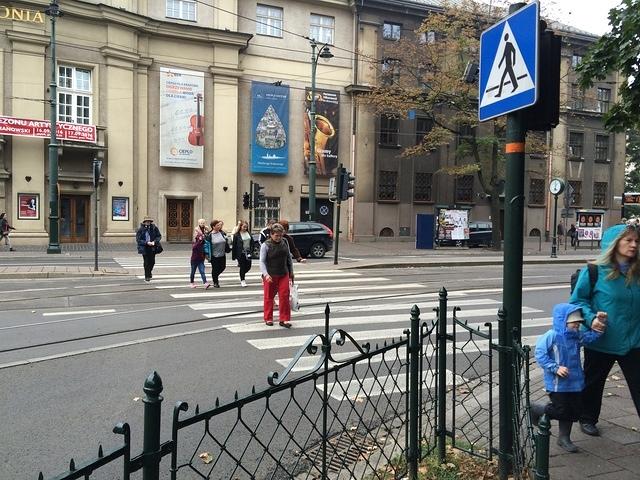 Many Polish words are very close to the English version.  Like “alkohole” for “alcohol”.  The word “alkohole” just cracks me up every time I see it, though. 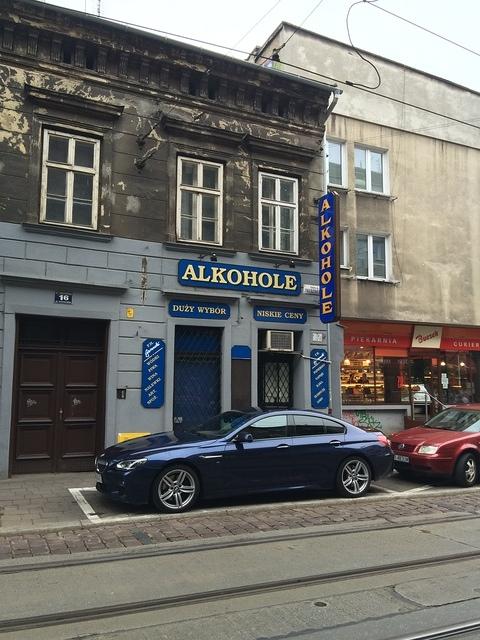 And here is a selfie I took in the Krakow central town square.  It was chilly that day.  The high was only 60 degF.  Several days while I was there, the high was 75 degF which was unseasonably warm. 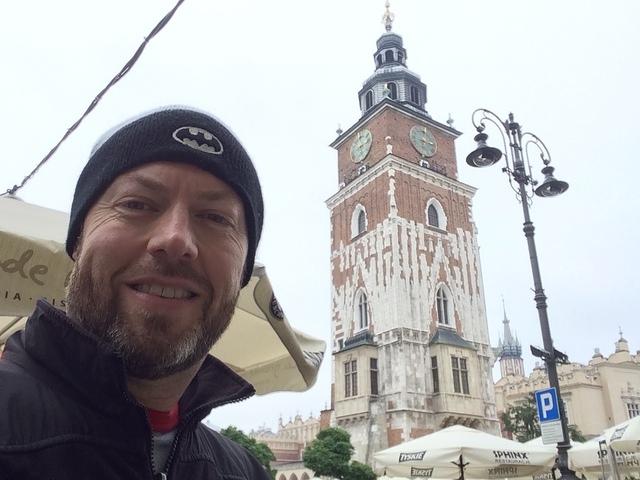 I did not drive while I was in Krakow, but I don’t think it would have been bad.  It’s not a very big city and there appeared to be some parking available.  I noticed that gas was about 4 US dollars per gallon, while back in Florida it was right at 2 dollars.  Yes, I did the conversion for liters and also for Polish Zloty.

I didn’t get the green running-man exit signs at first.  Probably because I’m used to exit signs being red instead of green.

One of my random observations of Poland is that everyone there smokes like a chimney.  I didn’t see very many electronic cigarettes.  Just old fashioned tobacco ones.  And lots of them.  Sometimes I even had trouble getting away from the smoke and finding fresh air.

Another random observation is when you order a Coke in a restaurant, you never get a big glass or a big cup like in America.  You get a teeny tiny little 6 or so ounce glass.  Barely enough for a meal.  They drink a lot of water and beer here.  Mostly sparkling water, which I’m not a fan of.

Well, that about covers my trip to Krakow, Poland!  Thanks for your interest!