Last week after speaking at a software developer conference in Berlin Germany, I had the opportunity to take several personal days while there and I got to see quite a bit of the city! It was pretty amazing!

There was so much to see and do in the city of Berlin, that I can’t fit it all into a single blog post!  So welcome to part 2 of Berlin sights!

Checkpoint Charlie (or Checkpoint C) was a famous crossing point between East Berlin and West Berlin during the Cold War.  The original booth is on display in a museum, but a copy of the booth is situated on the original site for tourists.  Along with Military Police actors posing for photographs. 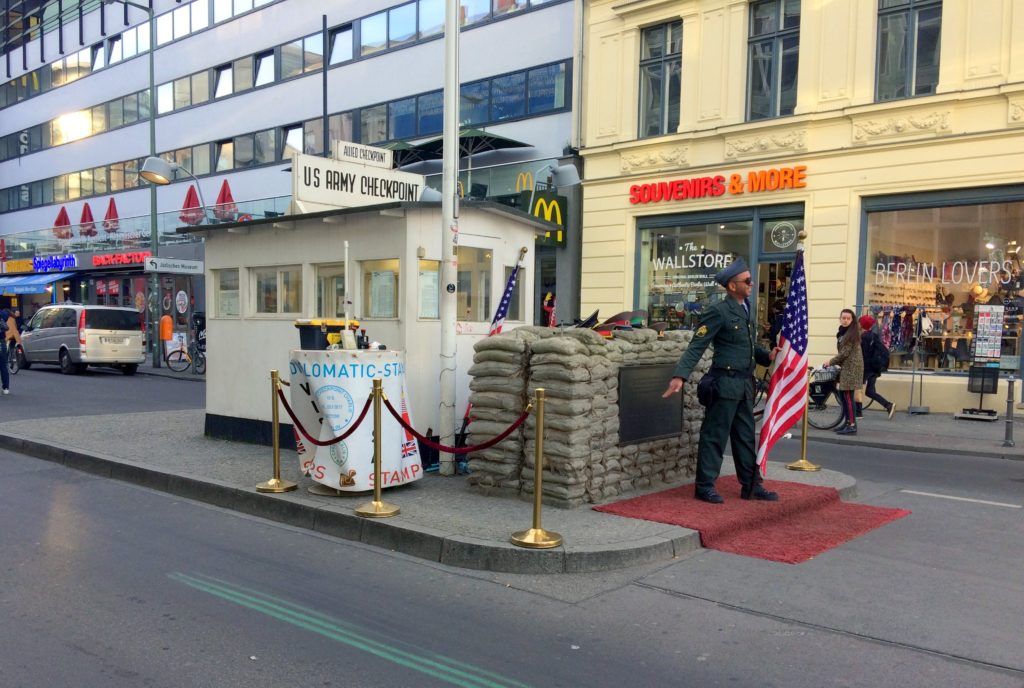 Only one block west of Checkpoint Charlie is a memorial or a monument to the Berlin Wall.  It is a 200 meter (650 foot) long section of the wall that was never torn down and is now protected by a fence.  Although the wall was torn into and chipped away before being protected as a memorial.  This is not the only stretch of the Berlin Wall that still stands, though.  There are several throughout the city. 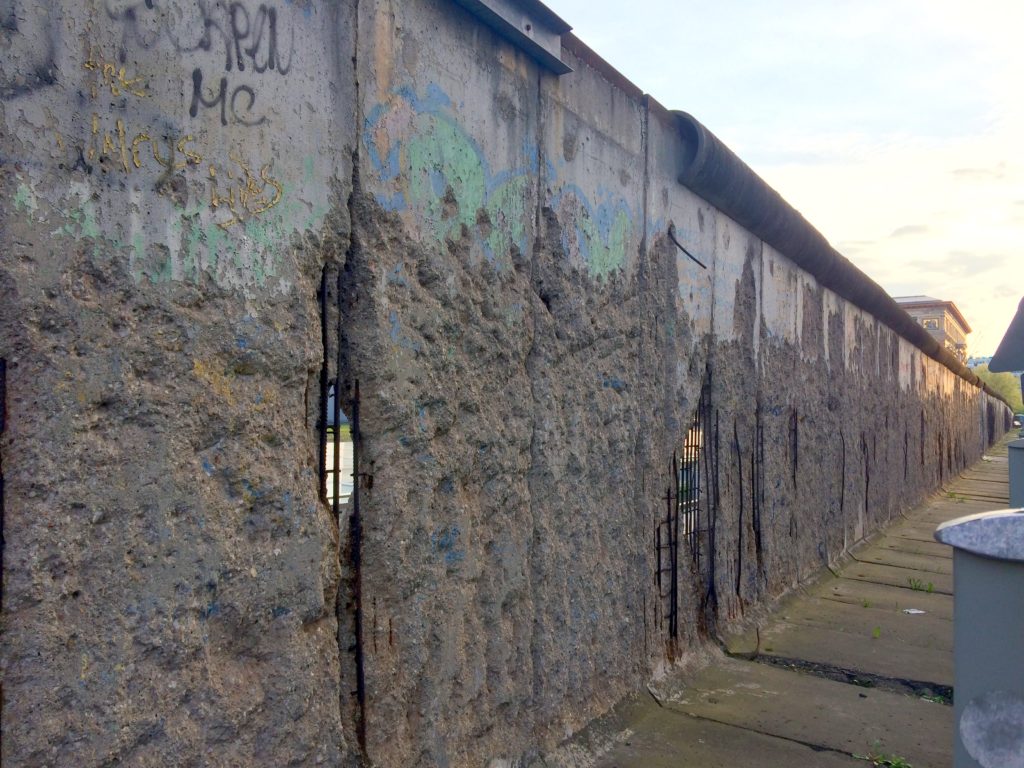 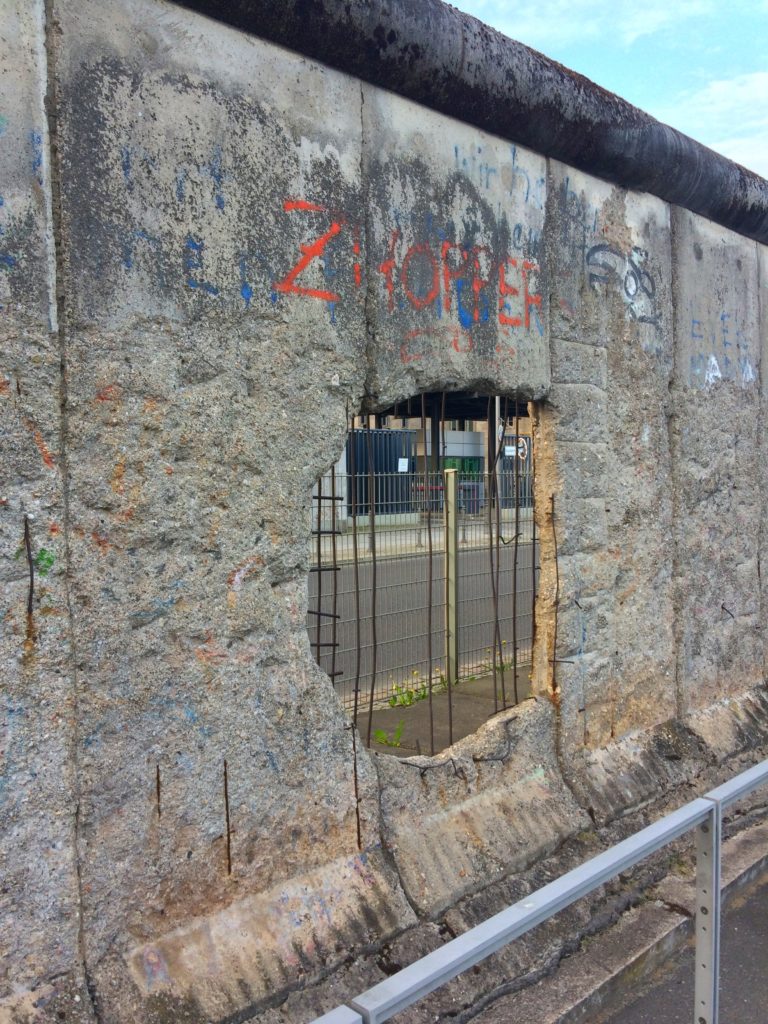 Small sections can be found throughout the city on display too.  This one was just a block from Checkpoint Charlie.

And this one was just across the street from Checkpoint Charlie.

I dashed through the German Historical Museum in only 3 hours one afternoon, but you can easily spend an entire day going through all the displays there.  It is laid out chronologically, so you can go quickly through time periods that you are less interested in and you can spend more time on other periods.  I didn’t take a lot of photos inside.  It was a bit overwhelming.

Here is a 16th century book that I thought was pretty cool.  It was hand-drawn and hand-written on parchment.  My phone camera and the dim lighting didn’t allow me to capture the incredible detail.  Each page is a unique work of art. 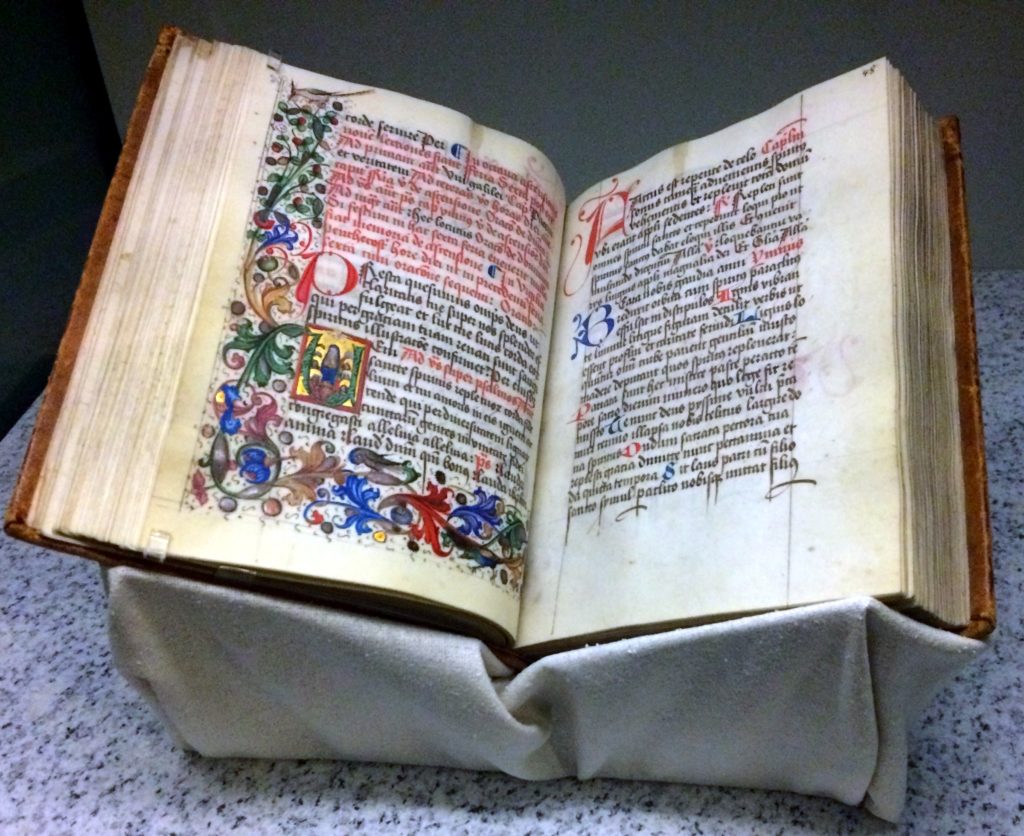 Here is an actual prosthetic arm from the 16th century.  It’s made out of iron and wood. 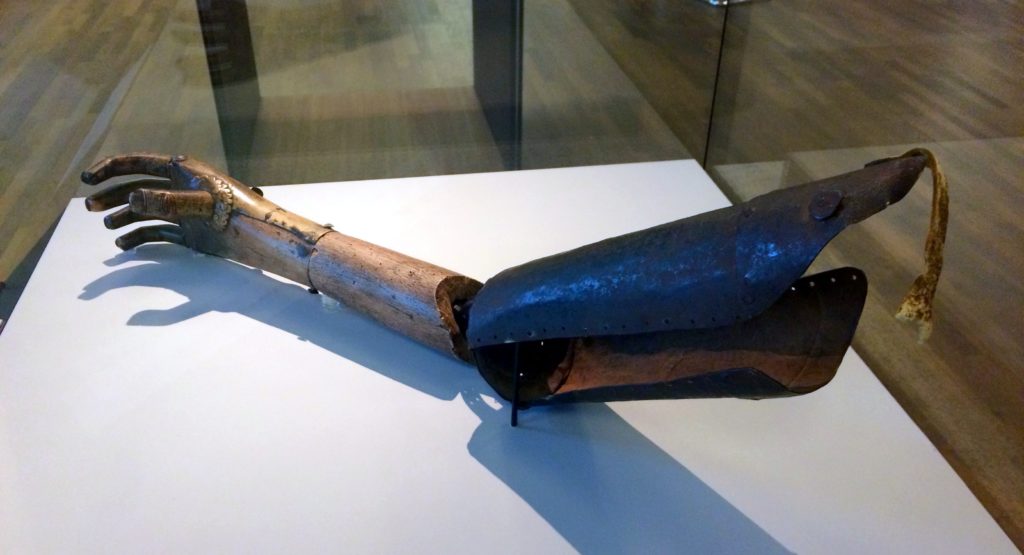 It was probably made for a high ranking knight who had lost his arm in battle.  The elbow has 6 different positions that the wearer could set. 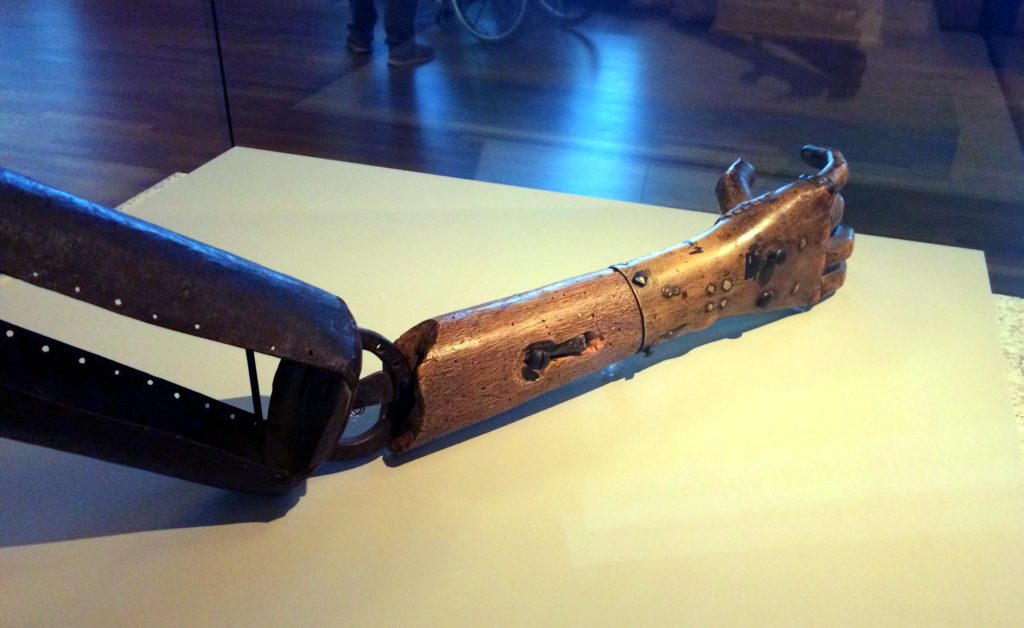 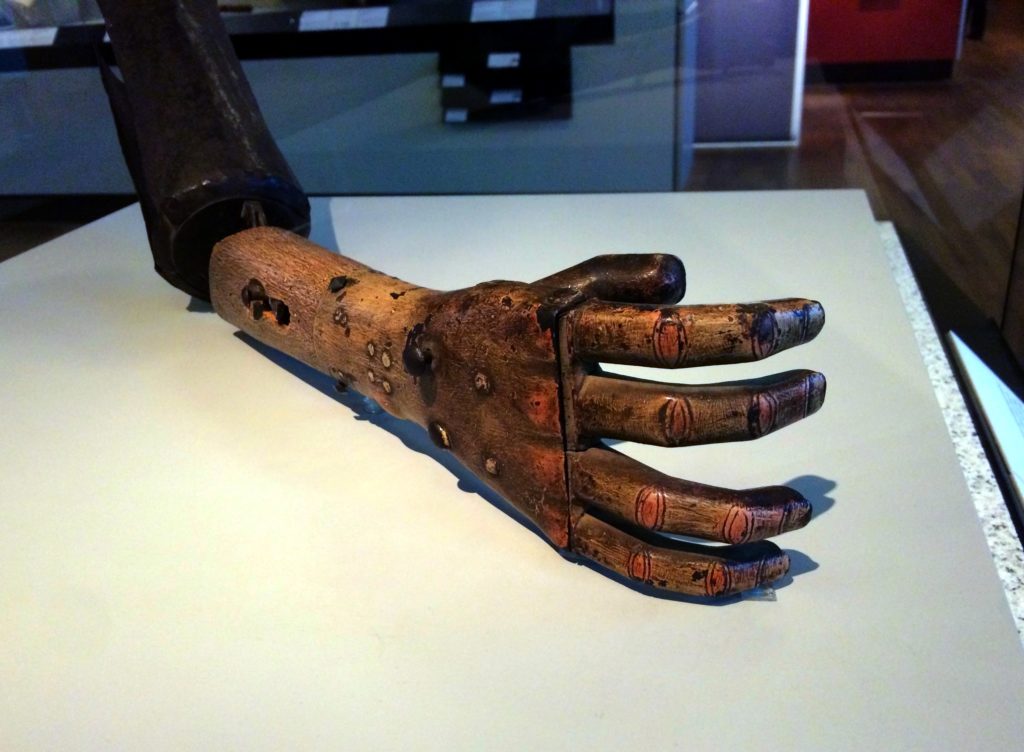 Both of these inventors seemed to independently invent their versions around the same time period.  And they integrated each others ideas into their own inventions.  They even worked together for a while.

I ran out of time by the time I got to the Hitler section and WWII and then the Cold War.  I should have skimmed through some of the earlier history, because there are a lot of cool things to learn in the WWII and Cold War sections of the museum.

Here is the ballot from the German elections on March 5th of 1933.  Adolf Hitler called for this election shortly after he had been appointed as Chancellor.  You can see that the voters had 15 different choices, and that the Nazi party was on top of the list. 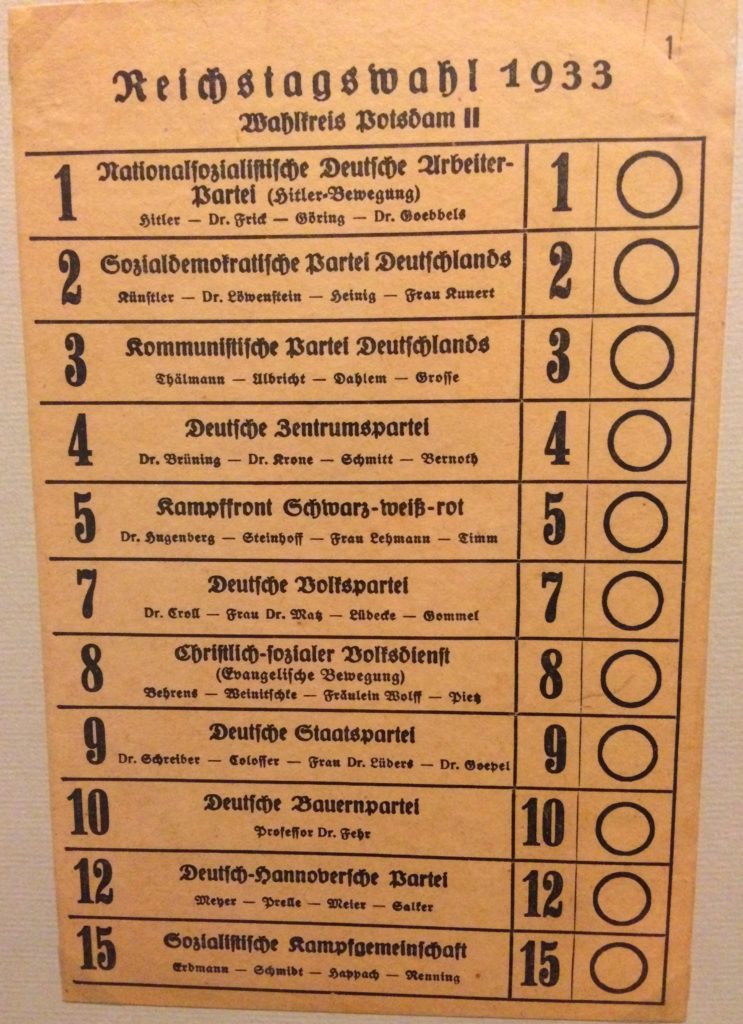 Here is one of the Nazi party campaign posters for this election.  It says: “The Reich will never be destroyed – if you stay united and loyal”.  This poster blended the old Reich President (Paul von Hindenburg) with the new young Chancellor, while placing Hitler’s head subtly in the foreground. 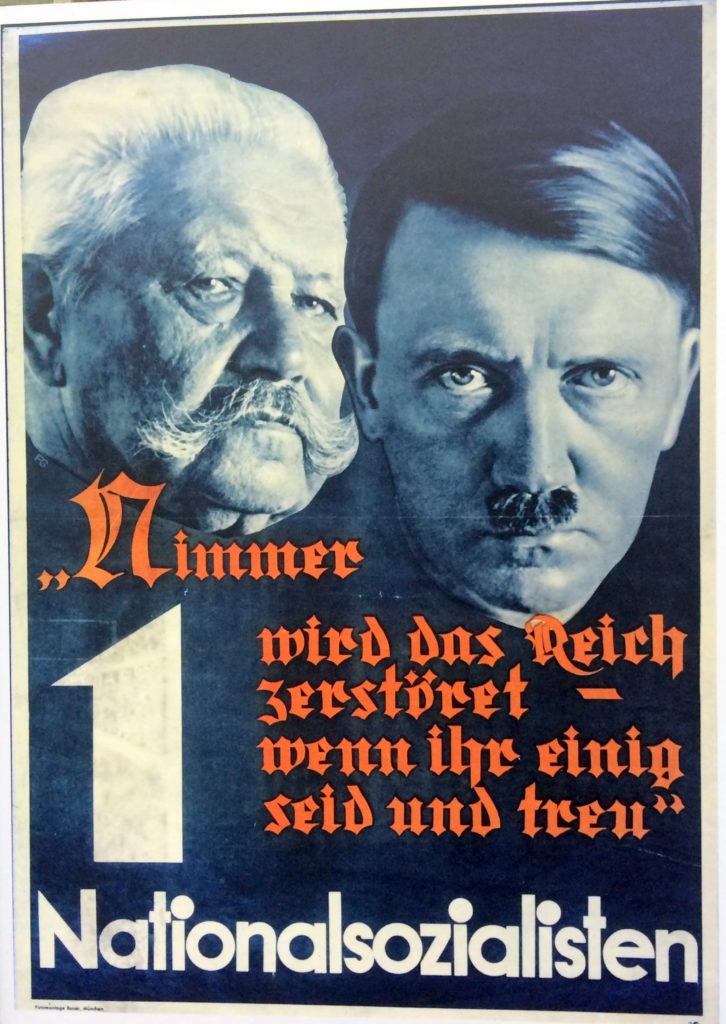 They had nearly 90% voter turnout for this election and Hitler’s Nazi party won about 44% of the votes.  Just two weeks after this election, Hitler persuaded and intimidated other parties and was able to pass an act that effectively gave him dictatorial powers.  Within a few months, the Nazis banned all other parties and dissolved the German Parliament (Reichstag).  And the rest is history.

Just one block south of the Brandenburg Gate, is a really interesting and creative Holocaust Memorial, or Memorial to the Murdered Jews of Europe.  It covers an entire large city block … almost 5 acres.

When you first enter the park and see the memorial, it appears to be just rows and rows of concrete slabs.  The slabs look sort of like graves in a large cemetery.  There are thousands and thousands of these concrete slabs and they are not all the same height.  It’s quite beautiful. 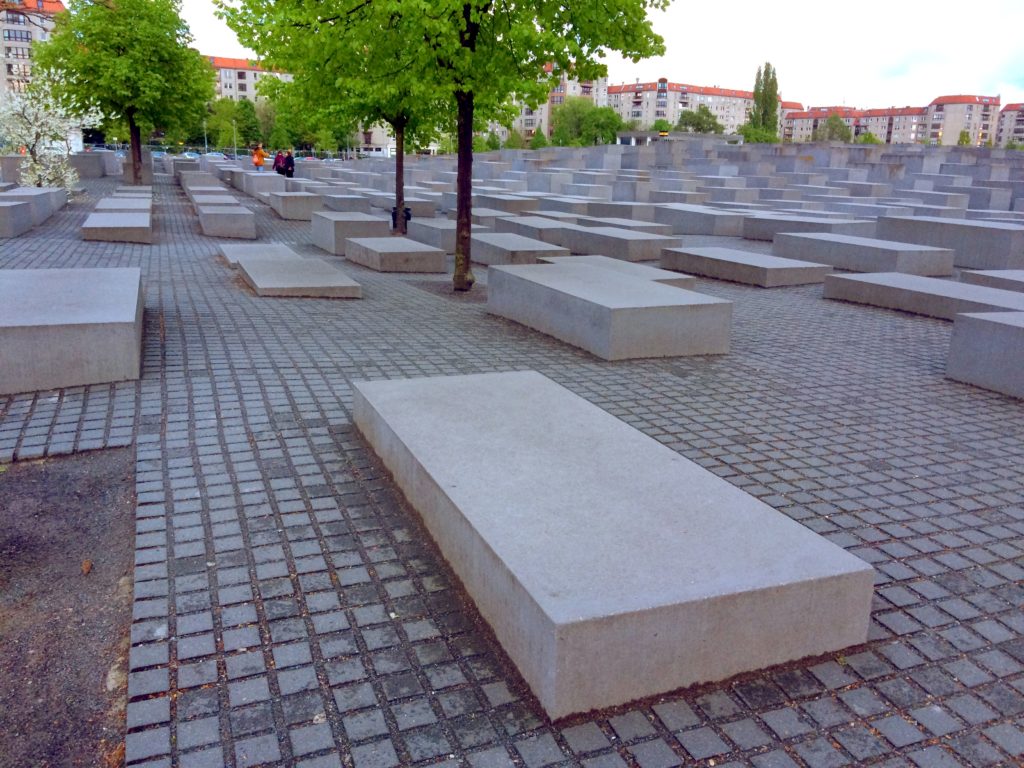 But then when you walk into the memorial, you quickly realize that the ground undulates up and down wildly as you get deeper into the interior of the memorial.  The ground gets lower and lower.  And the concrete slabs get higher and higher.  Eventually the slabs tower over all visitors that explore the park.  The mood of visitors turns to confusion, isolation, and even a little bit of worry. 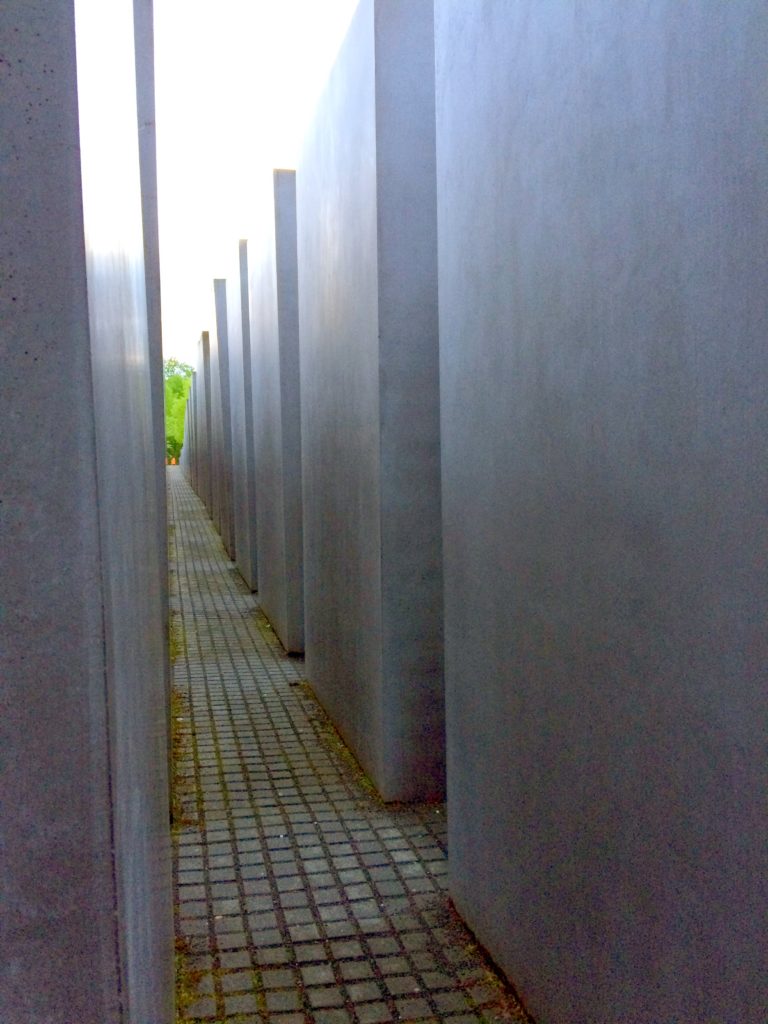 The artist who designed this memorial says that the slabs “are designed to produce an uneasy, confusing atmosphere”.  It’s a unique experience.

Buried under ground in the middle of the memorial, is an information center, but it was closed for the day when I was there.  So I didn’t get to go inside.

Next time I’ll publish yet another blog post showing even more of the fun sightseeing that I did in Berlin. Because in 3 days I saw a ton of cool stuff and it won’t all fit into even two blog posts!