Last week after speaking at a software developer conference in Berlin Germany, I had the opportunity to take several personal days while there and I got to see quite a bit of the city!  It was pretty amazing!

The weather there was pretty mild with highs around 60 to 70 degF and lows around 55. It rained lightly one afternoon and one full day while I was there, but the rest of the time it was partly sunny. 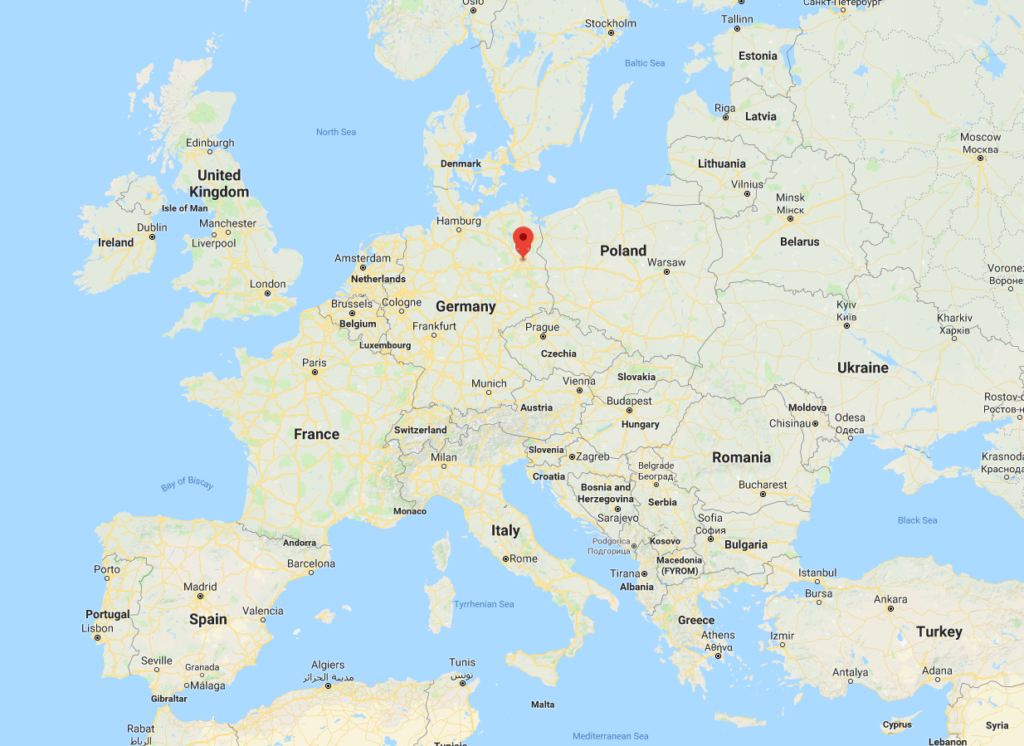 Berlin is the capital and the largest city in Germany.  It’s located in the north east of Germany.

In the middle of Berlin is this huge TV Tower!  It’s impossible to miss!  The giant shiny sphere towards the top has an observation level and a rotating restaurant! 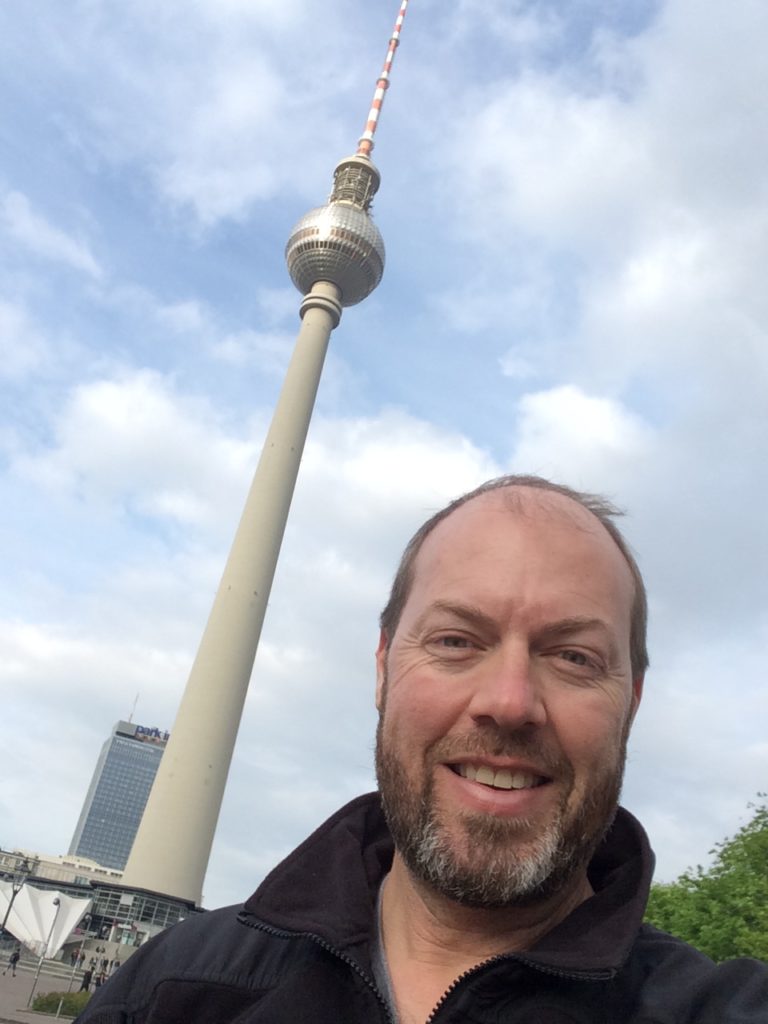 Here are my best photos of the Fernsehturm (TV Tower): 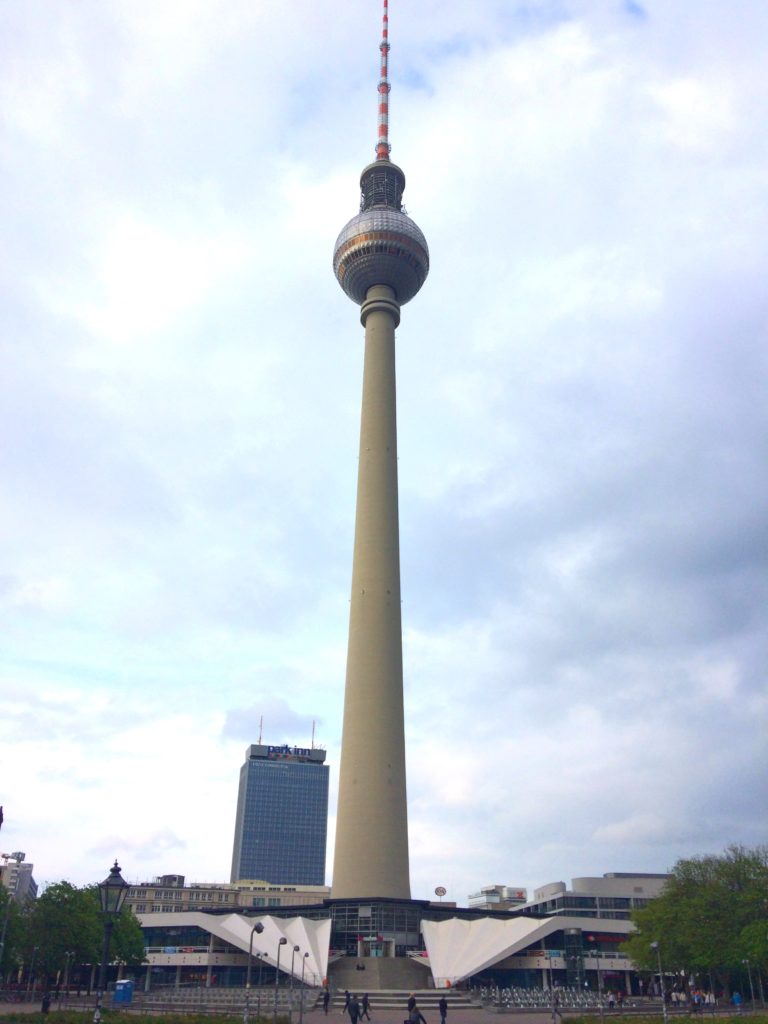 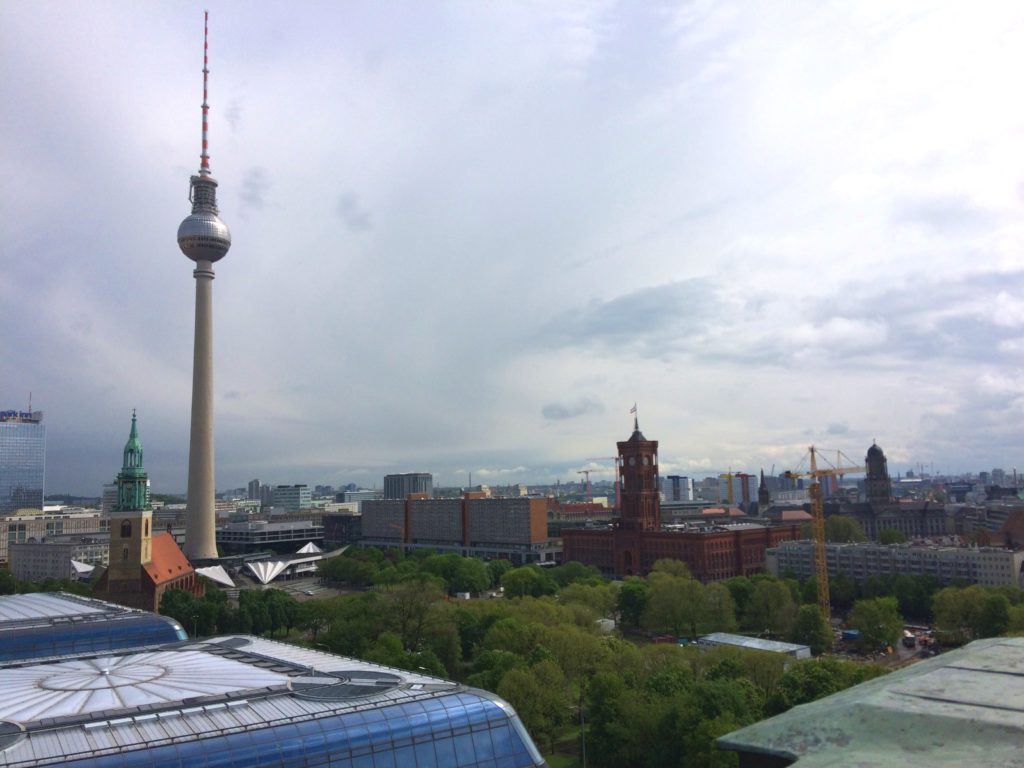 The Siegessäule, which literally translates into Victory Column, is also centrally located in Berlin.  It’s actually smack in the middle of a huge park which is sort of like Central Park in New York City.  Großer (Great) Tiergarten (Zoo) Park is Berlin’s oldest and largest park.  And as you might suspect by the name, it has a pretty awesome zoo inside! 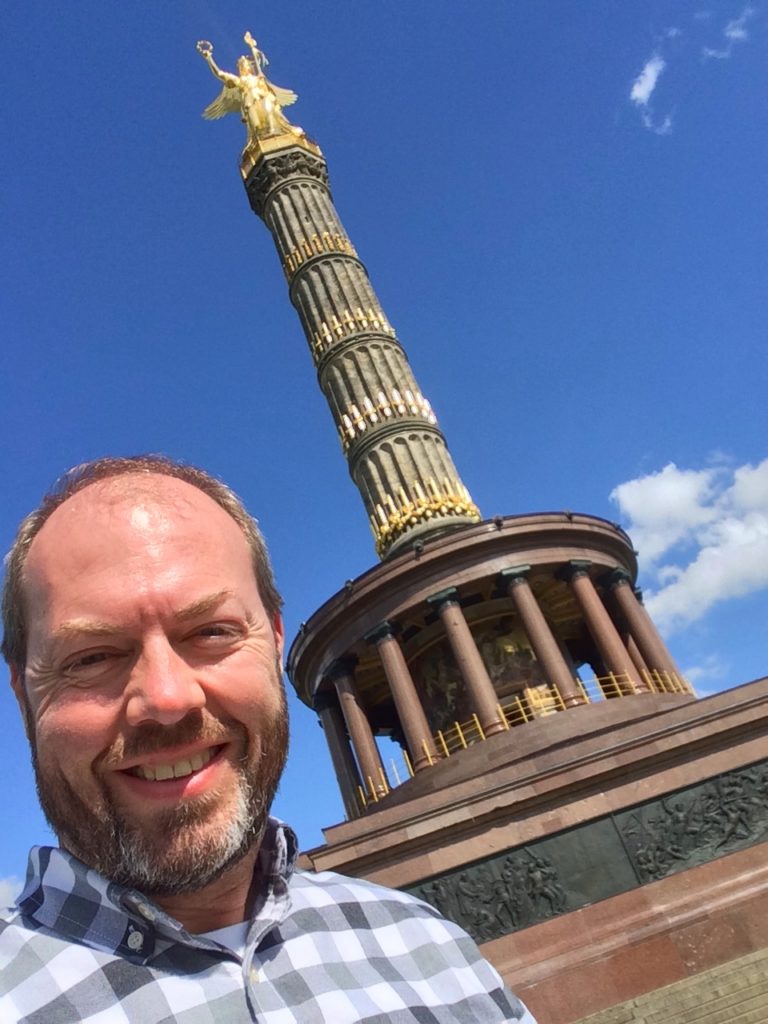 Victory Column was built in the late 1800s to commemorate several recent war victories.  It’s actually bigger than it looks in photos.  It’s about 20 stories tall and tourists can actually climb an internal spiral staircase to an outdoor viewing platform at the top of the tower, just under the gold statue. 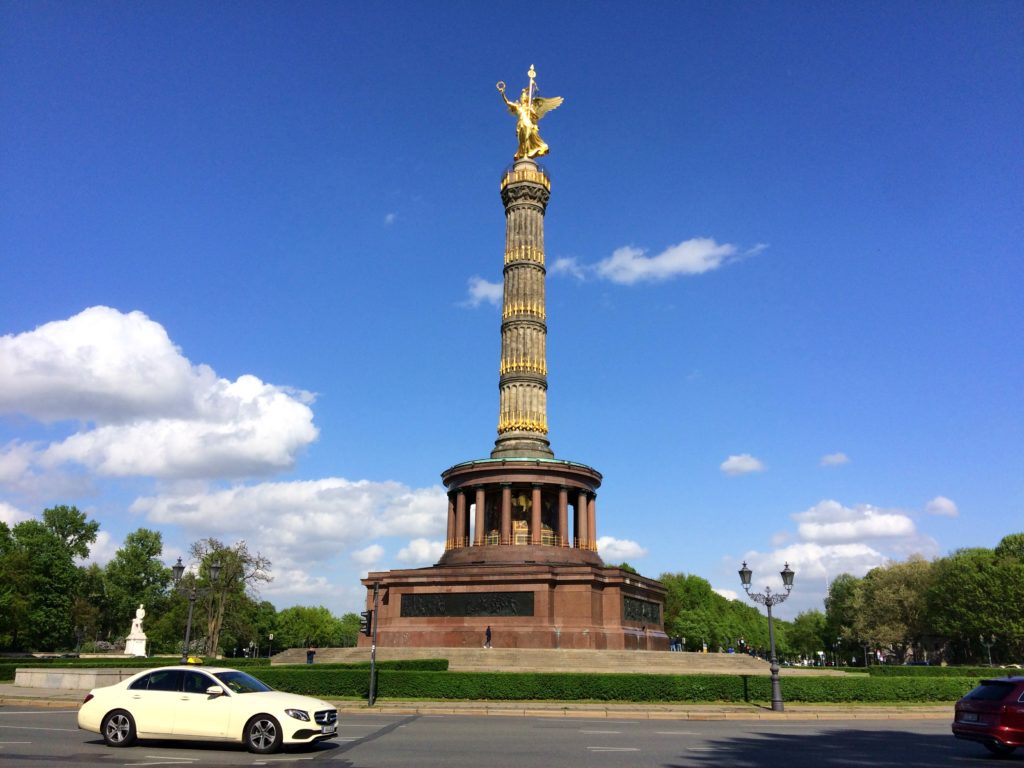 Here is a close up photo of one of the four massive bronze reliefs that are mounted on the four sides of the base.  You can see that there are some bullet holes in the relief from the second World War and there are also some bronze pieces of the relief that are missing, like both rear legs of the second horse.

The marble base had several small chunks missing as it was damaged a bit during the war. 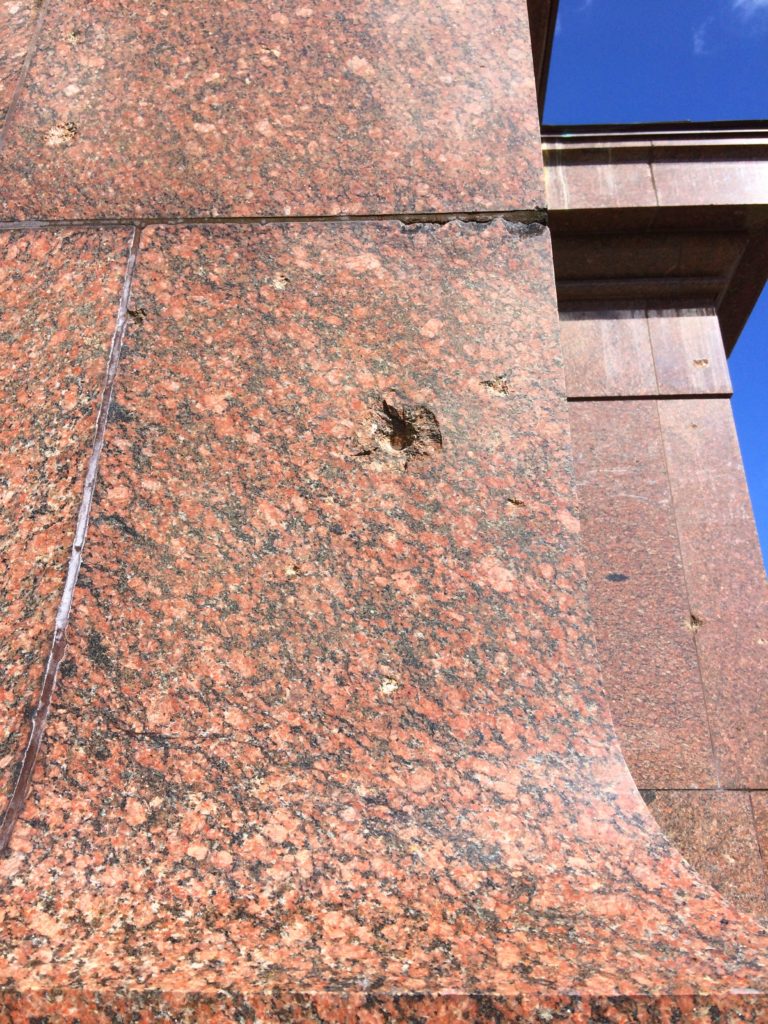 The Brandenburg Gate is probably the best known, most photographed landmarks in Germany.  It was built in the late 1700s, so it’s quite old.

It used to be a customs gate for both pedestrian and vehicular traffic.  Through the years, many political parties (including the Nazis) have paraded through the gate as a symbol of their strength and victory.  The Berlin Wall, which was built nearby, stopped all traffic through the gate for nearly three decades.  After the Berlin Wall fell, the entire area became a pedestrian plaza, so vehicles no longer travel through this gate.

This is what it looks like from the east. 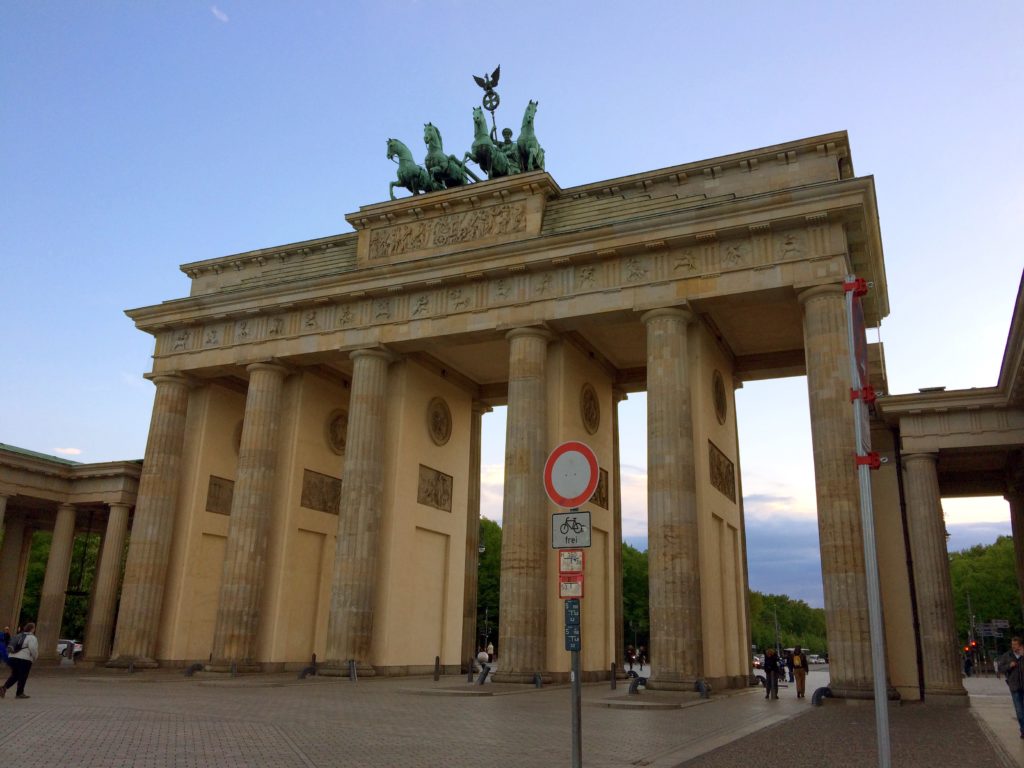 And from the west.

Here is the gate at sunset.  This is a very popular tourist destination, regardless of the time of day or night.

The Berlin Cathedral is centrally located on Museum Island in the middle of Berlin, a hotspot area for tourism.  It’s quite a big church and it stands out easily. 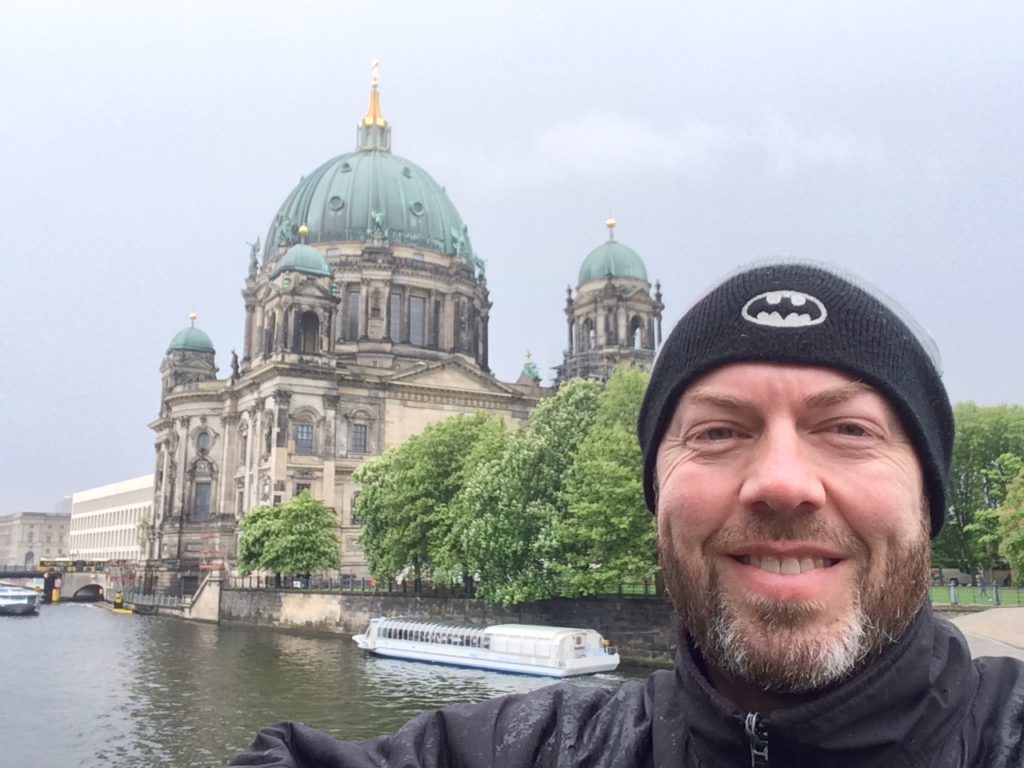 It’s very open and spacious inside.

This photo shows more detail of the ceiling domes from inside. 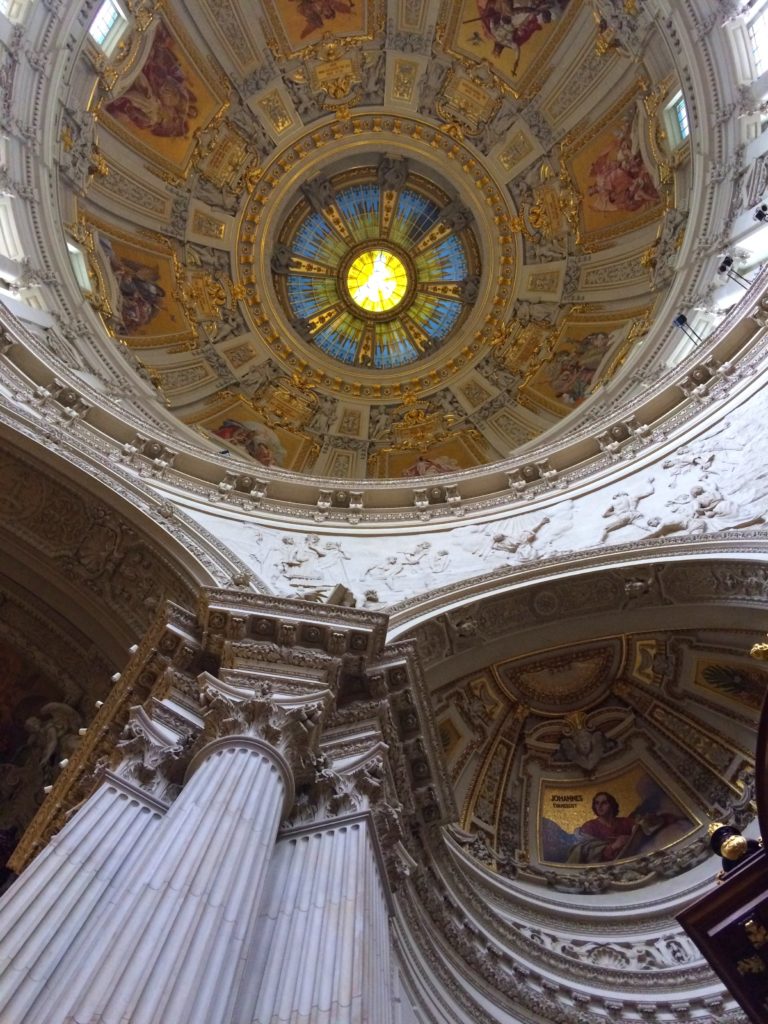 The alter is just amazing. 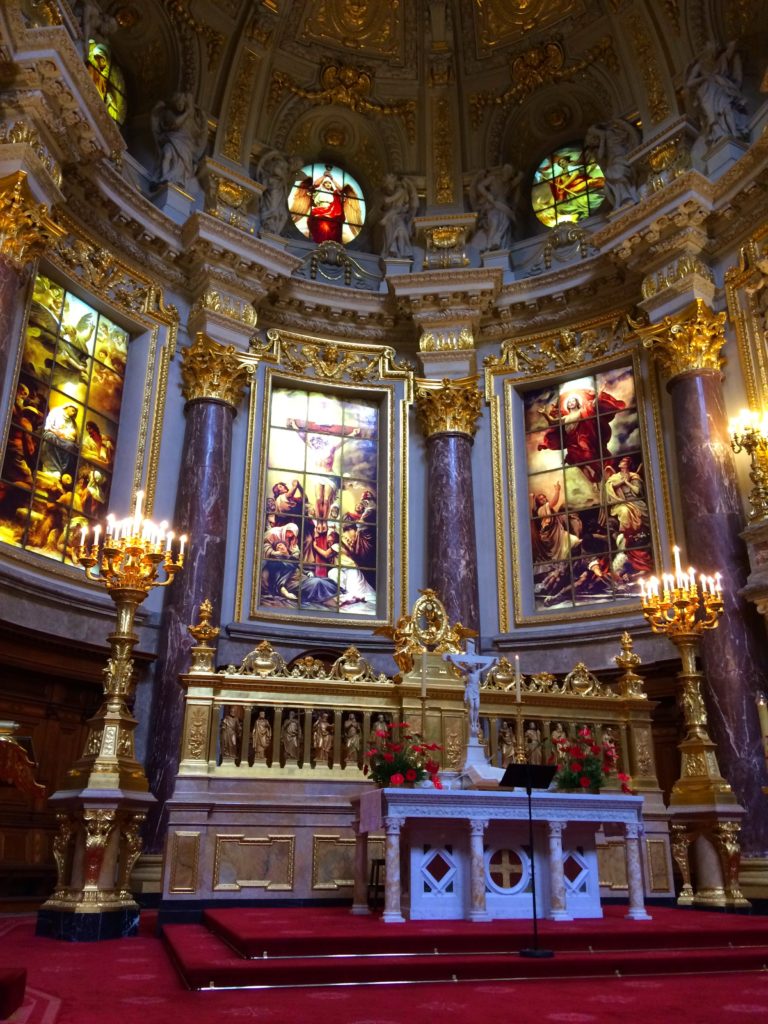 The main speaking pulpit sort of reminds me of a giant Fabergé egg, though. 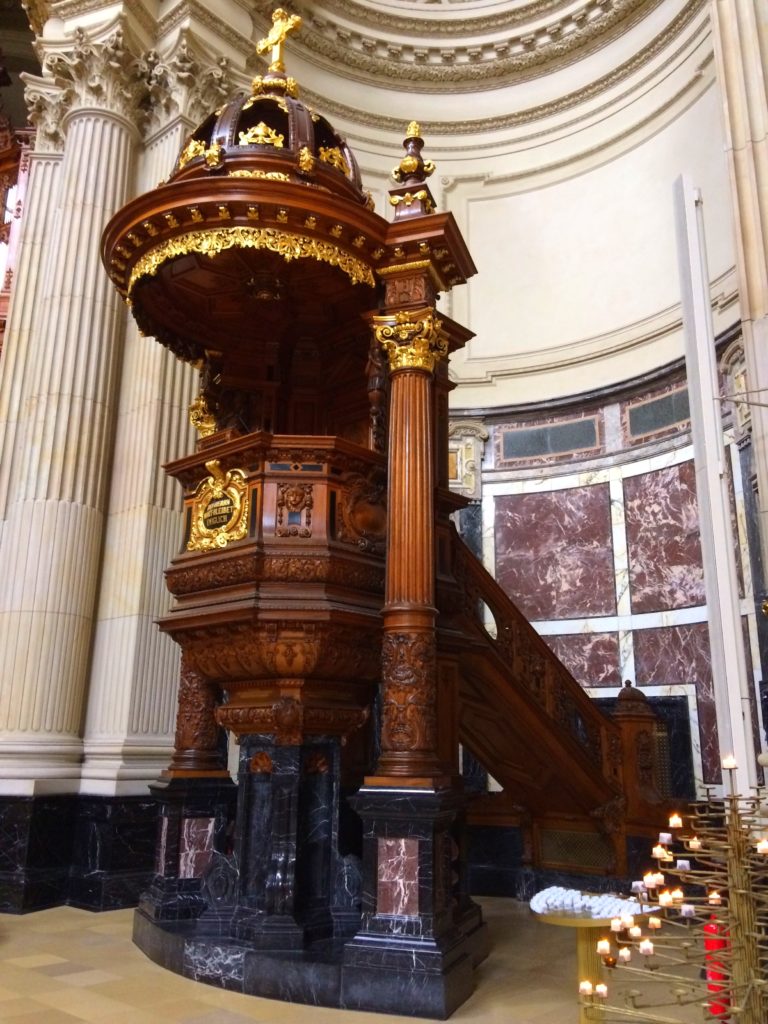 Paying tourists can walk up the stairs to a small museum containing some really cool plaster models of various parts of the church.  These plaster models were used as part of the design process.

Then tourists can walk up even more stairs to the top of the main dome.  There’s a small viewing room that lets tourists look down toward the alter from the main dome above.  That was pretty cool.

Then the self guided tour takes tourists outside the main dome at this high level!  And they can walk around the entire main dome out there!  That was super cool!  I was totally not expecting that to be part of the tour!

The view from up there was amazing!  And just a little scary!  The people down on the ground looked like little ants! 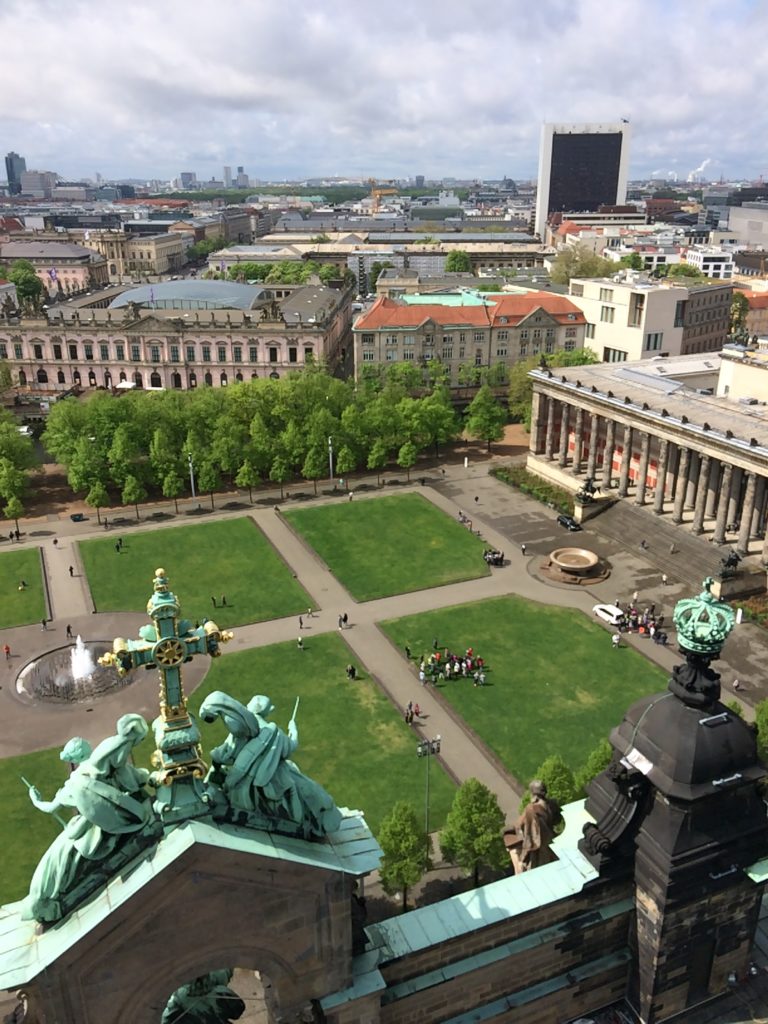 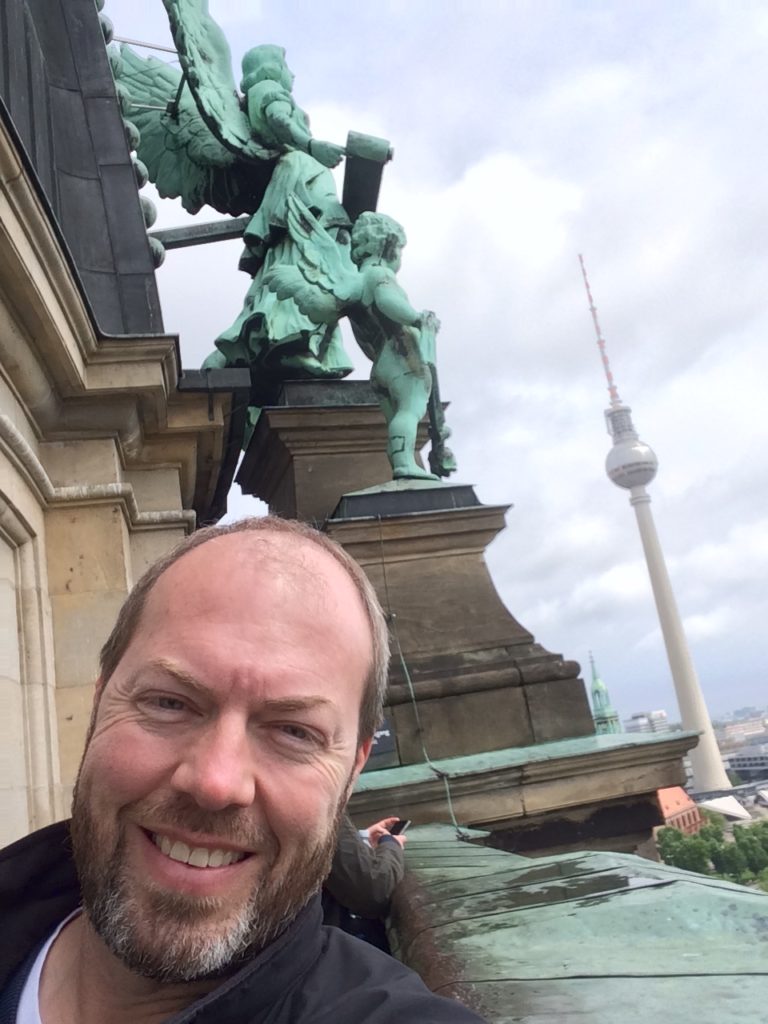 One thing that caught my eye back inside the Berlin Cathedral were the fancy burial caskets at the back of the main sanctuary.  The caskets were all behind bars, but they were still on prominent display.  There were quite a few caskets.  They apparently hold the remains of past royalty and past church leaders and such.

This was a little creepy to me since I’m not used to seeing burial caskets placed above the ground.  One of the caskets even had this scary looking skeleton dude sitting at the foot of his casket.  Writing down his name in his book of death, I suppose. 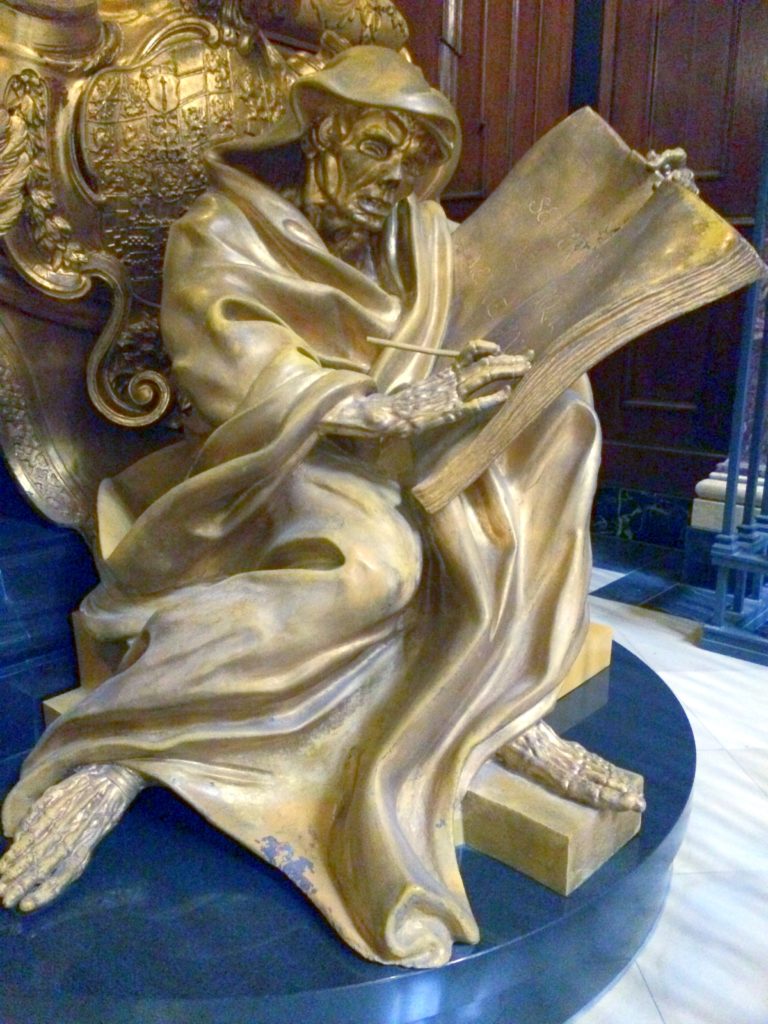 Continuing with the creepy decor, on the wall beneath the big beautiful pipe organ, were these two faceless ghostly looking statues.

Then things got even more creepy for me since the tourists basically have to walk through the basement “crypt” in order to exit the place.  Through the gift shop, of course.  This whole basement crypt thing is probably pretty common, but it was a first for me.  And I was not expecting to have to walk through a ton of really really old burial caskets in a very large and pretty dark basement room, on my way out of the cathedral.  I lightened the below photo quite a bit.  Believe me, it was pretty dark in that crypt.

Most of these old caskets appeared to be made out of metal.  Several of them were super old and it looked like they were even starting to cave in under the weight of their covers.  The second casket in the above photo even appeared to have a couple of bars installed across its cover with bolts attached down into the cover to keep it from caving in more than it already had.  That casket was dated 1601.  That’s pretty old.

One of the last caskets that was on display in this crypt was actually an infant.  It had it’s own little well lit room, along with a painting of the funeral and mourning parents. 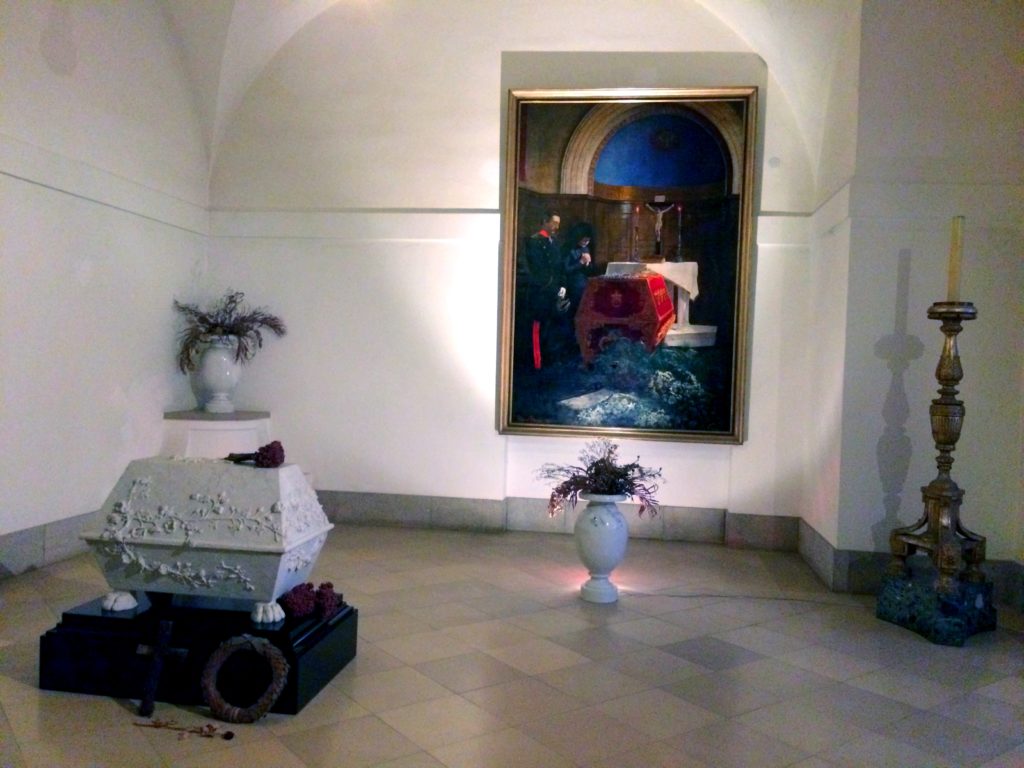 A sign on the wall said:  Nameless Princess – Daughter of Prince Adalbert and Princess Adelheid of Saxe-Meiningen, Granddaughter of Emperor Wilkelm II, September 4, 1915

Nothing like finishing on a sad and somber note.

Next time I’ll publish yet another blog post showing some more of the fun sightseeing that I did in Berlin.  Because in 3 days I saw a ton of cool stuff and it won’t all fit into a single blog post!